“You don’t need to have a bar to be a bartender,” says Shane Beehan. 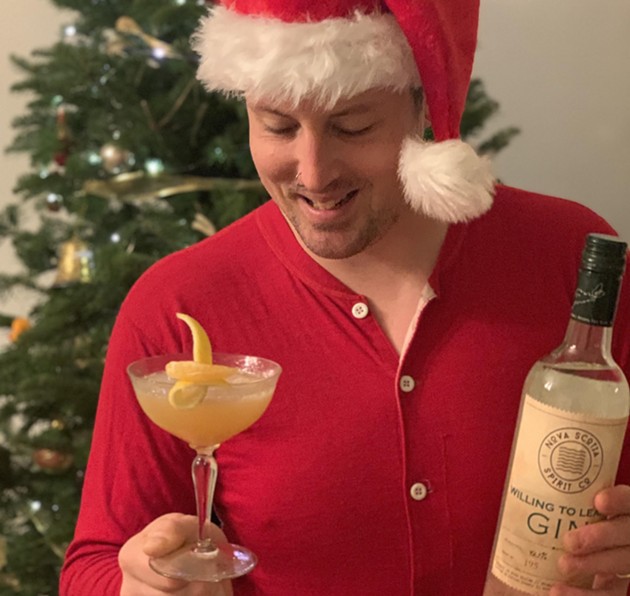 Nova Scotia Spirit Co.
Shane Beehan's first recipe involved gin and clementines. Next week will be vodka and cranberries.
Christmas Cheers! with Shane the Bartender
Presented by Nova Scotia Spirit Co.
Facebook live and Instagram live
Dec 11 and 18 starting at 8pm, free
For the second time since March, Nova Scotia’s bars, pubs and restaurants are closed to the public indefinitely. Whether you have a favourite Friday night spot or rarely hit the town, everyone understands the benefits of a good bartender.

“Bartenders are kind of pillars of community and culture. You come to the bar, you sit down, you chat, they help you, they make you drinks, they connect with you. You share time and space with them,” says Shane Beehan, a bartender with 10 years of experience and brand ambassador for Nova Scotia Spirit Co.

But instead of shaking cocktails on Agricola or Barrington Street, right now Beehan is mixing drinks from home, over the internet, in support of a good cause: Feed Nova Scotia.

“One of the things that I always think about is how this is one of the most celebratory times of the year for a lot of people, and for others, it’s also one of the toughest,” he says in a phone call with The Coast.

For three Friday nights in December, Beehan will host livestreams on Facebook and Instagram starting at 8pm. Over the course of about half an hour, he’ll show people how to make holiday-themed drinks with ingredients that are easy to find.

“You don’t need to have a bar to be a bartender,” he says. “You can create cocktails using ingredients you have at home, ingredients that you might not normally use and it gives you an awareness of your abundance that you personally have."

The first week featured gin paired with a holiday staple–clementines. “I showed them how to make a cocktail using clementine marmalade, and at the same time, using it fresh, muddling the juice. This is for me a way to hopefully inspire people to think about using ingredients in different ways,” says Beehan.

Rounding out Nova Scotia Spirit Co's three core spirits, next week’s recipe will involve rum and eggnog, with a made-from-scratch recipe and a vegan option. Beehan says there aren’t a lot of ingredients in his cocktail recipes, but similar to fresh pasta making, it’s all about how you combine the ingredients to create something spectacular.

“When you make fresh pasta you basically just need flour, water and eggs. You just need very basic ingredients, but it’s mastering the technique that matters,” he says.

For each person watching the free live-stream, Nova Scotia Spirit Co. has committed to donating $5 to Feed Nova Scotia. It's also promised a $20 donation from each sale of its Christmas Cheers! bundle online, and $1 from each 12-pack mixer of Blue Lobster vodka sodas sold at the NSLC. In total, the goal is to raise $25,000.

“Last week was about $800 and we hope to grow that,” says Beehan. Only the live viewers count towards the donation, but since then, almost 6,000 people have watched the videos, about 3,000 each on both Facebook and Instagram. If all those people tune in live this coming Friday, the goal will easily be surpassed.

“The biggest thing is we just hope that this inspires people. Because at the end of the day it doesn’t take a lot to give back,” says Beehan. “I’ve had friends of mine out in Calgary who said 'I couldn’t be there for the live stream, but I’ve donated to Feed Nova Scotia myself anyway.'”

It's not a replacement for the smell, sounds, and tastes of a busy Halifax bar, but it's Beehan's way of making the best of things.

“There’s definitely a bit of burnout from this virtual world, and a lot of people get tired of the Zoom meetings and the virtual stuff. So it’s something that I’m very conscious of,” he says. “I want people to engage so I try to be entertaining, be lively, be charismatic, have jokes, and at the end of the day make sure that people leave knowing how to take some cocktail techniques into their own home bar.”