Forward Alessandro Riggi talks about his first game after returning from a torn ACL in 2018. 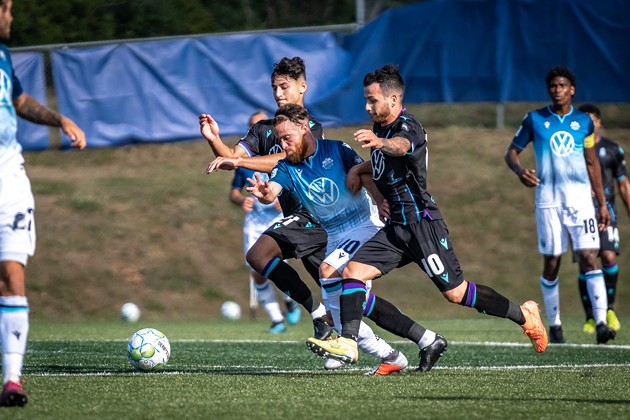 “I saw my picture and I had to look like four times to makes a that was me, and I was like, ‘okay, wow, this is for real',” says winger Alessandro Riggi, a 26-year-old from Montreal.

Not only was it his first game for the Wanderers, an accomplishment in itself, but it marked his first professional match since August 2018. Riggi kept track—it was exactly two years and four days since his career was put on pause when he suffered a serious injury, tearing the anterior cruciate ligament (ACL) in his left knee while playing for Phoenix Rising in the United States League.

“It was a lot of mixed emotions. It was a nice feeling. All that hard work and preparation to finally call myself a soccer player again was definitely worth it with a nice little start there,” Riggi says from Charlottetown, PEI, where the Canadian Premier League is playing a bubble season dubbed the Island Games.

For Wanderers coach Stephen Hart, it was a see-how-it-goes approach when easing Riggi back into a starting lineup.

"I told him at some point, you've got to jump back into the water. He's trained really, really well,” says Hart during a media conference. “It was always in the plans to see how the first 45 go and then we will take it from there. So we felt it's always better in those situations, to start someone rather than to bring them on and they struggle to get into the pace of the game. That led to the decision. We're just happy he's back playing and training at a very good speed."

The forward played 55 minutes of the first game that ended in a 2-2 draw against Vancouver Island’s Pacific FC. Not bad for a player who was only able to start training on the field eight weeks ago.

“Intensity was high, it was definitely reminding me being able to practice and being able to play a season game are two completely different rhythms and fitnesses,” Riggi says.

After getting an early goal from a penalty kick, the Wanderers faltered over a 10-minute stretch the saw Pacific score a pair of goals. Halifax still left the game with a point after Ibrahima Sanoh scored a penalty kick in the 86th minute.

“I was super happy to get a bunch of rust out and to be able to play and finally get that 'when I am I ever going to play a game again?’ out of the system. But it was also a good learning curve to (assess) where I’m at,” says Riggi of a performance he looks to build on.

The Wanderers come up against a big test in their second game, taking on Hamilton’s Forge FC — the defending league champions —on Wed., August 19 at 9pm.

“Obviously we respect Forge and what they've done,” says Riggi of the team that’s started with a win and tie.

“It's definitely a motivation for us because if we can come out of that game with a win, it's a massive statement towards the league and it would be such a boost of confidence for our team if you compare to Forge who have been playing together for much longer than this team.”

Last season, the teams each won a game and had two ties across four games. The two draws saw the Wanderers in the lead for most of both games, but the eventual champs stormed late goals to steal valuable points in the standings.

The game against Pacific on Saturday showed promise for the new-look Wanderers, particularly up front where forward Cory Bent was named “man of the match.” The 23-year-old played for Cape Breton University last year and showcased his speed and relentlessness from the right wing.

The Wanderers also saw forward Alex Marshall come on and play the final 20 minutes. The Jamaican player was late joining because of international travel restrictions, linking up with his new team weeks before kickoff, but showed he’s quickly adapted to his new teammates.

“I think we just need to focus more on the transition from the backline to the strikers to get the ball through the midfield and move that around more. So then it's going to create more opportunities for us up top,” says Riggi.

“There was definitely some positives, things to build on, but we also know that we need to work on to get better.”