No bus, no sidewalk, no change.

The group will march together to Africville to protest the lack of safe access to the historic site.

“People will arrive here, we’ll talk about the importance of the walk, and then we’ll talk about the importance of remembering the legacy of Africvillians and the history of Africville,” says Juanita Peters, general manager of the Africville Museum. This year will also include the unveiling of a shipping container mural to honour the 150 birthday of Black Nova Scotian boxer George Dixon.

The museum director says she’s always worried about the safety of museum guests who walk, particularly older visitors or tourists who don’t know the area.

“I always feel so sad and anxious and afraid for people who take public transportation to Barrington Street or down below and then walk down here. Cause the traffic is, it’s heavy trucks you know, there’s no sidewalk,” says Peters.

She’s gone as far as to drive some groups back to their hotels so she knows they’re safe and sound. “We’re not talking about just an unpleasant walk, we’re talking about a dangerous walk,” Peters says.

lindellsmithhfx.ca
The Walk, Ride & Roll first took place last year, but Africville was ignored by the city long before that
The Africville Museum is on the site of the historically Black community at the northern tip of the Halifax peninsula. It was once home to hundreds of residents but was neglected, subjected to environmental racism and finally bulldozed in the late 1960s. Africville residents paid city taxes but weren’t serviced by city water and sewage, garbage collection or paved roads.

In classic delayed-remorse fashion, our government designated Africville as a National Historic Site in 1996 and Halifax Regional Council issued an official apology in 2010.

“It was bad then and it’s just as bad now. Back when we lived in Africville in the wintertime particularly it was atrocious. We’d get a bad storm and we’d be snowed in out there for two days before we’d see a plow come through,” he adds.

Carvery says Africville once had several entrance points, including off Barrington Street, from the Windsor Street exchange and at the end of Novalea Drive. "When it got to Africville of course, it turned into a dirt road, but at least it was a road," he says.

Google Maps
The route the walking group will take to Africville on Saturday.
But those are all gone now except for the entrance on Africville Road, off Barrington Street, where there's no sidewalk, a narrow shoulder, and vehicles zoom by as they come off the MacKay Bridge. Carvery says former residents and their descendants have been asking for safer access for years.

“We’re still in the same place, we’re still asking the city. We’ve been involved with the active transportation folks at the city, looking at improving access to the site, but nothing concrete has come out of it up to this point in time,” he says.

Saturday’s walk will include a police escort to ensure attendees are safe from passing traffic. “Traffic going to and from that bridge do not obey the traffic signs, you know, they’re well over the speed limit when they’re driving along there. And it's very small shoulder, a very small shoulder. So the police are going to escort us to ensure that we get out there safely and get back safely,” says Carvery.

Peninsula north councillor Lindell Smith, who’s been part of organizing the event, says it's important that safety issues are given centre stage.

“What’s important about this, it’s a family-friendly event. It’s being promoted as a protest but also as an event because it is something that people enjoy. But you also have to realize why this is happening, because it is very dangerous to walk down to Africville,” Smith says.

The District 8 councillor says Africville doesn’t have the same access as other sites in the city, despite the fact it includes both a museum and a park.

“It’s easy to kind of look past the like, how good the event is and you know, people are smiling,” he says. “But there is an aspect of the injustice of the fact that you can’t just pick up and walk to Africville like you can walk to the Commons or walk to Point Pleasant Park.”

Smith says he’s continuing to push the issue at council and is meeting soon with active transportation staff to discuss how the Windsor Street Exchange revamp can include access to Africville.

“There will be something, don’t know what that is cause I think the community has to lead that discussion, not politicians and bureaucrats in a room,” he says.

Smith says he’s also pushing for the extension of the Barrington Street active transportation route to be extended past its current endpoint at Niobe Gate, all the way to Africville.

Africville Museum
“The next piece is from Niobe Gate to Africville, but that also includes Irving Shipyard, the Port Authority, so there’s some work to do, but that is an ongoing project,” says Smith.

But the councillor also understands why people are fed up with the lack of response from the city. “There’s already projects in the pipe, but it’s been a long time and I think people are just still continuing to advocate for what’s needed,” he says.

Peters thinks rerouting a bus that already travels down Barrington Street or Lady Hammond Road is one other solution. “All we’ve heard was that it would take a bus off the route by five minutes, and we’re good with that. Five minutes is just five minutes,” she says.

But after countless years of protesting, former Africville residents are still asking for the same thing: safe access to the land they never wanted to leave in the first place. 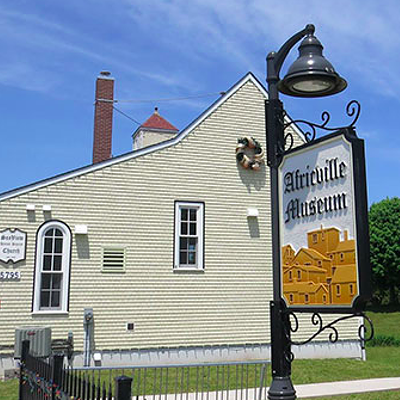