Waka Okabayashi wants to be a plant

For now, she’ll paint them. 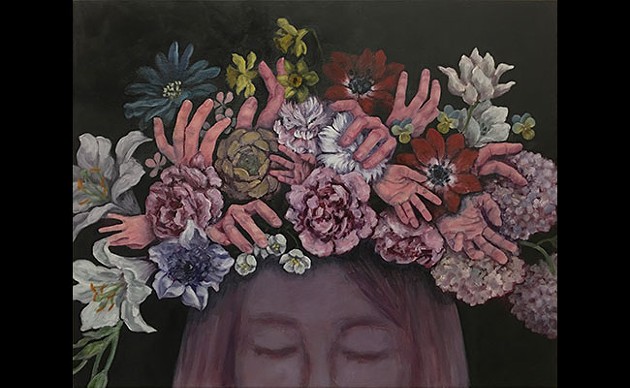 submitted
Okabayashi is “trying to find the meeting point of human and plant” in her work.
Waka Okabayashi, I want to be a plant
To February 17
Anna Leonowens Gallery 2, 1891 Granville Street

In the mind and work of Waka Okabayashi, life really does imitate art. The NSCAD student, who moved from Japan to Canada after middle school to begin studying English, says she draws inspiration for much of her current work as an artist from a Baroque sculpture.

"It started with this sculpture by Bernini, called 'Apollo and Daphne,'" she says. "It depicts Daphne turning into a tree, and when I saw that my first thought was 'I want to be a plant too!' Ever since then, I've been trying to find the meeting point of human and plant. And here at NSCAD, I figured out that hands were something that are almost closest to plants in my mind—the shape, the colour sometimes. So [in my work] I've been focusing a lot on my own hands, and then relating them to plants."

Bernini's sculpture, depicting Daphne in the middle of her transition into a tree, questions the hard lines often drawn between humans and the natural world. Okabayashi's work achieves a similar effect—selections from her current collection, I want to be a plant, are on view at the Anna Leonowens this week. Some of her paintings feature detailed renderings of plants or hands, while others combine elements of the human form with elements of nature to pull into focus how and why we interpret these realms in the ways that we do.

"I think it's something really peaceful to be a plant. They don't really have strong emotions that humans are so often controlled by," she says. "They're just living to live, and pass on to the next. That thought is very calming and soothing to me.