Voice of The City: Abuse and violence thrive in isolation and silence

Canadian's Battered Women’s Support Services hotline has seen a 300 percent increase in calls because of COVID, 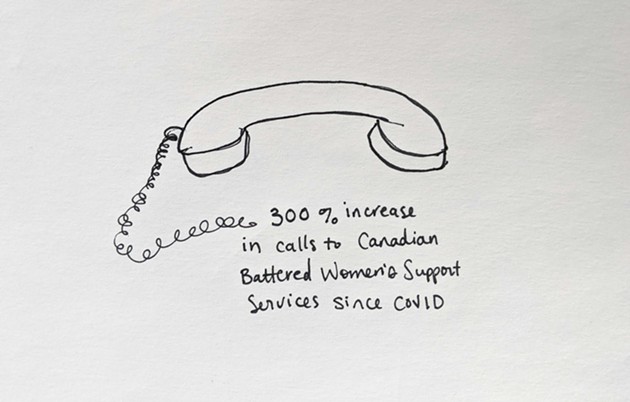 Caora McKenna - The Coast
The first person to die from a COVID-19-related death in Nova Scotia was not someone who contracted the virus. It was a woman murdered by her abusive male partner, whom she was forced into isolation with due to social distancing measures.

In early April, Stephen Beckett was arrested at his home in Hammonds Plains and charged with the second degree murder of Tracey Mackenzie in what the Public Prosecution Service is calling “domestic homicide.” This death is no less predictable or preventable than the deaths caused by the illness itself. In fact, social distancing measures and the widespread climate of uncertainty due to the pandemic will cause an increase in both rates of domestic violence and the severity of incidents.

Anti-domestic violence experts have long argued that abuse and violence thrive in isolation and silence. Abusers frequently use isolation as a tool to control survivors and as a way to hide their actions from others. Sometimes this means physical isolation, such as preventing a partner from regular contact with their friends and family. Other times abusers take advantage of pre-existing social isolation by intentionally targeting people who are already less connected to family and community, or people who are already ostracized in some way. During the COVID-19 pandemic, social distancing controls have delivered an excuse for increased isolation right into the waiting hands of abusers.

But it’s not just people who have used abuse against their partners in the past that we have to worry about. Economic strain, job layoffs, the stress and fear associated with avoiding the disease, on top of generalized uncertainty about the future, all add major stress and strain to even the healthiest relationships.

In times of uncertainty people often respond by trying to find control over some aspect of their lives. Some people might do this by establishing a rigid daily routine and throwing themselves into work. People with eating disorders are particularly vulnerable to relapse at this time because of the desire for control. Still, others in our society will fulfil that missing sense of control by abusing members of their household—most often women and children.

Leaving an abusive relationship is one of the hardest decisions a person can make. It often means facing financial loss, social stigma, broader family conflict, uncertainty about the future and a major upheaval to everyday life. Even more troubling, women are most at risk for intimate partner homicide when they attempt to leave an abusive relationship. This is why it is so important for survivors to work with domestic violence advocates at women’s centres and transition houses in order to create a safety plan.

But this doesn’t mean that the average person has no role to play in supporting survivors in their community. It is especially important to check in regularly with friends and loved ones during social distancing. This means more than asking, “How are you?”

We shouldn’t be afraid to ask more pointed questions about the relationships that may be under strain because of the pandemic. This could mean gently inquiring, “How has being stuck in the house with your partner impacted your relationship?” It also means not changing the subject or staying silent if your friend loved one hints at or explicitly mentions abuse in their relationships.

Have the courage to face the conversation head-on by asking questions and listening carefully. Let your friend or loved one know that they do not deserve abuse of any kind and that there are places they can go to get help. We may have to maintain physical distancing for the time being, but what we need more than ever is social and community solidarity.

Since the beginning of the pandemic, the Canadian Battered Women’s Support Services hotline has reported a 300 percent increase in calls from survivors who are facing increased restriction and control from abusers. Some abusers are using the pandemic as an excuse to keep survivors isolated from family members and children, to keep them from leaving the house at all or to monitor their movements through tracking apps on smartphones.

This increase, as well as the escalation of domestic violence after major disasters, has been documented by researchers before. It happened with Hurricane Katrina in New Orleans and in other major epidemics like Ebola, H1N1 and SARS. In fact, the secretary general of the United Nations issued an appeal on April 5 for peace in homes around the world and urged all governments to make women’s safety a priority in their pandemic responses.

On March 29, prime minister Justin Trudeau announced $50 million earmarked for women’s shelters and sexual assault centres as part of his government’s pandemic measures. This money will be distributed through the Canadian Women’s Foundation, but it is yet to be seen how it will happen and if it will be enough. On March 27 premier Stephen McNeil announced a $200,000 investment to support transition houses as well as other organizations that serve vulnerable women and children in Nova Scotia. The details of how and where the money will go have also not been sorted out yet, but we know transition houses are a key resource for women and children fleeing family violence.

These are temporary shelters where women and their children can stay and receive the support needed to find safe and affordable housing. So far all of the transition houses in Nova Scotia are open and working to transform their accommodations in order to maintain proper social distancing protocols. This may mean that some transition houses will have fewer beds to offer than under normal circumstances. Any funding offered to transition houses in Nova Scotia as part of the pandemic response will go a long way in assisting with these new measures.

The breadth of effects COVID-19 will have on our communities is vast. Supporting women and children at this time is crucial. Getting funding to the organizations working to help them is essential.

If you or someone you know needs help, contact the Transition House Association of Nova Scotia at 1-855-225-0220 or visit nsdomesticviolence.ca.

For more information on safety planning, download this PDF resource.

From day one, advocates knew shooting was linked to domestic violence