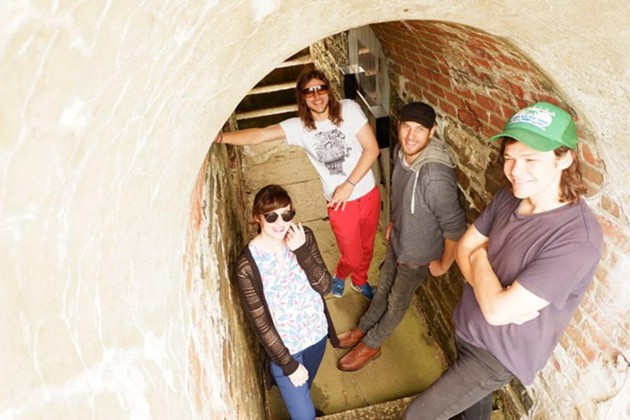 Sit down and have a watch of The Brood's extremely timely video for "First Day of School", directed by bassist Billy Habib-Taylor, a song off of its upcoming album Transistor, due for release October 27, with an album release party at Riverport's Old Confidence Lodge on October 28. Tickets will go on sale September 5.

"First Day of School" has a nostalgic poignancy while simultaneously making me happy as heck that I'm not in school right now. Showcasing The Brood's inimitable psych-prog-experimental weirdness and stunning musical chops, Transistor will cover such disparate themes as "being out of touch, living with your parents as an adult, celebrity chefs, the rigors of bars and partying, and experiences from school in the now distant past," says guitarist and vocalist Seamus Erskine. As well as "vacation, road trips and destinations."

"Sometimes we'll just be jamming together and we'll come across something that will turn into another thing. The lyrical themes that come about can be directly traced to the media we're consuming at the time," says Erskine  "The track 'Munchies' was inspired by an episode of the Vice Youtube show 'Chef's Night Out.' We were just jamming one day and then over the next year we developed the musical arrangement."

"'First Day of School' went through a lot of musical arrangements—but it was written around late summer because of that 'back to school' feeling."

After the release, the band will perform at the Harvest Jazz & Blues Festival in Fredericton, then Hamburg, Germany's Reeperbahn Festival.