The public libraries begin screenings from the movie palace this weekend. 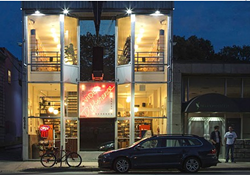 The Video Difference era ended months ago, as the Quinpool Road destination rented its last DVD on August 15. With the Halifax landmark closing, there was worry its impressive vaults of indie, Canadian and old-school movie offerings would be lost (or, at least, scattered amongst private collections). Coast writer Tara Thorne chronicled the store's credits rolling this summer. But there is going to be a small, straight-to-video sequel.

See, when both the public libraries and Dalhousie swooped in to cherry-pick some chunks of the Vid Diff catalog, it felt like a mixed blessing: How did they choose which films were worthy to keep? Where did the funds come from to purchase them? How open will these vaults be to the public?

It’s a little messy, maybe, but one thing’s for sure: The shuffle of celluloid gives us the opportunity to catch some critically acclaimed classics at various library screenings this fall and winter. It's not the same, sure, but it's something.

First on the bill? Steven Soderberg’s 1993 feature, King of The Hill. Playing at the Central Library this Friday, the movie follows a Depression-era youth struggling to survive on his own while his father works as a travelling salesman and his mother is committed to a sanatorium.

Summer might be gone, but we’re still basking in Video Difference’s glow.