Alexander Zyuryaev
Florence Pugh, one of the stars of Olivia Wilde's Don't Worry Darling—the premiere of which you may have read about recently—on the red carpet at the 79th Venice International Film Festival.

The 79th Venice International Film Festival capped off its final days with a flurry of premieres and celebrity red carpet appearances.

Michelle Zyuryaeva’s special coverage for The Coast captures all of the highlights from one of the world’s oldest and most renowned film fests.

The festival marked its third day Friday, with enthusiastic crowds waiting since early in the morning for the arrival of actor Timothée Chalamet for the premiere of in-competition film Bones and All by Italian director Luca Guadagnino. The all-star cast includes Chloë Sevigny, Mark Rylance and Canadian actress Taylor Russel (Waves, Words on Bathroom Walls, Escape Room), who graced the red carpet with a very glamorous presence. 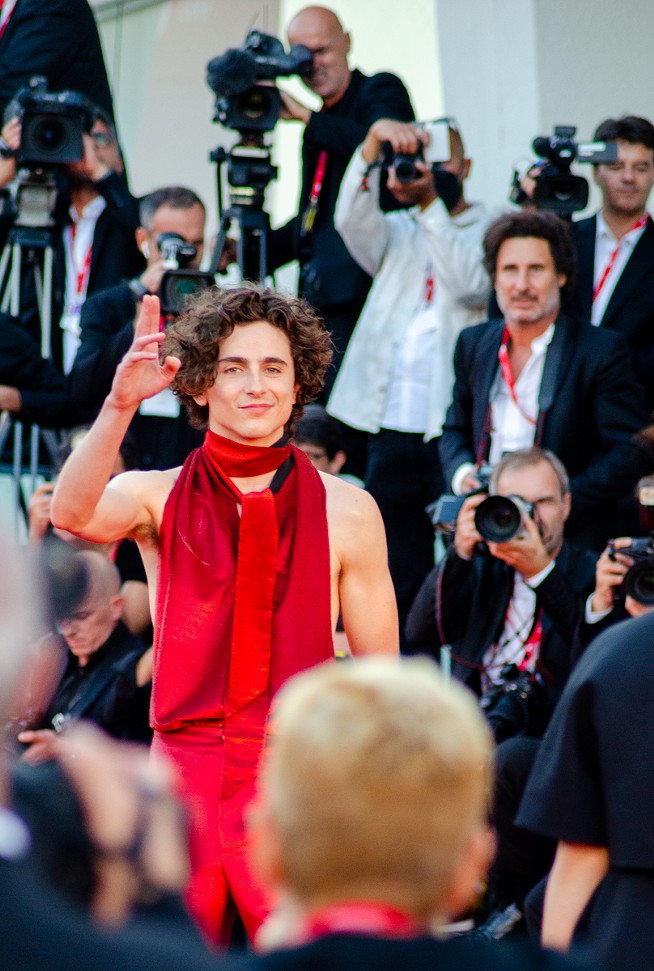 Chalamet, known for his funky and glamorous red carpet outfits, stepped out in a bold shiny red jumpsuit made by designer Haider Ackermann. The waiting crowd was the largest for any of this year’s Venice premieres up to that point.

The previous evening saw the premiere of in-competition drama Un Couple, about the relationship of Leo Tolstoy and his wife Sophia from director Frederick Wiseman, who made a lovely appearance on the red carpet with actress Nathalie Boutefeu, who stars as the wife of Tolstoy.

Saturday marked the fourth day of the festival and was packed full premieres of films in the in-competition selection, starting in the afternoon with All The Beauty and the Bloodshed by Laura Poitras; Monica by Andrea Pallaoro, starring Trace Lysette, Patricia Clarkson, Anna Paquin, Adriana Barraza, Emily Browning and Joshua Close; the in-competition film Argentina by Santiago Mitre, with Ricardo Darin, Peter Lanzani, Alejandra Flechner, Santiago Armas, Carlos Portaluppi and Laura Parades; and The Pearl, by Ti West and starring Mia Goth and David Corenswet.

The first weekend finished on a high note with the arrival of actress Penélope Cruz for the premiere of L’Immensità by director Emanuele Crialese. Cruz, who won the prestigious Coppa Volpi last year for her performance in Pedro Almodóvar’s Madres Paralelas, made a glamorous and elegant appearance for the red carpet premiere, along with the cast, including actress Luana Giuliani and Vincenzo Amato.

Young actress Sadie Sink (Stranger Things) looked glamorous for her arrival and created huge excitement among the impressive crowd of cheering fans. Her fun energy created an especially upbeat atmosphere for the last premiere of the evening, The Whale.

Director Darren Aranofsky was in attendance, along with actor Brendan Fraser, who stars in the lead role, as well as actress Hong Chau. The Whale is an in-competition film, and a contender for the prestigious award for best film. 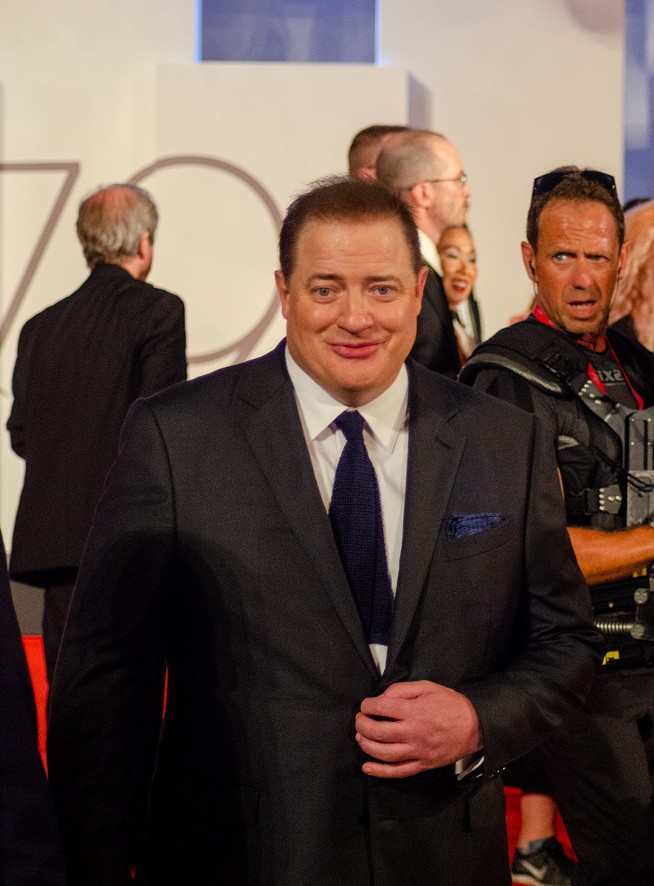 Pop star Harry Styles arrived on the red carpet for the premiere of Don’t Worry Darling. Unless you've been living under a rock, you've probably already heard some things about the premiere and other tales from the set of the movie.

Styles looked dashing as he stepped out and conveyed an excited, yet relaxed mood, despite the incredible crowd gathered to see him. Director Olivia Wilde and actress Florence Pugh attended the premiere as fans cheered on, making the evening one to remember. Don’t Worry Darling was screened in the out-of-competition sector.

In the afternoon, we saw the premiere of the film The Banshees of Inisherin, by Martin McDonagh and starring Colin Farrell, Brendan Gleeson, Kerry Condon and Barry Keoghan, who were all in attendance and arrived to a film-themed soundtrack.

Another star-filled day started with the premiere of the in competition film The Eternal Daughter, directed by Joanna Hogg and starring Tilda Swinton and Carly-Sophia Davies.

The special event of the evening was the ceremony for the Cartier Glory to the Filmmaker award, which was presented to legendary director Walter Hill. Hill’s films include Wild Bill, The Driver and The Long Riders, which was nominated for the Cannes FIlm Festival Palme d’or. Hill's career spans decades, beginning in the early 1970s, and ranges in style from classic Westerns to action-packed thrillers.

The ceremony opened with an introduction from Alberto Barbera, director of the festival, followed by a tribute to Hill by actor Christoph Waltz, whose personal and witty speech captured the talent and allure of the great director.

As Hill took the stage to receive the award, we were left in awe of his gracious, elegant and dignified presence.

The ceremony was followed by the screening of Hill’s out-of-competition film Dead for A Dollar, a Canadian/US co-production. The star-studded cast includes Waltz, who made a most distinguished appearance on the red carpet, and seasoned actors Willem Dafoe, Benjamin Bratt, Warren Burke and a graceful Rachel Brosnahan, whose appearances drew large cheers from the crowd.

The dashing Hugh Jackman arrived to an enthusiastic crowd for the premiere of his film The Son, by French director Florian Zeller and starring Anthony Hopkins, Zen McGrath, Laura Dern and Vanessa Kirby. The Son was one of the 21 films in competition for the prestigious Golden Lion for best film.

Michelle Zyuryaeva
The cast of The Son, including High Jackman, and Laura Dern.

The late evening had the premiere of Dreamin’ Wild, an out-of-competition film directed by Bill Pohlad, and starring Casey Affleck, Noah June, Zooey Deschanel, Chris Messina, Walton Goggins and Beau Bridges. Eager fans got to see Affleck and Deschanel on the red carpet.

Brad Pitt, producer of the film Blonde, made a surprise visit to the red carpet looking as handsome as ever in a classic tuxedo. Pitt arrived along with director Andrew Dominik, the elegant Ana de Armas and acclaimed actor Adrian Brody.

Blonde is one of the films in competition for the Golden Lion. The heart-wrenching film, a fictionalized account of the life of Marilyn Monroe, received a standing ovation from the audience.

The outstanding lead performance by de Armas received praise, making her a strong contender for the Coppa Volpi for best actress.

Highlights included the premiere of Italian director Paolo Virzi’s film Siccità, which is set in Rome, and stars Italian actress Monica Bellucci, who looked stunning as she arrived on the red carpet.

Other premieres included the in-competition film Shan, Dakheli, Divar (Beyond the Wall), directed by Vahid Jalilvand and starring Navid Mohammadzadeh and Amir Aghaei; and The Matchmaker, directed by Benedetta Argentieri.

This day saw the premieres of many films, including Nuclear by the legendary director Oliver Stone and based on the book A Bright Future: How Some Countries Have Solved Climate Change and the Rest Can Follow, by Joshua S. Goldstein and Staffan A. Qvist.

Golden Lion for Best Film to:

ALL THE BEAUTY AND THE BLOODSHED by Laura Poitras (USA)

Luca Guadagnino for the film BONES AND ALL (USA, Italy)

Cate Blanchett in the film TÁR by Todd Field (USA)

Colin Farrell in the film THE BANSHEES OF INISHERIN by Martin McDonagh (Ireland, UK, USA)

Award for Best Screenplay to:

MARCELLO MASTROIANNI AWARD for Best Young Actor or Actress to:

Taylor Russell in the film BONES AND ALL by Luca Guadagnino (USA, Italy)

The ORIZZONTI Jury of the 79th Venice Film Festival, chaired by Isabel Coixet and comprised of Laura Bispuri, Antonio Campos, Sofia Djama and Edouard Waintrop, after screening the 18 feature-length films and 12 short films in competition has decided to award:

ORIZZONTI AWARD FOR BEST FILM to:

Tizza Covi and Rainer Frimmel for the film VERA (Austria)

CHLEB I SÓL (BREAD AND SALT) by Damian Kocur (Poland)

ORIZZONTI AWARD FOR BEST ACTRESS to:

ORIZZONTI AWARD FOR BEST ACTOR to:

ORIZZONTI AWARD FOR BEST SCREENPLAY to:

VENICE SHORT FILM NOMINATION FOR THE EUROPEAN FILM AWARDS 2022 to: