Vadell Gabriel loses at love but wins with rhymes

Halifax’s hero of new jack swing drops an EP for the brokenhearted. 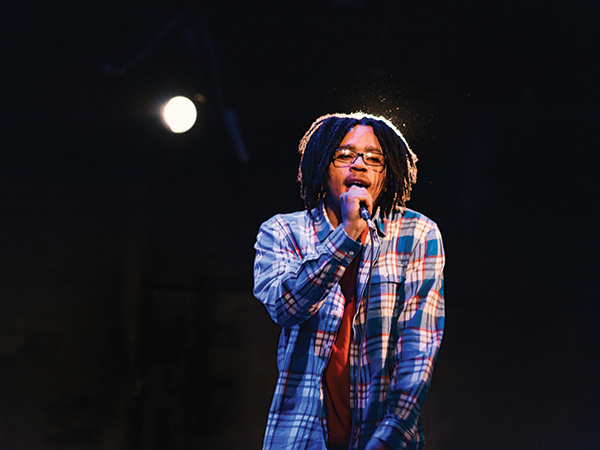 F or Seth Glasgow—who raps under the name Vadell Gabriel—Valentine's Day isn't a romanticized lovefest. On his new EP Lover's Pain, he explores his own misfortunes in love with unflinching vulnerability—and hopes that by unpacking his own woes, he can show those with nowhere to be on February 14 that they're not alone.

The lyrics across the EP are an articulate introspection into Glasgow's struggles with dating culture, past relationships and self-confidence, simmering overtop beats in a style that he calls nerd jack swing (a punchy mix of nerdcore and new jack swing, the genre popularized by Rhythm Nation-era Janet Jackson).

Glasgow says that Lover's Pain is one of his best releases yet, but doing a Valentine's Day EP was not his initial intention. The project happened by chance.

"'No Game, Part 2' was the first song that was technically finished. It was supposed to be released in early winter," says Glasgow. "But I couldn't get a verse done in time, so I said, my birthday is four days before Valentine's Day, why don't I just release it then?"

"No Game, Part 2 (featuring Yangsta & LEX the Lexicon Artist)" opens Lover's Pain. It pits Gabriel against Yangsta, his friend and long-time collaborator. While it was a friendly face off, Glasgow said he still had to hold himself back.

"There's a lot of real-life history on that song. When I originally wrote my rebuttal verse on the remix it got really personal. I had to rewrite it. I have a lot of receipts, but out of respect I took it easy on him."

Though framed as an argument, Glasgow uses the track to convey a positive message about self-confidence and self-love.

"There were a lot of factors that went into me having no game, but I also have to work on myself, my mental health and get back into the zone before I can get game."

On "Orange (Too Good to Be True)," which features Toronto folk-rock duo Moscow Apartment, Glasgow discusses a toxic relationship and the harassment that ensued. His relief is clear as he throws the final shovel of dirt on its grave.

"This is a branch off of 'Rule 5,' which is about the same person, but it goes into more detail about what they did— everything I said in the song is stuff that legit happened."

"The Sure Shot" follows up catharsis with a grounded look forward from Glasgow as he discusses his search for love, while dropping plenty of video game references in the process. The track radiates confidence and positivity.

"I wanted 'Sure Shot' to be the antithesis to 'No Game.' This is me having game, but I'm still a giant nerd at heart."

The EP closes with "Ryako's Groove," an infectious new jack swing instrumental Glasgow made in collaboration with DJ Chidow.

Lover's Pain is available on Glasgow's birthday, February 10, via his bandcamp page, vadellgabriel.bandcamp.com, or just hit play below.