Alvéole
A beekeeper shows off the bees in a rooftop hive during an inspection.

Alvéole already has nine clients and more than 15 bee boxes around HRM.

“According to all known laws of aviation, there is no way a bee should be able to fly. Its wings are too small to get its fat little body off the ground. The bee, of course, flies anyway, because bees don't care what humans think is impossible.”

Yes, that’s the intro from 2007 box office smash hit The Bee Movie (seriously, it made $293.5 million worldwide). While the movie turned bees into a massive meme, it also brought the small, winged insect into the spotlight. Not just for its cute little stripes, fuzzy antennae and apparent ability to seduce humans, but also for its pollinating power.

Bee-lieve it or not, bees are the reason we can eat fresh fruits and veggies. The bee’s job as a pollinator means that bees play an integral part in ecosystems, helping plants grow and reproduce, which will then provide shelter and food for other animals, not to mention us humans. And Nova Scotians will soon have another chance to see the magnificent creatures up close.

“We want to share the passion that we have for bees, and share that the importance that those bees have in our food system and in our way of living right now,” says Benoit Trépanier, beekeeper team manager for eastern Canada with Alvéole, a Montreal-based company that’s expanding to Halifax this summer. “Our main mission is to talk to people and reconnect people with nature and talk about sustainability and raise awareness about the environment and all the issues that we face right now.”

Alvéole means honeycomb in French, and since 2013 the company has placed bee boxes in 85 cities across North America and Europe, partnering with schools, business owners and apartment complexes that want a bee box on their property. There are nine clients in Nova Scotia so far with more than 15 hives, and Halifax locations include Sunnyside Mall, the Halifax Shopping Centre and the Halifax waterfront.

“It’s a turnkey service, what we sell,” says Trépanier. “The client will pay us to install a beehive there, take care of those bees for the whole season, extract honey and give them that honey.” 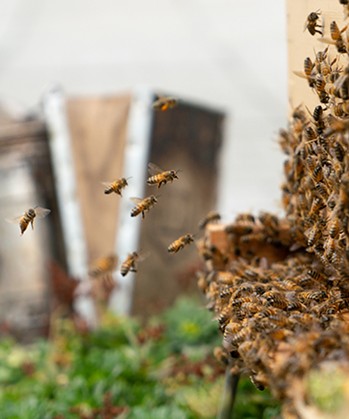 Each client receives at least 100 jars of honey, and will also be invited to watch as a beekeeper checks on the hive every three weeks. “We take the time to do our inspections and be very slow and very respectful to the bees so we don’t anger them,” says Trepanier, “and they will stay very peaceful with us and they won't be aggressive.”

There aren’t actually any bees in the hives yet, but they are expected to arrive by the end of May (sourced from inside Nova Scotia since imported bees are not allowed). “We have to go through the government to get those hives and be sure that we treat those hives, that there’s no sickness or pests in the hives,” says Trepanier.

The bee boxes will be made up of 95 percent worker bees, five percent drone bees and one reigning queen bee. The workers are the ones gathering nectar and bringing it back to the 50,000 other bees that will inhabit the hive by the peak of the season.

“The bees will dehydrate the nectar and then it will concentrate and become honey,” says Trepanier. “This is what we're going to harvest at some point, us humans. But at Alvéole, because honey isn’t our main goal, we’re going to leave [the extra] honey inside the hive for bees to feed on.”

After harvesting the honey in late summer, the bees will still have enough time to gather more nectar to survive the winter, at which time the Alvéole beehive will be sealed with insulating foil and foam before nature’s built-in insulation—snow—falls. The bees don’t hibernate. Instead, “they move inside the beehive they will warm it up.”

Bees in the summer only have a lifespan of about one month, but don’t worry, the beekeepers aren’t opening Schroedinger’s boxes of potentially dead bees each spring. “It’s different when they are not foraging, a winter bee will live between three to four months.”

Throughout the summer, visitors to the Halifax waterfront may come across two beehives along the boardwalk. “When they are closed, people can have a look at them, but they should never open the beehive when you don’t know what you’re doing in there. We have some warnings saying ‘live bees at work,’” says Trepanier. “We’re quite lucky at Alvéole because people love bees and almost nobody wants to do vandalism on a beehive. So we don’t lock them, and hopefully people will leave them be.”

The bees can travel up to 5km from their hive, but expect to see bees flying around and going in and out of the boxes. “There is what we call a landing strip on both sides, and at the center of it the bees will come in and out,” says Trepanier, who finds it calming to watch the bees as they work.

“I compare it often to looking at a campfire or looking at the like the ocean and the waves,” he says. “You look at all the traffic of bees going in and out of the beehive and it's amazing and it's so peaceful. You can be surrounded by hundreds of bees and none of them care about you, because they have a task. They will leave you be.”