White supremacist John Mark Tillmann's book, Stealing the Past, has been put on hold by Nimbus.

SCREENSHOTS
On the left, the book jacket for Stealing the Past. On the right, a photo of John Mark Tillmann holding one of his Nazi collectables.
UPDATE: Nimbus has issued the following statement about Tillmann's book:


“In August 2017, Nimbus signed a contract with Mr. Tillmann after receiving a manuscript submission from him, which he had written in prison while serving a nearly eight-year sentence for over forty charges, including fraud, theft, possession of property obtained by crime, possession of a forged document, and obstruction of justice. We immediately knew Mr. Tillmann’s story was of immense public interest. It contained no racist views and focused exclusively on his career as an international art thief and his time in prison. Nimbus entered into a legally binding contract with Mr. Tillmann, which specified that Mr. Tillmann would not profit from the book and that all of his royalties would be sent directly from Nimbus to a registered local charity.

“Mr. Tillmann’s memoir is currently on hold while Nimbus consults with legal counsel. We will announce our decision regarding the project once those conversations have concluded. Until that time, we will not be making any further statements.

“We are also in the process of creating a new policy for inclusion in all contracts to avoid any situation like this in the future.

“To anyone who has been upset or harmed by this story, we sincerely apologize. This was never our intent. We have learned a valuable lesson and will continue to publish the stories of this region in a respectful and responsible manner.”


A white supremacist art thief who calls Adolf Hitler “one of the greatest men in history” was going to have his tell-all book published this fall. But that project is now on hold, according to Halifax-based publisher Nimbus.

Stealing the Past: My Life as an International Art Thief by John Mark Tillmann was scheduled to be released September 15, but that was before Nimbus learned about Tillmann's racist history.

“We only found out some of these things in the past month when we started pitching this thing to media,” says managing editor Whitney Moran. “It’s in a place right now where it’s not, we can’t say it’s being published. We’re trying to figure out what to do.”

Tillman gained notoriety and a certain kind of celebrity after police arrested him in 2013 for stealing a hoard of historical .

The Fall River man had pilfered over 1,600 works of art, rare documents and antiques from around the province during his decades of crime, including a first edition copy of Charles Darwin’s On the Origin of Species stolen from Mount Saint Vincent University.

Stealing the Past covers those events along with other reflections from the author.

“In this candid memoir, Tillmann offers his unvarnished life story,” reads the promotional write-up. “Everything is on the table, from how he used methods like simple distraction through the use of decoys—once using his pet cat; usually his beautiful Russian wife, Katya. He describes their extensive dealings with the Russian mob (the Black Hand) and the tactics he used to once steal a van Gogh and a thousand-year-old gold Viking amulet.”

Aside from being one of the country's most infamous art thieves, Tillmann is also a self-proclaimed white supremacist who collected Nazi memorabilia.

A video tour of his Nova Scotia home—recorded back in 2011 and screened at his trial five years ago—shows various Nazi paraphernalia including a swastika flag hanging over the railing and a framed photo of Hitler.

In his accompanying narration, Tillman calls the photo “a picture of the great man—one of the greatest men in history. A decent man and he has a special spot in my office in my home.” 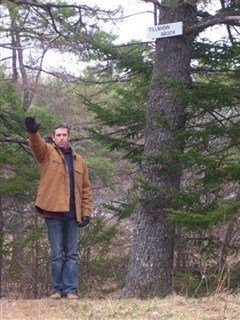 TROY MEDIA
Tillmann makes a Nazi salute next to the Tillmann Brook sign.
In the same video, Tillmann boasts of having renamed the nearby Tillmann Brook back in 1999, partially to flaunt his family's German heritage and intimidate a Jewish neighbour.

“There’s a Jew who lived in that cove there and he’s a doctor, so I think it’s kind of an appropriate name to go near him.”

Nimbus general manager Terrilee Bulger didn't have an answer when asked why the company was publishing a book by an admitted white but promised an official statement on the matter will be released in coming days.

“We are looking into this question,” says Bulger. “We’re meeting with his parole officer. We’re trying to get a sense of the whole situation.”

Tillmann pled guilty in 2013 and was sentenced to eight years in prison. At the time, defence lawyer Mark Bailey said his client was remorseful and wanted to “get on with his life.” But as written by Macleans in 2014, being locked away had little impact on Tillmann's ego.

“He says he detects admiration from fellow inmates, signs the occasional autograph and fancies a future with book and movie deals,” writes journalist Aaron Hutchins.

Nimbus' promotional material says that Stealing the Past was written by Tillmann while serving his sentence in prison.

“By writing his story himself, Tillmann exposes both his weaknesses and his strengths, making no attempt to hide his unorthodox way of thinking.”

Tillmann was granted conditional parole in 2016, despite being rated a “high” risk for future spousal assault and of violently reoffending within three years.

“In criminal profile, he was described as having opinions on feminism relevant to past and potential aggression—including an alleged attack on his mother in 2009,” writes CBC at the time.

In a parole board document obtained by CBC News, Tillmann is described by a former partner as a “white supremacist, anti-feminist and a police hater” who made “threatening behaviours” towards her.

As recently as two years ago, Tillmann proudly defended his racist politics to the media.

Moran says the company didn’t know any of these details when it signed its book contract with Tillmann last summer.

“He brought us a lot of materials, a lot of articles, and he must have just been strategic about which ones he brought us,” she says. “Obviously we didn’t do our due diligence. I’m willing to admit that.”

Bulger says Tillmann's book only focuses on his art thievery and does not contain any mention of his political beliefs.