UPDATED: False outrage over this past weekend's Marine Band protest

The only people who should apologize for the events at Grand Parade are the reporters who botched the story. 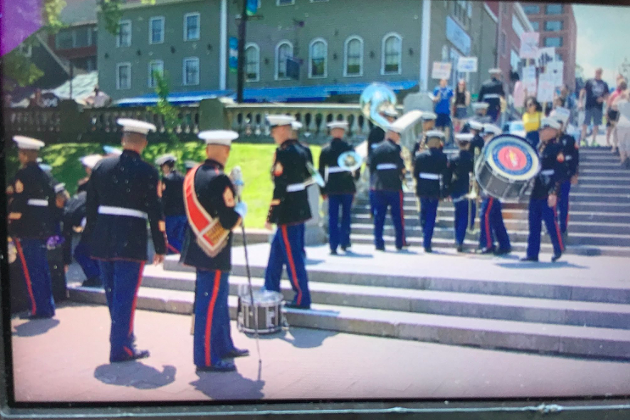 Update: Since this piece was published Shaw has deleted his tweets and web producer/social media manager Andrea Jerrett has apologized to Masuma Khan. Her emailed message is shared below with Khan's permission.

“While CTV Atlantic always strives to report accurate information, in this case, our reporter did issue a tweet with incorrect information,” Jerrett writes on behalf of the CTV newsroom and news director Dan Appleby. “He quickly corrected that information in a subsequent tweet. Unfortunately, some individuals or groups have chosen not to acknowledge that correction. No matter what, the original tweet did not meet our standards and we unequivocally regret the error in our content.”

This past weekend, the United States Marine Band walked into a political protest against the very government they represent.

It was largely uneventful and likely would have passed without much consideration except for a series of inaccurate tweets from CTV.

The marines were “going to play an outdoor show...but refugee issue protesters chased them away,” Shaw tweets.

This is not true, in several important aspects.

First and foremost, there was no outdoor concert planned. While the marines were in town for the Nova Scotia Tattoo, they were only at Grande Parade looking for a group photo. A cursory glance at the Tattoo’s official schedule shows there was no outdoor performance scheduled.

What was scheduled was the Activists in Halifax were joining together and speaking out on the same day as tens of thousands of other people across North America who are horrified and outraged by the Trump administration’s war on children.

Rebecca Faria’s tweets about the same incident paint a much calmer picture. After confirming the band wasn’t going to perform, she states that some protesters with signs stood next to the marines on the steps. A call-and-response chant about stolen Indigenous land was also led by Masuma Khan.

“And then the marines left,” writes Faria. “We laughed. We cheered. We went on with our afternoon.”

It’s worth noting that the marine corps' official policy says uniforms cannot be worn at any events that further political activity:

“Marines and sailors cannot wear their uniform when participating in public speeches, demonstrations, assemblies, interviews, picket lines, marches, rallies or any public demonstration which may imply service sanction for a cause that furthers personal or partisan views on political, social economic or religious issues.”

Meaning that the band probably couldn’t have stayed at the protest even if they wanted to.

Shaw has still not deleted his original tweets, but he did offer a separate, non-threaded “clarification” to confirm the band was never going to play.

“But,” the reporter took great pains to note, “that doesn’t change the issues or the emotions, whatever side people take on these issues.”

But it does change those issues and emotions entirely because the reality of events is so far from the inflammatory false version first presented.

The localized portion of an international protest against the inhuman abuse of children by the United States government is briefly interrupted by polite American military members who just as quickly leave.

Compare and contrast that against the story of screaming protesters disrespecting brave men in uniform who only wanted to share music with the city they’re visiting.

Nevertheless, the damage has been done.

Shaw’s original tweets continue to be shared—provoking outrage and scorn from easily offended local politicians and angry internet commenters. Those aggressive thugs band together in shaming the protesters while begging for civility towards military guests who are visiting Canada from a country currently committing gross and obscene crimes against humanity

It’s something of a minor miracle that the story hasn’t been picked up more by the right-wing media rebels who normally feast on this sort of inaccurate theatre.

Of course, that doesn’t mean Khan—the most visible person at the protest—hasn’t spent the last few days receiving personal threats for her role in the day's events.

“Since you hate Canada so much why not move to a Muslim majority country where [sic] not allowed to go outside without a make [sic] guardian?” Calgary electrician Chris Holowenczak writes to her on Facebook. “You can practice your evil ideology there. Or are you only here to bleed out [sic] welfare system dry like all the other muzrats?”

The truth of Saturday doesn't matter to people who've already made up their minds, but the framing of the story can do a lot to hold back or provoke more intolerance.

During these times of heightened irrational hatred, a special responsibility and care are needed to ensure accurate information gets out.

Otherwise, we cause very real harm to the people choosing to stand up for the safety of others.

What Canada can do to help the Hong Kong protesters

By Joshua Wong and other Hong Kongers

By Daniel Glick / The Story Group