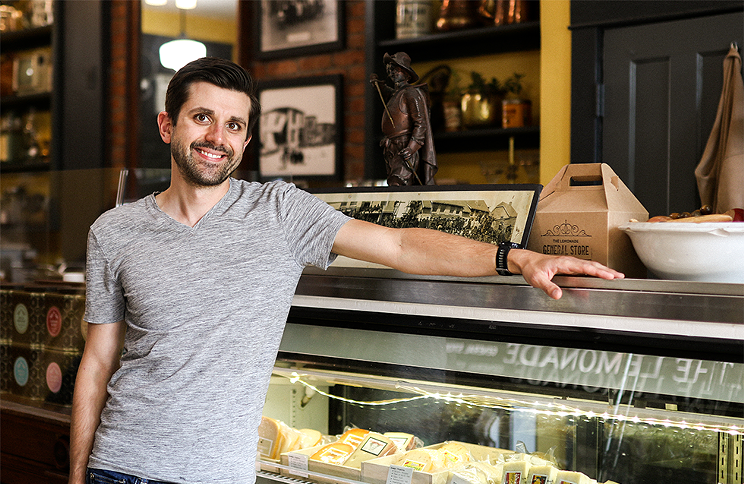 The Coast
One afternoon, Alex Piitz went into Lemonade General Store as a customer and ended up leaving as a consultant.

Cheese wasn’t always a big passion for Alex Piitz like it is today. Back in university, the Toronto native had been studying political history and never seriously considered a career in the food industry. But after graduating and trying to figure out his next steps, he stumbled into a full-time position at Toronto’s Olliffe Butcher Shop; it was a job meant to be a temporary stepping-stone to his next chapter.

But Piitz stayed at that butcher shop for six years. He fell in love with the industry, worked his way up to becoming the shop’s general manager and soaked up as much knowledge about food—including cheese—as possible until taking a brief break in 2018.

Booze you can use: The trio behind Bar Kismet starts REMY’S, a new wine, beer and spirits importer.

How we eat our food is just as important as the food itself: The way white folks eat is not the standard.

At that time, he began pursuing other interests. But in August 2020, he and his Nova Scotian wife moved to Halifax with their newly born son. Just a few months ago, Piitz was dropping his son off at daycare in the north end and decided to step into the Hydrostone Market’s Lemonade General Store (5525 Young Street).

That afternoon, he met Lemonade owner Sarah Arsenault, and he’s been helping shape the store’s food and cheese selection ever since. “The cheese counter, when I started here, was lovely and sold amazing things,” Piitz says. “But it was tending to be pre-cut and pre-packaged cheese, because (Arsenault) didn’t have the experience bringing in whole wheels of cheese and learning how to break them down and package them and stuff.”

It was an aspect of Arsenault’s business that she was hoping to grow, but as a mother of three and having just opened the store last November, she simply didn’t have enough time. She says Piitz had the knowledge base she was seeking to build that section of Lemonade; the duo is now focusing on importing a variety of European cheeses.

A better cheese counter doesn’t have to mean a snobbier cheese counter, however. “I find cheese shops, oftentimes, can be quite intimidating for people. And that’s what we’re trying to take away from this experience,” says Arsenault, whose goal with Lemonade is to create an accessible, welcoming store where everyone can easily ask for help.

“We’re just really interested in being a community shop for everyone to come into,” she says. “No matter what your knowledge base is on cheese, we want you to come in and feel super comfortable, and super comfortable to ask questions.”

Piitz claims that getting into cheese can be simple and cheap, so The Coast decided to put him to the test. We caught up with the cheese aficionado to get suggestions for cheeses to try, and affordable drinks to wash them down. Here are his eight picks and pairings.

1 Brie Lancelot Organic
This is a classic French brie, made from organic milk produced within a 40km radius of the fromagerie. Piitz says it’s soft and creamy while offering a mild nutty flavour, and it’s one of Lemonade’s most affordable cheeses. It’ll pair well with any sweet fruit or preserves, such as the Nova Scotian-made Tangled Garden jams. It also pairs well with a dry cider, such as a Bulwark Original, or a light-flavoured beer like Big Spruce’s Conniption Fit Ale.

2 Roquefort AOP Légende
The Roquefort is a traditional French blue cheese that’s a protected origin cheese, which means both the milk and cheese are produced in the same region to maintain quality and consistency. The creamy and crumbly cheese fits perfectly on a cheese board but thrives when it’s mixed into a sauce or crumbled on top of a salad. To highlight its bold and salty flavour, pair it with a sweet dessert wine such as Newman’s Celebrated Ruby Port from Portugal.

3 Manchego
People looking for a hard cheese can try this sheep’s milk cheese from Spain. Lemonade carries wheels that have been aged for at least one year. Despite being hard and slightly crumbly, Piitz says this cheese is very rich and creamy with salty notes. It pairs well with strong-flavoured food such as green apples or shaved over a salad dressed in a vinaigrette. It’ll also go great with a bold red wine such as a bottle of Grand Pre NS Red.

4 Oveja con Trufa
Similar in texture to the Manchego, this hard Spanish cheese contains a generous amount of summer black truffle, making it a must-have for truffle-lovers. “It is a striking looking and tasting cheese that is sure to impress,” Piitz says. It’ll sit perfectly on cheese boards with a simple cracker or sliced baguette. To drink, grab a bottle of a medium sweet red wine such as a Spanish rioja like Vina Santurnia Joven Tinto.

5 Saint Angel Triple Cream
Originating from southeast France, the Saint Angel Triple Cream is extremely soft and creamy. Add this one to a chees eboard or spread it on a slice of bread for a snack. Piitz says it has a luscious, semi-sweet flavour that finishes off salty. Try it with some sweet fresh berries and a dry sparkling wine such as the Petite Riviere Mimi from Nova Scotia’s South Shore.

6 Comté AOP
Anyone who likes versatility could be a fan of the Comté. Piitz says it’s a firm French cheese that’s smooth and nutty. Add it to a cheese board or watch it excellently melt in a pasta, casserole, egg dish or as a gratin. Pair the Comté with a robust red wine such as the Ontarian-made Jackson Triggs Cabernet Sauvignon.

7 Quicke’s Vintage Clothbound Cheddar
This British cheddar is wrapped in cloth and then aged for two years. Piitz says it offers “an incredible deep flavour that is earthy near the cloth-wrapped rind and becomes savoury with notes of caramel near the centre of the wheel.” Try a slice on top of a crisp cracker with a sweet jelly or chutney. Then, wash it down with some brown ale such as the Nova Scotian-made Breton Sons of Hector.

8 Lemonade’s curated boxes and boards
For people who aren’t quite ready to choose specific cheeses or create a unique cheese board, Lemonade creates Picnic in the Park boxes which are meant to be enjoyed right in the Hydrostone Park. These boxes cost $25 each and contain a curated selection of cheeses, crackers and bread. People can also call the store and order a customized cheese or charcuterie board starting at $50.