Back Around is the Halifax hip-hop group’s first album in 13 years. 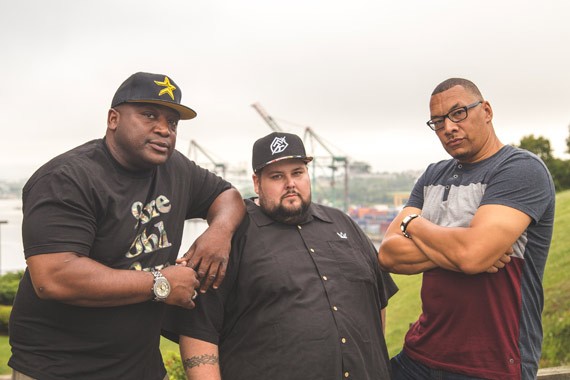 DYLAN CHEW
“I can’t wait to get out there,” says Tacktishion, at left, with DJ IV and F.I.Z. in Halifax.

On an evening in 2002, Tracey Williams (AKA Tacktishion) had his nap interrupted. His girlfriend woke him up, asking "Don't you have a show tonight?" Williams rushed down to Hell's Kitchen, now the Seahorse Tavern, on Gottingen Street, making it just in time to bust a rhyme with his group Universal Soul. He entered through the hyped crowd, jumping on stage perfectly in sync with his part in the rap. "It was just crazy," he says, laughing. "But I'll tell ya, I'd never missed a show."

Over a decade later, the guys from the Halifax hip-hop group, originally formed in 1992, will return to the same stage they performed on as teenagers and throughout their 20s. The desire to make music never left, says Finley Tolliver (AKA F.I.Z.), but life—kids, work, disagreements—slowed the process down. After the release of Time Capsule in 2003, the trio broke up. Original member David Adekayode (AKA Voodoo) moved to Switzerland, and Brian Pelrine (AKA DJ IV) arrived on the scene.

The group is launching its newest mixtape, Back Around, Thursday at The Seahorse. It's been a long time coming, and the group is amped. "We're known for our live shows—that's our bread and butter," says Williams. "I can't wait to get out there."

The show is a mashup of reunion and debut. Universal Soul will play songs from its new collection, and Adekayode plans to hit the stage to preform U Soul throwbacks with the group. A retired DJ tag team called Fore Plae, comprised of DJs IV and OK TK (AKA Plaeboi), will hype the crowd between shows.

The group has north end roots through and through. All of the members either grew up in the area, or have a strong familial connection to it. Launching this album on Gottingen Street means a lot to Universal Soul.

"For me it's kind of emotional, because it's really the full circle pattern," says Tolliver. "It's a sense of pride, a sense of belonging and a sense of contributing to the community again."

Back Around was an eight-year-long shared effort. The 17-track album features collaborations with Classified, Fresh Kils, Slowcoaster, Quake Matthews and Akil Zaakir from Jurassic 5. On the mixtape you'll find stories of relationships, the work week grind, struggles in the black community and Nova Scotian pride, but you won't hear any curse words.

"We don't talk about bull," says Williams. "In order for us to express what's truly on our minds, we don't need to."

It may have taken a while to get this album out, but with talk of another release in about six month, Universal Soul doesn't show any signs of stopping. "It doesn't matter how old you are," says Tolliver. "You're always relevant as long as you're doing it."