Cutout display in defence of John A. MacDonald in direct defiance of art exhibition’s anti-colonial theme. 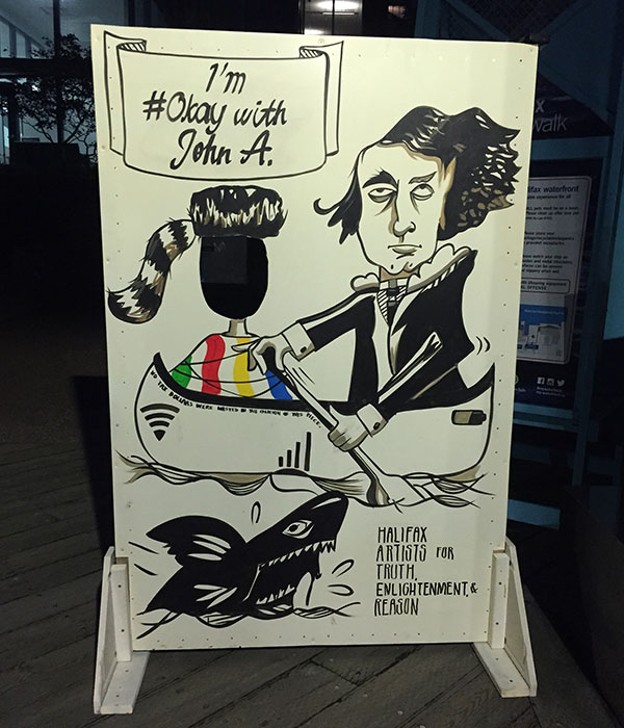 KING'S COLLEGE
The unaltered display as it originally appeared on the Halifax Waterfront.

An anonymous photo-booth cutout of John A. MacDonald was drilled down into the Halifax waterfront during Nocturne last Saturday night, standing for a brief period in opposition to the art festival’s anti-colonialism theme.

The cutout was a defence of John A. MacDonald and his relations with Indigenous peoples. It featured an “I’m OK with John A.” banner and depicted Canada’s first prime minister sitting in a canoe next to a photo-cutout hole of a person adorned with a Hudson’s Bay blanket and fur hat.

A caption on the canoe read, “No tax dollars were wasted in the creation of this piece.”

The cutout attributed itself to “Halifax Artists for Truth, Enlightenment and Reason.”

To our knowledge, this group does not exist in any official capacity. Nocturne officials also don’t know who put the board up.

In fact, the ‘art’ stands in opposition to Nocturne’s safer spaces statement. The organization aims to “host spaces that are widely accessible, amplify marginalized voices and leadership and actively prioritize anti-oppressive principles.”

According to Lindsay Ann Cory, Nocturne’s executive director, artists are endorsed by Nocturne through a series of applications. The process is to make sure that their art is approved by the city, has merit and adds to Nocturne’s theme.

This project did not go through any of Nocturne’s application submissions.

“Of course, political statements have always used art as a method of communicating a message. However, the statements raised with this pasteboard, and the act of putting it up without our permission, are not condoned by ” says Cory. [Disclaimer: Cory also serves as The Coast’s events person.]

This year, the Aboriginal Cultural Collective partnered with Nocturne for the festival’s 2018 theme, “Nomadic Reciprocity,” which directly addresses John A. MacDonald and other colonizers.

The theme encourages artists and observers to “unpack and reflect on our understandings of our history and the long-lasting impacts of colonization as well as our reciprocal dependence on the land that we stand on, benefit from and must protect for future generations.”

Later in the evening on Saturday, the cutout was tampered with and the phrases changed to be in opposition to John A. MacDonald. ‘I’m #okay with John A.’ was altered to ‘I am not #okay with John A,’ while ‘truth’ was crossed out and ‘hate’ was added, along with tears to MacDonald’s face.

At approximately , a Nocturne attendee who refused to give his name attempted to tear down this newly altered exhibit. He took issue with the vandalized version of the cutout, stating that the vandalization of John A. MacDonald’s face was ‘unpatriotic.’

“We can’t just walk by and watch someone bad-mouthing our culture,” he said.

Before the exhibit could be destroyed, bystander Scott Domenie stepped in to de-escalate the situation. Domenie strongly disagreed with the message of the original version, but he believed that ripping the exhibit down would not be a constructive response to it.

The legacy of Canada’s first prime minister has increasingly been reexamined for the cultural genocide he championed against First Nations, including the creation of the residential school system and a policy of starvation to force Indigenous peoples onto reserves.

Those efforts have been met with opposition from those in support of Canada’s founding colonial leaders. Groups such as the Proud Boys previously interrupted a planned Indigenous protest on Canada Day, and other residents have voiced their opposition to city hall’s removal of the Edward Cornwallis statue this past January.