Brow-raising: Lowbrow art is explored in the film New Brow, showing as part of an event at the Khyber. 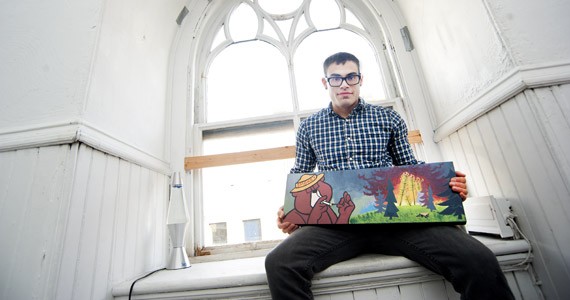 Angela Gzowski
Jono Doiron and “lowbrow” art at the Khyber.

New Brow is a 2009 documentary feature film that examines the rise of contemporary underground art or lowbrow art. The phrase, lowbrow art, was coined by underground artist and Juxtapoz magazine founder Robert Williams, and refers to the underground populist art scene that grew out of Los Angeles in the 1970s. With roots in punk rock, graffiti, hot-rodding and underground comics, lowbrow has a broad nostalgic appeal, especially for those who haven't quite escaped their youth.

Local artist Jono Doiron is one of those who haven't quite left childhood behind. "I always responded to comics and cartoons for whatever reason," he says, "and I just never grew out of them." He finds the handle "lowbrow" a bit problematic. "The term lowbrow is a little insulting, it doesn't do the art justice at all. A lot of the artists who fit into this genre, they're not only people who can paint, but they're people who can draw and draw remarkably well.

"Some artists accept it, some artists resent the term, but you know lowbrow art when you see it. For me personally, there seems to be a consistent sense of humour that I really enjoy with the art, it doesn't take itself too seriously."

Doiron sees lowbrow art as a bridge between underground culture and art and fine art, describing his own art as being made for people who don't normally find themselves in a gallery: "If they see [my work] when they come to a gallery show all of a sudden they feel like they have permission, 'Oh I'm allowed to be here and I'm allowed to like art and I'm allowed to understand it.' Lowbrow art doesn't insult you if you don't understand it and don't get the message."

It's this feeling of permission that Doiron hopes to bring to audiences at the Halifax screening of New Brow, the first Canadian showing of the film. "I want to expose people to a whole genre of art that they might not otherwise be exposed to," says Doiron, who is also curating a complementary show featuring work by Ed Beals, Kyle Bridgett, Justin Lee, Mark MacAulay, Colleen MacIsaac and Janette Rawding.

The public screening at the Khyber was borne out of Doiron's frustration at not being able to see the film. "I'd watched the trailer 60 times and I just wanted to learn more about it." After missing a chance to get the film into the Atlantic Film Festival, Doiron hoped to buy it online, but due to lack of distribution, it wasn't released. Doiron reached out to the film's director, Tanem Davidson, and asked to set up a screening in Halifax.

"I think a lot of people will enjoy it and be surprised by it. It's a very thorough film," says Doiron. "One of the gallery owners in the film brings up a great point. It's the clientele that chooses what art movements come and stay. It's not the artists. It's not the galleries. If no one is buying something, they're not going to make it."

Doiron hopes people buoyed by seeing what they grew up with---comics, cartoons, toys---represented in a new light in lowbrow art works will embrace art in a new way. "I am hoping this film will expand people's understanding of what art has the potential to be and that many will be inspired to create art of their own."