Fellowship of the ring: You may go to see wrestling in Spryfield to scoff, but you’ll remain to cheer. 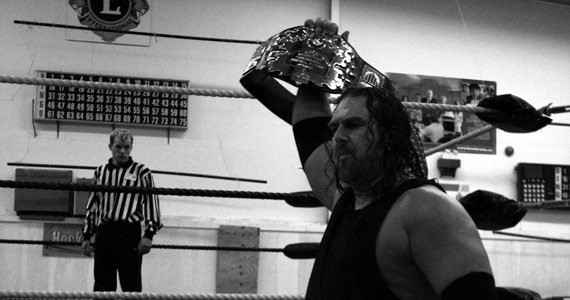 Off the beaten path of Spryfield's main drag, down a quiet suburban street, both prizefighters and plebes gather under the blaze of fluorescent lights in the Lion's Club to throw their weight around in the ring and throw delighted scorn from the sidelines.

The Lion's gymnasium is the regular stomping grounds for a loose band of outsiders and former stars in the Ultimate Championship Wrestling, an outfit founded by local luchadore impresario Chuck Martin in 2008.

While waiting in line, a couple of women are chatting about the recent bad press the ragtag bunch received about a show they held at Empire Theatres in Bayers Lake. Moviegoers who happened to catch the spectacle criticized one wrestlers' gimmick for making light of mental illness.

The tussler in question goes by the stage name "Randy Relapse," a chap who tightly grips a teddy bear close to his chest and spins a yarn of having just escaped from the Nova Scotia Hospital.

"Either you understand it or you don't," says the patron-of-the-arts in line. "I don't know why you'd want to come by just to criticize it, if you don't like the show then leave. I've known Chuck for 20 years. He's a good guy."

An embarrassed Empire Theatres has since dropped an ongoing arrangement they had with UCW to warm up crowds before pay-per-view screenings of WWE events, while an unapologetic Martin said they wouldn't stop booking Randy Relapse for shows, simply because he's a fan favourite.

To these wrestlemaniacs, Martin is a folk hero.

Inside, the regulars chat about the marquee event, a highly-anticipated rematch between title-holder "Wildman" Gary Williams and JP Simms, the ladies' clear favourite.

Wildman took a chair to Simms' knee in a match-winning blow during UCW's fourth anniversary show, sparking a grudge between the once-friendly heels. This time around, Simms is seeking his revenge with a no-holds-barred fight.

It's a rather scrappy set-up. An unadorned plywood ring, metal folding chairs (at the ready) and makeshift curtains between us and the players. Not exactly the kind of theatrics one might expect, but a wildly charming return to the vaudeville sideshow roots of wrestling.

The pageantry begins with a 10-bell salute to the late "Macho Man" Randy Savage. Before being asked to stand, most of the crowd is already at attention observing the tolling of the bell in his honour, a traditional send-off of a veteran legend of wrestling.

The moralistic drama of good vs. evil---or babyfaces vs. heels---isn't overtly set up with scripted storylines. However, it doesn't seem like this audience needs any introductions. They're already hip to the story. It's as closely followed as a soap opera for these UCW groupies.

Bushwhacker Luke is the guest star du jour, half of a burly WWF-era duo, who got his start in the 1970s tag teaming for Stu Hart's Stampede Wrestling in Alberta. The Bushwhacker comes trudging out from the dressing room to the tune of country-bumpkin music with his trademark swinging-arms and slobbering-kisses.

Much like the golden-age of pro wrestling the machismo is as much tongue-in-cheek as the sport itself.

In the ring, the Bushwhacker wastes no time before yanking down the pants of his opponent and taking a couple vicious chomps on his lily-white behind.

The women in the crowd don't seem like the types who were frog-marched down to the bout by partners. In fact, some of them are firing off the most blood-lustful jeers.

One brassy middle-aged woman taunts the wrestlers more than anyone else. "C'mon! Do something! We're falling asleep here!" she razzes.

Their el-supremo villain, The Maritime Menace, tossed his waspish opponent from the ring into three white-haired, cane-toting ladies who didn't recoil, but rather pushed him to the floor with a chorus of laughter.

Despite the small-time affair that is UCW, their commitment to the dramaturgy of wrestling is strong. Some jean-jacketed folks are discussing how Trash Canyon and Wildman Williams---once sworn enemies in the ring---didn't want to be seen with each other in public to keep up the illusion of their rivalry, despite a real-life friendship offstage.

In the industry this is part of the "kayfabe"---faking it to maintain the suspension of disbelief.

But somewhere along the line, in the twists and turns of the tale, the two are now back on side and can walk down the street together without fearing they may crush the illusions of some young'un.

Wildman Williams retains his title after sneaking a mitt-full of sand out of his pocket and tossing it into Simms' eyes, a move that doesn't resonate with the hissing crowd.

From bell to bell, it is three hours of the most bizarre entertainment going.