Coming to town for Halifax Pride with their new album *Future Souls*, Uh Huh Her bring an evolved sound and an answer to your existential questions. 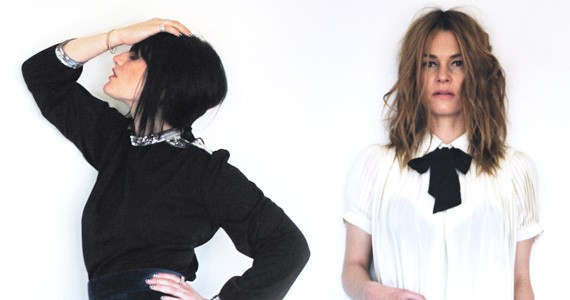 In 2008, Los Angeles-based Uh Huh Her's Camila Grey and Leisha Hailey had just released their debut EP, I See Red (2007), had only played two dozens shows together and giggled into the phone like new found best friends. Grey had just finished up with her previous band Mellowdrone, and Hailey was best known as Alice Pieszecki from the hit HBO series The L Word.

Six years later, the band was signed and dropped by major label Nettwerk in 2009, relentlessly toured internationally as independent artists, fell in love with one another and released several albums, including their latest stellar full length, Future Souls.

"It's a strange world as far as the music industry is involved. There's not too much of a grey area," says Grey, taking a break from Uh Huh Her's home studio, Deep Valley Sound. "If you're not Lady Gaga, we're all just flailing with the Internet and social media. Being able to sustain the project for five years post label has been amazing. It's really hard."

Named after PJ Harvey's sixth studio album, Uh Huh Her, released in 2004, Grey confessed to hating the band's name. The decision came out of sheer necessity; Nettwerk pressured them to have a name, as they released I See Red with merely a day's notice. Grey admits it reads better than it sounds---"I don't know what we were thinking. I'm a very visual person."

Before Uh Huh Her, Hailey's bands The Murmurs and Gush kept her busy on background vocals and bass and Grey hadn't released any solo material---though she sang, played guitar and keys for low-fi band Mellowdrone. Grey also held down a few gigs as a session musician with Dr. Dre, Melissa Auf Der Maur, Busta Rhymes, Kelly Osborne and went on a world tour as Adam Lambert's keyboardist.

Uh Huh Her's latest release, Future Souls is an artful electro-pop infused album of existentialism and sensuality. Both Hailey and Grey took on role of producer, and found they took a more organic approach to recording. "We ended up getting a house together, I always wanted to have one room---a man cave, a woman cave, whatever you call it---so I could be creative in it," says Grey. "I'm more technical in terms of producing. We worked in a very leisurely, slow and whimsical way. Normally we're under stressful circumstances under large amounts of money."

"It was so fun. I would go take a swim, and come back, write another verse. Kind of my best case scenario."

Future Souls touches on Grey's ongoing sense of existentialism, and philosophical questions---Why are we here? What the hell is going on? Where are we going? What is the future of humanity?

"These come up for me daily. Leisha probably wants to kill me at this point," she says. "I am constantly searching. I grew up in a rigid Christian environment in Texas, I got here by loving science and reading a lot. Some call it enlightening, others call it anxiety. I like to say I'm somewhere in between."

Certainly, living in LA takes its toll. Grey has called the city home for the past five years, and believes it has its pros and cons.

Last time Uh Huh Her toured through western Canada, making stops in Vancouver and Calgary, she was blown away by the mountains, open skies, and kindness of the people. Uh Huh Her's Halifax Pride appearance July 26 will be their first time in town.

Fresh off the heels of St. Vincent's life-affirming live show earlier in the month for Halifax Jazz Festival, they promise to inspire danceable, hypnotic beats and deliver an electric show, performing most of Future Souls, and a few classics.

"I went to college with Annie [St. Vincent]. She used to slap her acoustic guitar in my apartment," says Grey. "She's an incredible percussionist with a guitar, and uses it as a percussion instrument. She's done amazing stuff, and deserves all this recognition."

While Uh Huh Her continues to create electro-pop music, they dabbled in '70s rock, jazz and dance music, only to return to their original vision. Grey describes their sound as "sedated dance rock." Even back in 2008, Hailey and Grey had a noticeable chemistry. Their dynamic spilled over from bandmates to lovers, and queer fans reveled.

"At this point for us it's being a voice of a subculture and being who we are. Not being ashamed," Grey says. "It's about standing up for what we believe in as far as rights are concerned. It's weird to be a poster child for anything.

"We're being who we are, and I'm so thankful it actually helps people. You never know you're helping people. I'm just a stupid musician in a band."