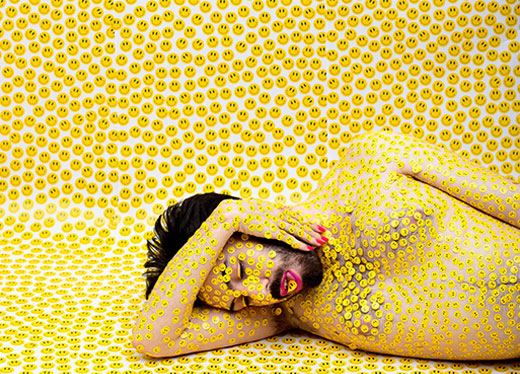 Séamus Gallagher and Ursula Handleigh made the 24-artist long list

submitted
Back in 2019, we ran this work by Séamus Gallagher—called “all smiles”—as the cover for an issue celebrating the mini-wave of personal-and-political art being made in Halifax.

Back in 2019–when our collective existential crises mightn’t have been new, but were certainly fresher than they are now–seeing a Séamus Gallagheroriginal in my Instagram feed was the sort of jolt to stop me mid-scroll, to make me sit up and actually look at what I was seeing. The 2018 Starfish Award winner and 2019 1st Art! Competition winner makes photographs that feel like a candy shop issuing pop-art-y reminders about the climate crisis. They’re emblazoned with the sort of slogans you’d set your MSN messenger status as; A cracking smile and sweaty brow acknowledging that Everything Is A Lot Right Now. (Case in point? The 2019 Gallagher work “all smiles”, a perfectly made-up corpse covered in smiley face stickers which we put on the cover of The Coast that year.)

Now, Gallagher’s work is doing what it does best yet again, making the folks behind one of the country’s biggest photo prizes–the New Generation Photography Award–sit up, take note and maybe even set their “away” status to a photo title of Gallagher’s. The Halifax shutterbug was nominated this week for the prestigious honour and is in the running for its $10,000 purse.

But Gallagher isn’t the only Halifax-based artist making the New Generation long list. Another of the 24 nominations was given to the camera-less photographer Ursula Handleigh. While Handleigh’s style seems more black-and-white-based to Gallagher’s neon–and more ethereal, with a ripped-from-real-life bite–both artists remind us that, even in a visually oversaturated culture, there are some pictures that always had more than a thousand words to tell us.

The final three New Generation Photography Award winners will be announced on March 23.