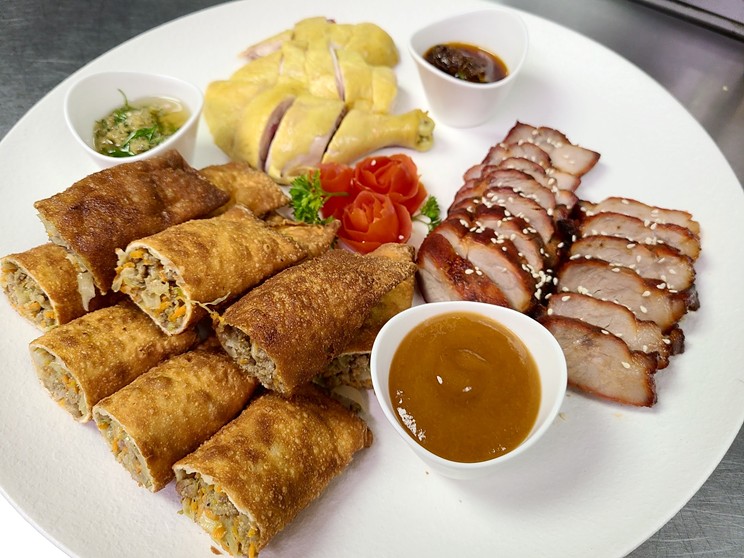 Submitted
A plate at The Orient that’s similar to what diners will be creating for their appetizer in this take-home kit.

It’s been seven years since Ivan Chan first started offering a Chinese New Year feast at his lauded restaurant The Orient. Since first opening at 227 Bedford Highway in 2015, the traditional Chinese eatery’s annual dinner for the Lunar New Year has been highly acclaimed in Halifax. And while COVID-19 has threatened numerous businesses over the past two years, Chan isn’t ready to leave his customers disappointed.

This year, The Orient is offering a take-home food kit that includes ingredients to create a four-course Chinese dinner with high-end eats like ginger halibut soup with abalone and Cantonese-style lamb salad rolls. To celebrate the Year of the Tiger, The Orient will offer a live virtual cooking lesson fully-led by chef-owner Chan on Jan. 31.

“It’s my father,” Chan, who was born and raised in Hong Kong, says. “I’m not going to risk his health for any kind of money. I pretty much tell people, ‘We’re not going to give up. We’re still going to do it, we just have to find a way to execute it.’”

In the past, The Orient has seen huge success with its annual New Year dinner. Since the restaurant could only seat 60 people without COVID-19 restrictions, tickets often sold out weeks in advance in previous years. Chan says the last time he started selling tickets for the Chinese New Year dinner, it sold out in under 24 hours.

Chan remembers one year where there was so much interest—and disappointment from people who couldn’t book a table—that he had to add a third night to the Chinese New Year dinner. He also recalls one customer who called him and explained that they’ve been trying to book a table for this event for three years.

That success and response from customers motivated Chan to continue his tradition of offering a special dinner on Chinese New Year in the face of the pandemic—even if it means serving people virtually.

This year’s food kit starts off with a sweet and savoury plate of appetizers. On this first plate, diners will prepare a Cantonese-style lamb salad roll and a signature Chinese-style barbecue rib covered in an orange honey vinaigrette with a side of Chan’s popular white miso tzatziki.

For the second course, diners will make a ginger and scallion soup made with halibut broth. Local halibut cheeks and abalone braised in Cantonese oyster sauce will be thrown into the bowl.

Then, diners will create their main dish—which is one Chan himself actually prepares in cooking competitions. At the base of the plate, there will be a thin golden tofu pocket—similar to a dumpling—that’s filled with fried rice. On top of the base, there will be a lobster tail covered in spicy Chinese sichuan dan dan sauce. Sweet and sour golden kimchi as well as sichuan pickled cucumbers will grace the sides of the finished, show-stopping entree.

From Hangzhou to Halifax: A celebration of our favourite authentic Canadian cuisine

To cap off the night, dessert will consist of Chinese deep-fried milk that’s wrapped in a crispy, golden skin. On top, it will be covered with a sweet black sesame sauce, candied sunflower seeds and edible flowers.

On the morning of Jan. 31, Chan will prepare the food for each kit to ensure it’s fresh. Then, people who have pre-ordered a kit (orders can be made on The Orient’s website before midnight on Jan. 28) can pick them up at the restaurant on Monday afternoon and prepare for the virtual lesson, which begins at 6pm.

During the virtual class, Chan plans to explain the reason the dishes were designed and why they’re being eaten on Chinese New Year.

For instance, he wanted to ensure the main dish’s focus includes a foundation of rice, a staple in Chinese cuisine. But he also wanted to include locally-sourced high-end seafood—in this case lobster—to attest to Nova Scotia’s local flavours.

Still, Chan’s main goal is to keep the spirit of his tradition alive and share his passion for Chinese cuisine with food lovers who are just as passionate to learn.

“We try to keep it as best as we can; COVID is not going to stop us,” Chan says. “But we all have our own priorities. For me, right now, it’s my family’s safety and that’s why we took this route.”