Rankin says daycare will cost around $10 per day by 2026, but critics want to see help sooner.

While a provincial election call seems just around the corner, premier Iain Rankin, joined virtually by prime minister Justin Trudeau, announced a $905 million deal for child care that will cut average costs to $10 a day over five years.

“This is a game-changer for Nova Scotia families,” Rankin said during a press conference at Mount St. Vincent University. “I’ve been making a lot of recent (funding) announcements, as many in the media remind me, but it’s hard to beat this one today.” 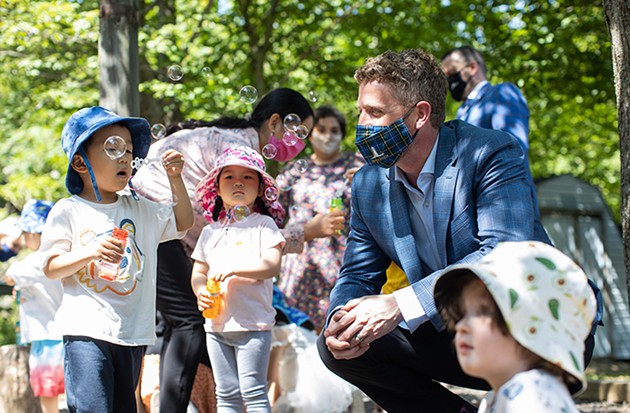 By the end of 2022, daycare costs are expected to be cut in half; by April 2025, there will be 9,500 additional spots for kids. The program also promises eventual wage hikes for early childhood educators (ECEs).

Women scramble to find childcare in lockdown—again: Whether it means work from home or paying out-of-pocket, caregivers are stressed.

The massive funding announcement is welcome news to many—given the rising costs of care and impact of COVID-19 on daycares, which caused some centres to shutter over the past year. But the provincial NDP’s education and early childhood development critic Claudia Chender said today’s announcement comes far too late to help those who most need support.

“We’re in a pretty huge bind as far as childcare goes in Nova Scotia,” Chender said in an interview Tuesday afternoon. “We don’t have enough ECEs, we have a massive wage disparity between the public sector and the not-for-profits.”

The province says it will address workforce issues among ECEs by providing one-time $500 grants for ECEs who work in NS-funded daycares, and by 2022 it will develop a compensation framework for early childhood educators in order to improve pay and benefits.

“What we heard today attempts to address those issues, but with way too long of a timeline—and on the eve of an election,” Chender said.

PC education critic Tim Halman said in an email the timing of the announcement, “with an election on the horizon, should leave a lot of parents skeptical about the government’s intentions.”

Trudeau’s federal government pledged $30 billion for a national child care program in the spring budget, which requires provinces to work with the national government to enact a program. So far only British Columbia and Nova Scotia have announced plans for affordable daycare.

“A Canada-wide early learning and child care system has been talked about for decades, and I'm proud that our province is at the forefront of making this a reality for Nova Scotian families,” Rankin said.

Childcare and the “she-cession”

Through the pandemic, low-earning Canadian women were most affected by job loss. A March report found that employment among women was 5.3 percent lower than it was in Feb. 2020 before the pandemic hit. The job drop for men over the same period was 3.7 percent. Employment for low-earning women dropped 14 percent over this time, compared to 12 percent for low-earning men.

Trudeau said the daycare program recognizes we’re in a “she-cession” and that “women were hit harder than many other people during this pandemic, and we need to step up,” he said via livestream.

“It’s the right thing to do… as a feminist government, there needs to be a feminist recovery. Child care is at the centre of that.”