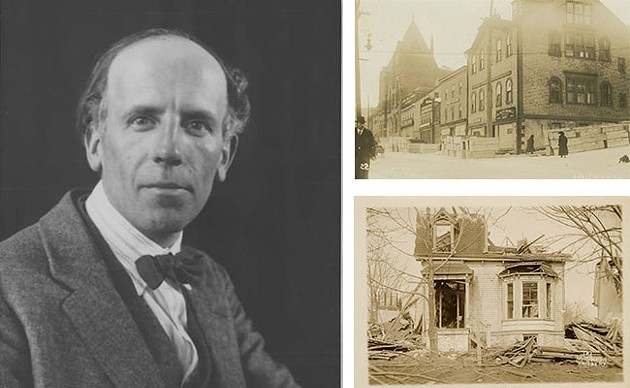 M.O. Hammond from the Archives of Ontario, W.G. MacLaughlan from the Nova Scotia Archives
The December 6, 1917 walk from Bedford to downtown exposed Lismer to scenes of the Explosion’s aftermath, and the art school where he worked (top right) was used as a morgue.
Arthur Lismer and the 1917 Explosion:
When War Came to Halifax
November 23–December 17
Dalhousie Art Gallery, 6101 University Avenue

If it happened today, producers would be bidding for the film rights by noon.

Instead, the Explosion in Halifax Harbour—the worst human-made disaster prior to the atomic bomb—was documented in a 75-cent paperback filled with 60 photographs.

Heart Throbs of The Halifax Horror was written by Saint John news reporter Stanley K. Smith, who landed in this city on December 8, 1917, two days after the tragedy. A printing of Smith's book and a rare hardcover edition featuring 11 illustrations by Arthur Lismer are now on view in an exhibit at the Dalhousie Art Gallery.

The lurid orange cover of Heart Throbs features a sketch by Lismer, who later became a member of Canada's famed Group of Seven. The compelling pen-and-ink drawing shows a couple with a child gazing sorrowfully over the debris field.

A later, short-lived second edition of Smith's book entitled The Drama of A City: The Story of Stricken Halifax includes 11 other drawings Lismer sketched in the hours and days following the Explosion.

People with eyes covered by bandages comfort one another in a hellish landscape of fallen homes and smouldering fires. Charcoal sketches depict others loading bodies during a blizzard or standing wearily in line-ups for food.

Lismer, originally from England, was principal of the Victoria School of Art and Design. The school, later renamed the Nova Scotia College of Art and Design, sat on the current site of the Five Fishermen restaurant. On the day of the Explosion, Lismer's family was finishing breakfast at their Cliff Street home overlooking the Bedford Basin. The house was suddenly shaken by a pressure wave triggered by the collision with the Mont Blanc munitions ship. Lismer sent his wife and daughter outside for safety. There the family saw a miles-high cloud emerge over the north end. The artist then set off on an extraordinary walk to work.

Because the train had been halted at Rockingham Station, Lismer spent many horrific hours struggling towards his office, stopping to sketch scenes of the Explosion's aftermath. Those rarely seen black-and-white images—reproduced and enlarged for the Dalhousie exhibit—are stark and sympathetic portraits of bewildered, grieving citizens.

The exhibit also includes Lismer drawings published by the Canadian Courier in its Saturday, December 29, 1917 issue. Here's the opening overheated prose of "When War Came to Halifax As Seen By A Canadian Artist":

Never in the world of science, so far as we know, was there such a force let loose all in a few moments as the Anarchy that wrecked Halifax. Never was a city so suddenly wrecked. No earthquake ever came with the awful, unpremeditated swiftness of the explosion of 4,000 tons of TNT. One blow from a cataclysmal fist shattered a city as a giant's hand crumples a toy village of cardboard.

Lismer became a designated wartime artist in 1918 and eventually moved to Toronto. His original sketches of the Explosion have never been found.

Alan Ruffman, a geologist, local historian and self-confessed "Explosion nerd" since reading Hugh MacLennan's Barometer Rising as a teen, generously agreed to make his copy of Heart Throbs available for Dal's exhibit. Ruffman not only has one of two known copies of the orange-covered paperback, but he also owns the rare second edition of Smith's book that includes those 11 rough sketches of human tragedy.

Drama of a City "is word-for-word the same text," says Ruffman. "The publisher, Gerald Weir, took the 60 photos out and put in the 11 drawings."

A chance encounter in 1977 with then-Dalhousie art curator Gemey Kelly (an acknowledged expert on Lismer's Halifax period) at a New Year's levee at Schooner Books tipped Ruffman to the significance of Lismer's drawings. He eventually got his hands on one copy of The Drama Of A City that turned out to contain the 11 previously unknown Lismer sketches.

Those sketches are part of the written reflections and art about the devastating, transformative event that are surfacing in preparation for the Explosion's centenary. Lismer's connection to the event continues to reverberate with Barbara Lounder; a visual artist who teaches at NSCAD. Over the past decade she's become fascinated with walking as a method to stimulate creativity, and is a founding member of the Narratives in Space + Time Society. The group has created a series of public walking events that mash-up performance art, research and storytelling to connect the present to the past.

In 2013, Lounder led a public walk retracing Lismer's footsteps after the Explosion. The tour grew out of a solo journey she took four years prior.

"I walked from where Lismer lived at the top of Bedford Basin to the Sexton campus of the engineering school at Dal," recalls Lounder. "It was a reminder that December 6 is about the Halifax Explosion but it's also about the Montreal Massacre. And it's about violence in general and why these things happen. I wanted to experience that as an artist. I was very moved by the fact Lismer did this work and was a witness to the catastrophe of that day. I wanted to embody that by walking the same path."

The collision of violence and art is foundational to the Halifax Explosion. Immediately following the blast in 1917, the Art College where Lismer was principal became a temporary storage space for coffins from Snows, the funeral home next door. An exhibition borrowed from the National Gallery had just opened in the gallery above the school and sustained serious damage. In a letter to the head of the gallery, dated December 14, Lismer asked if he could use some of the precious, unbroken glass from the lithographs to patch windows to keep out the snow.

"Now all these are small things compared with the awful damage and death toll in the devastated area, that is indeed a woeful sight—and our 20,000 homeless (we are all caring for them) and the numerous blinded people—and the little children—a sight of any of these would depress the tenderest soul...My school is full of coffins now and all boarded up."

The Lismer drawings of the Halifax Explosion will be on display at the Dalhousie Art Gallery until December 17.

Jennifer Henderson is a freelance reporter living in Dartmouth.

Correction: The original version of this story stated that the Victoria School was used as a temporary morgue, but Alan Ruffman assures us it was only used to store coffins—not bodies—from the funeral home next door. The story was changed Dec 20, 2017, to reflect this.