Trapped inside a Bone Cage

Taylor Olson's debut feature tells the story of a man struggling within the confines of toxic masculinity. 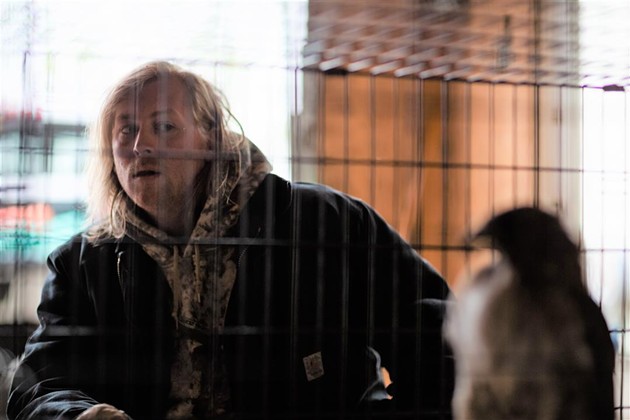 Jamie works operating a wood processor, clear-cutting for pulp. Jamie knows what it feels like to be killing the place you want to live in. Jamie worries what he’ll do for work once the last tree falls. Jamie wonders what he’ll do at all once the last tree falls. Jamie ends each shift searching for wounded animals in the wreckage, rescuing those he can.

Will he be able to rescue himself from the wreckage, too?

“Jamie always fascinated me. I feel like I knew him because I knew people like him. But he’s kind of two things at once: He’s what people might call a hard case—he’s got this really tough exterior. But, the reason he has this tough exterior, is because deep down, he’s quite sensitive and caring and empathetic,” says Taylor Olson, director and star of Bone Cage, (yes, the film adaptation of Catherine Banks’s play of the same name) about its lead character, Jamie.

It fits that Olson’s full-length directorial debut—and his biggest role to date—would be based on Bank’s landmark, Governor General’s Award-winning play. After all, he played Jamie in the show’s 10th anniversary remount at The Bus Stop Theatre in 2017, which Coast theatre critic Michael Lake said was full of “powerful performances [that] take the poetry of despair and make it sing.”

“When we did the play, she was happy with my Jamie—I think that’s why she let me do a movie version,” Olson recalls, speaking by phone. His Jamie, then, “comes from a variety of different people that I’ve observed in my life, growing up in small rural towns.”

“It was a couple days into rehearsal, I just had this feeling it would make a great film because one: Catherine is one of my favourite Canadian playwrights and her writing is poetic and beautiful and I knew the poetry of her writing could translate visually,” Olson adds. “But also, I knew from my family’s history with the forestry industry that the images would be really striking and I had never really seen…the devastation of a clear-cut on a fictional film.”

While the film—which is getting its debut as part of the all-online FIN Atlantic International Film Festival this week—pares down the number of storylines present in the play, it otherwise stays a close cousin to its source material. (The day of this phone interview, Olson is feeling relieved because, the night prior, Banks finally saw the flick and “She was really pleased with the film and we had some nice discussions about the difference between the play and the film, which was a ‘whew! she doesn’t hate me’ moment.” This feels almost a bigger blessing than the film having won its funding through Telefilm's annual Talent to Watch program—of which past winners include Ashley McKenzie's Werewolf and Cory Bowles' Black Cop.)

“He puts on this protective armour to protect himself and he has this sort of masculinity—this performative masculinity—he has to take on, and then that becomes a part of him. It’s because of the environment he lives in and how he’s surviving in it,” Olson adds, by way of explaining Jamie’s motivations in the movie. “And it’s true a lot of the time that if you don’t necessarily fit into the box that a patriarchal society expects you to be in; and how you perform and act; and how you take that on and then you teach other people to take it on, too. And then that armour just gets thicker all the time.”

This narrative—of what it takes to be a good man in a world full of toxic ones—is a through line present in many of Olson’s works, from the 2016 short Hustle & Heart (where Olson plays a quarterback who falls for a fellow teammate) to 2019’s Masc (a short film written, directed and starring Olson that follows a young man’s attempt to compensate for his insecurities).

“My partner Koumbie said to me when we first met, when we were working together, ‘What’s your shit? What’s your thing you’re trying to work out?’” Olson adds. “I think for me it’s this sort of ‘how do men become corrupted by masculinity and how do you be a good, healthy man that doesn’t do these sorts of things?”