Why we should all be concerned about the city's attack on the transit union. 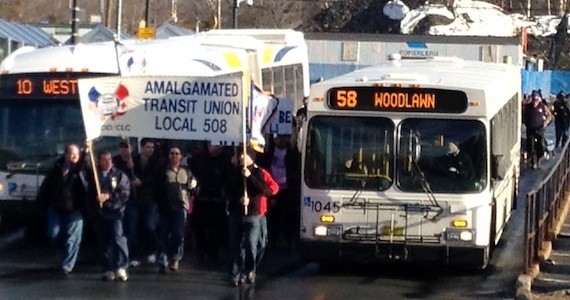 Wages are not an issue in the contract negotiations. The city has offered a 0.5 percent wage increase for this year---for a conventional bus driver, that's a raise of just 12 cents an hour from the existing $24/hour to $24.12/hour. That pay rate would apply to all drivers, no matter how long they've worked for the company; a 30-year veteran makes the same as someone who's been driving for one year.

A similar wage increase of 0.5% has been offered for all transit workers, including ferry operators, Access-A-Bus drivers and mechanics. The city's offer for the second year of the contract is an across-the-board pay increase of 3.5 percent.

The city's offer is for just a two-year contract, retroactive to the expiration of the last contract in September; past contracts have typically been for four years, and once for six years. That means if the union agrees to it, as soon as the ink is dry on the contract, the two sides will start negotiating for the next contract.

Still the union is willing to accept the poor wage offer. “What is the point of striking over wages in 2012?" asks union president Ken Wilson. " I know the economy’s bad. The state of the economy---everyone’s going through a downturn---we understand that.”

Rather, the union is rejecting three other demands from the city, which roll back existing agreements, some of which have been in place for 40 years. The major sticking points are: