We must ensure that trans women, particularly BIPOC trans women, have a voice at the forefront of conversations about violence and sexual assault. 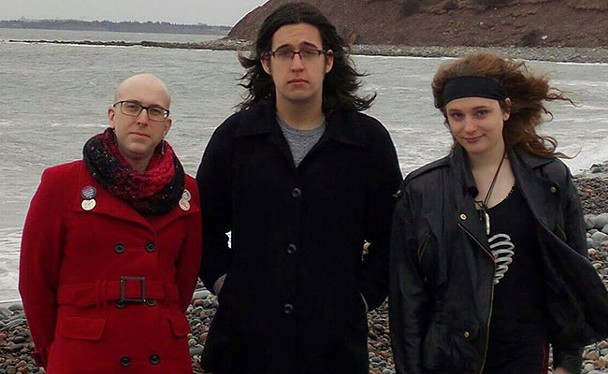 Halifax Trans Fem/Enby Resistance Collective
The Halifax Trans Fem/Enby Resistance Collective formed in the wake of recent trans exclusionist attacks. Áine Morse, Hope Salmonson and Jessica R. Durling are organizers of the Collective.
Over the past two weeks, Halifax transgender women have been experiencing intense and persistent harassment from local trans exclusionists. Readers should note that this piece will discuss acts of transphobia and transmisogyny (discrimination targeting trans feminine individuals) in detail.

A , otherwise known as a transgender exclusionary radical feminist (or “TERF”) excludes transgender people—particularly trans women, trans femmes, and non-binary people—from public life. They depict trans women as dangerous men and sexual predators. Visible and vocal trans women are targeted by trans exclusionists with online harassment, physical threats and by exposing their personal information on the internet. Exposing personal information, known as , can lead to assault and attempts to get trans people fired from their jobs. This violence has become increasingly prevalent in Halifax in the weeks since judge Gregory Lenehan’s sexual assault decision on March 1.

Protests were hastily in the wake of Lenehan’s acquittal of taxi driver Bassam Al-Rawi. Trans women were among those to raise concern that the protests were failing to centre Black, Indigenous and people of colour () and queer, trans and two-spirit community members. The trans women speaking out were faced with a barrage of harassment by trans exclusionists. Continuously, trans women were painted as abusive men attempting to invade genuine women’s space. In the days since the protests, local trans women have been threatened with physical assault by fellow Haligonians and targeted with unfounded rape allegations for expressing same gender attraction.

These attacks are common tactics of trans exclusionists. Activists and must be proactive in ensuring violence is prevented and confronted. Events and are not safe for trans women, trans femmes and non-binary people unless explicit safeguards are in place. Allowing for and enabling trans exclusionary violence sends a clear message to trans women: You do not belong.

More broadly, activists must confront the wide-reaching impacts of transmisogyny. Communities must find ways to confront the ways that trans femmes are . Prominent feminists like Chimamanda Ngozi Adichie continue to assert that trans women benefit from privilege. This is an insidious line of thinking that relies on positioning transness as a single universal experience. It is designed to silence and exclude trans femmes from feminist discourse, womanhood and activist spaces.

We must ensure that trans women, particularly trans women, have a voice at the forefront of conversations about violence and sexual assault. We must understand that trans women, trans femmes and non-binary people are not a monolith. We must nurture trans narratives without using any individual’s story to silence others. We must develop an appreciation and value for trans women narratives as unique from, but no less valid than, those of cisgender women.