Tragedy of the Common | Environment | Halifax, Nova Scotia | THE COAST

Tragedy of the Common

If the Common is so common, why can't common people decide how to use it? 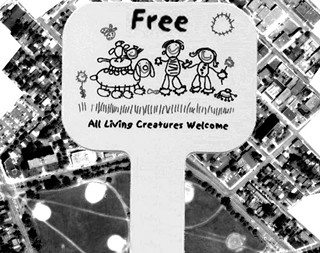 "Picture a pasture open to all." So wrote Garrett Hardin in his 1968 Science article, "The Tragedy of the Commons." His thesis was that a shared natural resource, in self-interested human hands, could only be destroyed. It was a thought-provoking article that is still invoked to advocate and justify private ownership.

The history of our own Halifax Common at times veers toward destruction, but it has survived shared ownership by the people, either because or in spite of municipal government intervention. The Common was once a shared Hardinesque pasture. It has also been a campground, a dump and a race track twice---once for horses and once for cars. It used to be much bigger, but pavement, steel and glass ate the grass.

It was granted in 1763 by King George III "for the use of the inhabitants of the Town of Halifax forever," and we've been arguing about how to use it ever since. Some want more green space, some want more infrastructure. The idea of "daylighting" an underground stream was even considered, but the plan died because it would eliminate three to eight sports fields.

Since amalgamation, those decisions lie with HRM regional council. Councillors from Hubbards to Ecum Secum decide what happens to Robie Street residents and businesses. City staff, led by real property planning manager Peter Bigelow, implement those decisions. He stood before about 75 local residents in late January and unveiled the latest multi-year plan for the North Common. "We're only making minor adjustments," he tells me later.

Most of the plan is good. Pathways are being widened for better bicycle and police vehicle access, as per a new crime prevention strategy. Lighting will be improved, and the fountain is being upgraded. Trees are being planted. A massive new rink is going in for the Canada Games, and will be open to the public for much of next winter. (Strangely, it will be relocated after that, presumably to the district of the councillor who wins the blindfolded cage match.)

The controversy is over mega-concerts. "We're going to upgrade one area," Bigelow explains, at Cogswell and North Park. A hard, permanent sub-surface will be placed under the grass, and a power source and seating will be added. Instead of experimenting with different parts of the Common, concert promoters will be funnelled into one corner, presumably cutting down on Keith Urban-type desecration of the whole park. The cost will be about $600,000.

Bigelow says the Common is ideal for audiences in the tens of thousands because it is walking distance from the homes of 50,000 Haligonians, cutting down on auto traffic. But its immediate neighbours aren't thrilled at the prospect of more surviving Beatles, Eagles and Monkees, and the eating, drinking, pooping masses they bring.

"Mega-concerts don't fit the spirit of common land," says Jill Ceccolini, who has lived nearby since 1994. "They don't support local music, they're not accessible or community-spirited.

"Parking is disrupted, you see people peeing on your yard or trying to sit on your porch, throwing cigarette butts---there's no clean-up outside the actual Common."

Daniel Rainham, who lives near the Common and is an environmental health professor, is put off by the scale of the concerts.

"With such limited space it seems unreasonable to shut down all other uses for one concert," he says. "I don't see anything wrong with having smaller, less invasive shows."

Ceccolini believes that the motivation for mega-concerts is economic gain for a few promoters, who along with the city are "treating the community as a commodity. Maybe the city doesn't have a sense of what people want."

She feels that the money---both this new infrastructure and the subsidization of concerts themselves---would be better spent showcasing local artists. Rainham suggests budgeting for "maintenance of existing facilities and planning for different future uses other than hospitals and schools and parking lots---based on a broader discussion of what people really want."

Ceccolini calls the January public meetings a "slick sell job," rather than the genuine consultation she thinks the Common deserves.

Bigelow disagrees, saying that mega-concerts are just one tick on the city's checklist of cultural programming. He adds that the popularity of mega-concerts speaks volumes. "When you have 40,000 people showing up to a concert they're voting with their feet."

Further consultation seems unlikely. "Council has already had that discussion," Bigelow says. Call it the tragedy of the Halifax Common: what is supposedly for everyone has been decided by the few.