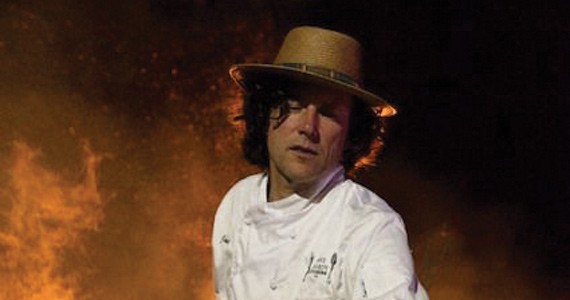 John Fundy
Jamie Kennedy comes back to Congress again this year in a blaze of glory.

Some of the best chefs from the province and around the country will be descending on Grand Pré in the upcoming days for the Canadian Chefs' Congress. The biennial event has held previous incarnations in British Columbia and Ontario.

According to Craig Flinn, who is one of the organizers and helped spearhead the event, the congress' mandate is to connect chefs with farmers and food products from around the country. "We want all chefs to embrace our artisan food producers and be proud of our Canadian food culture," he says. "Being a proud Nova Scotian and always in support of our local food producers, I've always felt that we could and should host this amazing event."

The congress begins this Sunday with tours of local farms, a luncheon featuring pairings with whisky, as well as a fish fry featuring local and sustainable seafood.  It also includes multiple feasts featuring nationally recognized chefs such as Jamie Kennedy from Gilead Cafe and Bistro, the Food Network's Michael Smith, as well as Nova Scotia's Martin Ruiz Salvador from Fleur De Sel and Luis Clavel from Seasons at Atlantica.

The congress also includes a special appearance by Stephen Stryjewski from Cochon in New Orleans. Stryjewski, a James Beard Award winner, brings a historical link with his Cajun wares to the Congress. His inclusion is a nod to the congress' location at Grand Pré, the former home of Acadian settlers.

"I chose to host the event in the land of the Acadian people," says Flinn. "This part of our Nova Scotia history is, on one hand, very dark. But what has come of the Deportation is a rich culinary heritage that has influenced people in many different parts of the world. We asked Stryjewski to help us show how his food can be traced back to this small plot of land in Grand Pré."

Flinn notes that the culinary diaspora left behind by the Acadians was not their only strength. "The Acadians were also people who nearly perfected the art of land cultivation and sustainable agriculture," he says.

Keeping in the vein of farming, the congress' two keynote speakers---Michael Ableman from Foxglove Farm in British Columbia and David Cohlmeyer from Cookstown Greens in Ontario---are known for their work in small scale, urban and organic farming.

Although there are relatively large-scale operations here in Nova Scotia, many of the products and produce used by the chefs during the congress (as well as at their restaurants) will come from what would be considered small farms.

For chefs like Flinn, these are the places that make Nova Scotia's culinary potential both unique and tenuous. "This is a time in our history where small farms are struggling to survive against corporate agriculture and the eradication of heirloom varieties," he says.

But for Flinn, the CCC isn't only an excuse to show off the producers, chefs and foodstuffs of the area, but also the character of the place.

"The congress is also about hospitality, and there is nowhere more hospitable in Canada than Nova Scotia. That makes me very proud."