The Location
Matt Likely has spent years working his way up the gilded ladder of the film industry, starting as a graphic designer "making signs that are used in the background of a movie," to roles like artistic director or production designer.

When luminary auteur Robert Eggers decided that Yarmouth—in particular, what Likely describes as "a spit of land that could be made to look like an island" outside of town—was the perfect spot to film his latest saga The Lighthouse,  Likely was brought on deck to make Eggers' detail-rich vision come to life. "The art department on a film, they're responsible for the look of everything in the movie," Likely explains.

The Background
Matt Likely and the rest of the movie crew split their time between the outside shoot in Cape Forchu and studio locations in Yarmouth proper and Burnside. "A big misconception people have is that we had the structures, but everything was built by Nova Scotian crew members," Likely adds.

After the film tax credit vanished in 2015, Likely adds the prospect of working on a major Hollywood picture like this felt like a thing of the past: "We lost a lot of crew to other places—mostly Toronto. We had a rough couple of years. Now we're trying to train new crew. It's scary when a big movie like this comes along because we want to make a good impression," he explains. A success like The Lighthouse "builds our momentum—helps build our case" as a movie-making destination province.

The Project
With a resume that features work on movies like Hobo With A Shotgun and Weirdos, Likely knows the physical work that goes into making the fantasy-scape of film: "A large part of what the art department on a movie does is fill in the blanks from the script," he shares. "Eggers has an art department background himself, so he's in tune with what he wants."

And what did the director who shot to fame on the back of 2015's modern horror classic The VVItch want? A small cluster of clapboard-clad buildings—a coal house, a machine room—crowned with a towering lighthouse straight out of 1880s Maine. The structure—which Likely says is 70 feet tall from the ground to the top of the needle—was made in three main components. "One of the hardest parts was the tapering at the top. When you build something not from brick that looks brick, how do you fake that cone shape?" he adds. The answer? fake brick panels made from specific molds. "It was a challenge after a challenge after a challenge, like putting a puzzle together."

The winding staircase the lighthouse sports was doused in saltwater to look like aged iron rather than its actual aluminum. 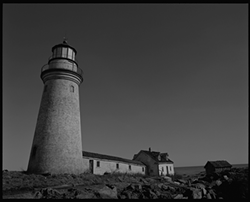 The Results
"I didn't know a thing about lighthouses—I'd been to Peggy's Cove," Likely says with a laugh. Eggers brought old photos and lighthouse keepers' logs for the crew to use as reference, meaning that they could fact-check the smallest detail. "We build a lot of hospitals, morgues, police stations, so the uniqueness of these sets were the best part," Likely adds. "The chance to use modern methods for making traditional buildings and old stuff."