We're all coming of age, all the time; damn it's hot

Get more stories like this delivered to your inbox by signing up for The Coast Daily newsletter.
This is at least my 10th TIFF. I use the festival as a yardstick, ie “I saw that two TIFFs ago” which often happens with “new” releases—they skip a whole calendar year and then everyone’s talking about an old movie. I’ve learned to let things go, like defining the festival you’ve had by the final number of films you’ve seen; striking a balance between Hollywood releases that will be out in the next two months and foreign or likely to get lost smaller features; that there’s always something you’re missing and always someone more important than you. if there are things also screening at the Atlantic Film Festival—this year that includes Paterson, Maudie, Below Her Mouth and Manchester By the Sea—just wait until you come home and fill those Toronto slots with other things. There’s a weird thing about “being first” at festivals, but what could it possibly matter, really.

That said, I’m only here for five days this year and that has ratcheted up the pressure—no time for drinks or friend hangs, just up at 7am every day to jump the streetcar to the Scotiabank Theatre, a Wal-mart of a theatre atop a precarious escalator.

Amanda Knox will be on Netflix later this fall and I know this but I this summer my favourite thing was OJ: Made in America and I need MORE TRUE CRIME. Knox is immediately shown as a single woman with three cats, but in talking head segments reveals herself to be smart and sharp, and a clear victim of the insane UK press—particuarly the moral-less journalist Nick Pisa, who inspires horks of disgust at my 9am screening—and small-town Italian police incompetence. Accused of brutally murdering her roommate—with no motive; she met the girl less than a month earlier—Amanda Knox initially paints her as the prototypical dumb American abroad, studying and partying in Italy. When her roommate, Meredith Kercher, is found murdered, Knox becomes the number one suspect despite having an alibi in the form of her puppy-dog boyfriend Raffaele Sollecito, who later becomes a suspect too. They end up being convicted, having that conviction overturned, having that overturned, and then are finally exonerated. (By the end of it Knox speaks perfect Italian.) Directors Rod Blackhurst and Brian McGinn don’t even need to work to set up their villains, who are clear from the beginning, even if Knox herself posits that she could be a sociopath.

Some of the higher-demand press/industry screenings, including La La Land on Monday, are being held at the Princess of Wales Theatre, a big old beautiful place where the ushers still wear uniforms. The line for Arrival circles the block, one of my pet peeves about this festival—why would you not tell me to cut through the alley 500 feet back that way? Anyway I get in and a get a nice seat for Denis Villeneuve’s latest, a sci-fi thinger I would never bother with were it not for Amy Adams. (Between Adams, Sandra Bullock in Gravity and Jessica Chastain in Interstellar and The Martian, all my best girls keep going to space. As Bullock once yelled, “Fuck space!” 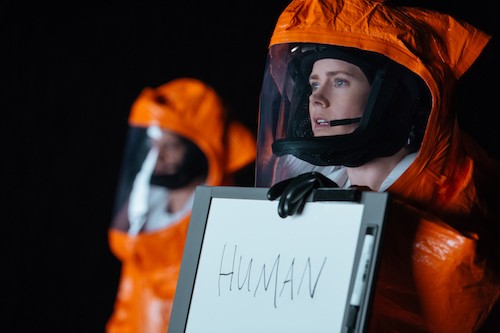 Anyway I am totally wrong in this case; Arrival is a beautiful, touching drama about connectivity and communication. A dozen alien pods arrive on earth—floating above, no attacks yet—and Adams, as America’s best linguist, is pulled in by the army as an interpreter. They essentially want her to create a language from what the aliens spit out to determine whether they plan to attack or not. Jeremy Renner is also there, but that’s not important. For a space-invasion movie, Arrival trades explosions and patriotism for understanding and heart. Despite a late-act twist that throws me off for a few minutes, it’s hugely affecting and should be a big hit in November.

I feel similarly going into A Monster Calls, which is a fantastical family drama starring Liam Neeson as a talking tree. None of that is up my alley. I take a seat next to my friend Kevin Jagernauth, who is based in Montreal and writes for The Playlist. I end up trying to hide my tears from him for the most part; we both love this movie so much. Lewis MacDougall plays Conor, a boy whose mother (Felicity Jones) is terminally ill. Staring down life with his stuffy grandmother (Sigourney Weaver), he turns inside himself, to the artistic ability he shares with his dying mother. One of his drawings, a giant tree (“Monster”) comes to life at night and tells him stories in order to prepare him for what’s to come. Conor is slowly facing his fears but also still running from them; the climax is devastating. A Monster Calls is due out next month.

On Saturday morning I am shortchanged by $2 at the coffee place by my hotel and don’t say anything; two minutes down the block I find $15 on the ground. Advantage: Thorne. I’m doing something out of the ordinary for me—a private screening, at the Varsity Theatre at Yonge and Bloor. This is where press screenings used to be and I miss it a lot—I don’t love Yorkville but this place is above a grocery store and a Starbucks and across the street from the subway, that is to say, handy in every way. The move down to the so-called Entertainment District a few years ago has been a big ol’ linemouth.

Anyway I’m here because I’m going to interview the director of festival closer The Edge of Seventeen, Kelly Fremon Craig, and the producer, some guy named James L. Brooks. It’s just me and two other journalists in the quiet theatre with its nice, fancy leather seats. The movie is terrific, starring Hailee Steinfeld as Nadine, who opens the film announcing to Woody Harrelson that she is going to commit suicide. (She’s not.) This is a coming-of-age story, to be sure—though edgier than most of this ilk—but it defies expectations at every turn—when Nadine’s best friend sleeps with her brother, it’s because she really likes him, not just a reason to throw drama into their friendship; Woody isn’t creepy at all(!); Nadine chases a handsome but dumb boy while a smart and awkward boy, clearly the right choice, pines for her. There’s no villain—even Mean Girls had Regina George—and it’s both acerbicly funny and deeply sad. I’ll write more in November when the film is released.

When I leave the theatre the traditional TIFF Saturday downpour is in full effect, and I’m running late. I use my sidewalk money for a cab—the driver has only been driving for two weeks and is from Saskatchewan, great. I run into Colossal—something something sci-fi; I’m here for Anne Hathaway—and it’s so full there’s only standing room at the back. It’s also in the IMAX theatre at the Scotiabank, which has rows of 50 across with no aisle breaks. Not exactly a welcoming environment in the dark. When I leave I am curt with the volunteer at the door—“You shouldn’t be letting people in.” He looks at his counter. “There are 50 seats left.” Me: “Tell that to the people standing.”

I dart down the hall to one of those little movies, a neurotic New Yorker comedy called Carrie Pilby. I have to sit in the second row. It stars Bel Powley, who gave a standout performance in last year’s terrific The Diary of a Teenage Girl. Carrie is all of 19 and a legitimate genius with a photographic memory, although not so smart she didn’t have an affair with her college professor. Her therapist (Nathan Lane) suggests she make a list of some simple, regular-person things to do, like get a goldfish, drink her favourite childhood beverage (cherry pop) and go on a date. Powley is very good in a role that could’ve been very unlikable—no one likes a showoff!—and I’m really digging on Gabriel Byrne, here as her dad, in his later ensemble roles. This is a slight but worthy film that screams VOD, so keep an eye on Netflix.

After the rain it’s hot as hell so I go back to my hotel and its air conditioner and take in a screener Weirdos, one of two local features premiering at TIFF. (The other is the excellent Werewolf, which I’ll be writing about in the paper in great detail next week.) I think I have erred with the computer option; Becky Parsons’ black and white cinematography is crisp and luminous; I bet it’ll look great on the big screen. The movie is my third coming-of-age story of the day, this one about a Cape Breton teenager (Dylan Authors) who goes on a hitchhiking trip with his girlfriend (Julia Sarah Stone, excellent) to his mother’s (Molly Parker). Written by Daniel MacIvor and directed by Bruce McDonald, it’s decent and weird—Rhys Bevan-John appears as Andy Warhol?—but Parker’s part, as the hippie free-spirit mom, dips toward embarrassing, a caricature surely written that way. More on this when it’s released; we’ll see what happens after the premiere.