TT
In the back row for a well-attending screenwriters' panel...

Now that the festival is past the halfway point, to say fatigue is setting in is not quite right—it’s seeping, it’s blanketing, it’s practically a plague. People are falling asleep regularly, and if you think you’re fighting against it, that you’re young and vital and alive, well, wait until a middle-aged man’s sweet, rhythmic breathing is two seats away from you. Close your eyes once and you’re a goner.

Ahem. I am trying not to write about Black Swan, because I hated it, after loving The Wrestler so, and as I struggled to wake up through my air conditioning-induced cold at 7:30 this morning, the last thing I wanted to do was see a movie about ballet, but it’s the polarizing, Venice-enhanced buzz movie of TIFF, and I’m here for the people.

So I busted it to my first screening at the Bell Lightbox, a lovely if sterile theatre in the old-time, curtain-drawing tradition—Ivan Reitman donated $22 million to its construction; I know this because a title card announcing it precedes every single film—and I got stuck in the front row, but the screen was back far enough so it didn’t matter so much, but I also got stuck next to an overreacting girl who curled up during the bloodier and more lesbionic parts, inhaling quickly and sharply as if she might be hyperventilating, and I’ve been stuck next to exclamatory idiots way too much this fest, and maybe all of this was weighing on me when Natalie Portman appeared in a tutu, and the melodramatic score was so loud I literally put my fingers in my ears, me, who played bass in a grunge band for two years and never wore earplugs once, and I watched her give it her all to Darren Aronofsky, he who introduced the phrase “ass-to-ass” into cinephile vernacular and also single-handedly resurrected Mickey Rourke’s career (shut up, Sin City), and Portman tries so hard and appears to do a lot of her own dancing as Nina, who’s been given the lead in Swan Lake but can’t let go of technique to embrace her dark side—and the Black Swan—so it starts leaking out in the form of blood and rashes and broken nails and Winona Ryder stabbing herself repeatedly in the face, and there’s also a sex scene between Portman and Mila Kunis, and some red contacts and weird demon faces and IT IS SO FUCKING RIDICULOUS I WILL BE LIVID IF IT BECOMES AN OSCAR DARLING.

My dozer film is not the movie’s fault, it’s my cold’s fault—and the guy two seats from me, who was full-on sleeping—and anyway it was only a minute because I find Maria Bello to be one of the most captivating onscreen presences there is, even in things that are beneath her like The Jane Austen Book Club. She and Michael Sheen (common portrayer of Tony Blair and also Liz Lemon’s British fop Westley on 30 Rock) are the parents of an 18-year-old boy who kills 21 people on his college campus. Shawn Ku’s understated film follows them as they deal with the emotional scars of losing their son in horrible circumstances; how their marriage was over before the killings but how they must come together now. The best scenes take place in a motel room, mostly hand-held, and Bello absolutely goes for it, and it’s admirable that they hold themselves back a little bit in a story that’s begging for histrionics.

Indiewire interviewed Derek Cianfrance, writer-director of my favourite fest film Blue Valentine (and I got to ask him the last question!). Ryan Gosling basically looks like this in the movie:

And here's Xavier Dolan (who wrote the script for Heartbeats on the train rides between Montreal and Toronto when here last year with I Killed My Mother), all for Jordan: 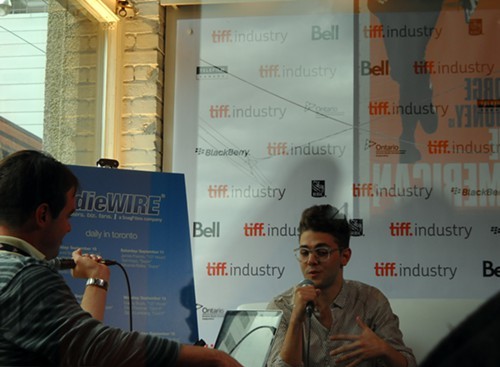 Super—from Slither’s James Gunn—is another hipster/comic hybrid starring Rainn Wilson as a man whose wife (Liv Tyler, right) is essentially stolen by a gangster (Kevin Bacon) and he decides to become real-life superhero The Crimson Bolt with the help of Ellen Page, who is refreshingly, outlandishly hilarious as his sidekick The Creeping Bam (later renamed Boltie). This is a Midnight Madness entry so when he hits someone with a wrench there’s often face-splitting, not to mention vomit in the form of Liv Tyler’s face and some other things I’ve blocked out. It’s over-the-top and ridiculous, but like Kaboom yesterday, a necessary shot in the festival’s napping arm.