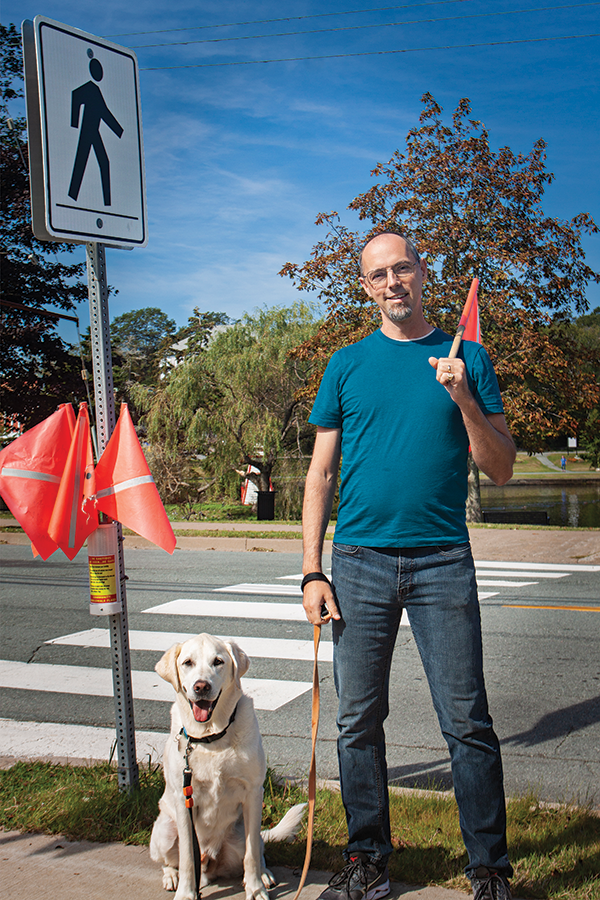 SUBMITTED
Matt Spurway (above) walks Ajax using flags like those installed near 3D crosswalk in Dartmouth.

I t's as easy as look left, look right, they say. In Halifax, not so much, and fed-up citizens are taking matters of safety on sidewalks into their own hands.

All three have come up against municipal staff with their ideas for improvement—now well versed in the slug-paced world of traffic rules.

Matt Spurway is vice president of the Crosswalk Flags Society, a not-for-profit that installs crosswalk flags in communities all over the Maritimes.

"Sometimes we face an uphill battle with the municipality about where flags are permitted to go," Spurway says.

From the get-go, city staff opposed crosswalk flags as a solution—but later buckled under council's demand.

The orange-pink flags with hand written safety messages scrawled in sharpie are placed at basic crosswalks and crosswalks with flashing lights, also called RA5s. But the society wasn't allowed to place flags at four-way stops, at stop signs or roundabouts.

"It's not in my mind a terribly powerful argument," Spurway says.

In 2017, city staff drafted an administrative order that placed firmer parameters on crosswalk flag programs. One such parameter was the banning and removal of RA5 crosswalk flag installations, which make up a third of all 180 crosswalk flag locations in HRM.

Spurway has a personal interest in pedestrian safety. His great-uncle was recently struck and killed by a vehicle in a crosswalk. The accident sent a ripple through Spurway's family and community.

"It's such a traumatic event for everybody," Spurway says. "The driver doesn't get away with it just because they're not hurt. Neither do all the witnesses, the first responders, the victim or the victim's family."

Spurway's uncle's story is part of a wider trend.

Between January and July 2019 there were 126 vehicle-pedestrian and vehicle-bicycle collisions according to a Halifax Regional Police and Halifax District RCMP report.

Ninety-four pedestrians were victims of car collisions with injuries ranging from severe to minor or none at all.

One collision resulted in the death of a 69-year-old woman.

Nearly three-quarters of this year's incidents happened on clear, sunny days. And over half occurred in crosswalks.

Preventing similar experiences is Spurway's biggest motivator and the reason he continues his work, despite roadblocks from the powers that be.

"It's frustrating because we feel like we're doing something good and yet it feels like we're having to fight for it."

For Doug Carleton, his fight is both personal and practical. He defiantly created a 3D optical illusion crosswalk on Dartmouth's Erskine Street. He achieved the affect by painting black rectangles between white crosswalk panels along the white sidewalk.

"It's a little scary," he says of the street. "There's a hill that causes blind crests on parallel streets and Erskine is one of them. We constantly get these people that are literally—tires are screeching as they are taking these 90 degree turns trying to cut a few seconds off their commute."

But cutting corners has tragic consequences. Carleton's neighbour was struck by a vehicle at a crosswalk a few streets over, which left her with permanent brain damage.

"You can see it, but you don't get the feeling that you're going to hit the blocks until the optical illusion is heightened by somebody walking across it," he says. "And that's exactly when you want them to think there's an immovable object in front of them and hit the brakes. That's when the artwork pops."

For several days, Carleton was up before the crack of dawn painting the street. He estimates he spent 80 hours hunched over the pavement. He grew attached to the piece as it neared completion and he couldn't wait to take on other streets in the neighbourhood.

But those dreams soon fizzled. On August 22, two days after the crosswalk's completion, Carleton's work was hosed down the gutter by a municipal crew. Carleton says a police cruiser was present at the scene.

"They wanted to send a message," he says.

A month prior, Carleton was given a police warning after he began a chalk prototype of the crosswalk. The officer recommended that Carleton call his district councillor for permission. 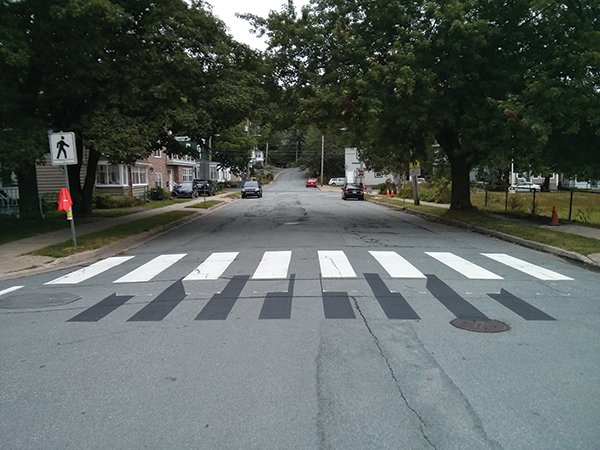 Councillor Sam Austin approved of the idea, though he doubted the crosswalk would get the go-ahead from staff.

A month passed before Carleton heard back from Austin. Though the call was to inform Carleton that crews would be at the crosswalk by morning.

Austin told The Coast that his staff had assumed Carleton gave up on the crosswalk because they no longer saw markings on the ground.

"I knew my city would say no," Carleton says. "That's why I didn't ask in the first place."

Carleton says he's lost faith in the democratic process. He says the traffic authority hasn't been transparent or consistent.

At a recent public hearing for the Centre Plan, Carleton came to express his frustration about the sidewalk, and was told that that particular public hearing was not the place for him to bring his concerns.

For Martyn Williams, a recent newcomer from England—and fervent sidewalk safety tweeter—pedestrian safety is a systemic issue. And it starts with changing car culture.

"Car drivers are so established here, there's been nothing really to challenge car use," he says. "I think people are very nervous about status quo change."

Williams says he used to take his safety for granted when he lived in the United Kingdom.

"You don't really have to think about safety," he says. "Things happen so you don't have to worry about cars hitting you. I was so shocked that it wasn't the same here."

Williams moved his family to Nova Scotia in 2016. They quickly found themselves on edge whenever they headed out the door.

"The infrastructure is much more geared up for keeping cars moving here," he says.

Williams says the main culprits of pedestrian-vehicle collisions are flawed road design and infrastructure. He explains that, unlike UK roads, Nova Scotia roads are wider which allow cars to travel faster. He says there are less physical safety barriers in place to keep pedestrians out of harm's way.

While out on a walk with his children, Williams wondered if anyone else in the city felt the same way he did. So he created the HRM Safe Streets for Everyone Facebook page, which serves to help people report and monitor issues on the roads including faded crosswalks and sidewalk obstructions.

He says councillors are more concerned with traffic flow, which does little to prevent pedestrian-vehicle collisions.

"Councillors see the issue as very often not within their means to change," he says. "They get very frustrated with traffic staff, with province, et cetera. I think we'd make a lot more progress if we reviewed our policies."

Williams works with his wife as a legal advisor, but he's spent much of his time researching and speaking with road safety experts in order to create a petition with a list of possible improvements to regional council this month.

The medical director of Trauma Nova Scotia, Rob Green, proposed—in Williams' style—via Twitter a ban on right hand turns for busses in light of the trauma he sees in his job. And at last week's transportation standing committee, councillor Shawn Cleary asked for a staff report on the benefit of restricting right hand turns for vehicles—citing the latest monthly reporting on collisions that says 19.5 percent of incidents involved a left turn vehicle movement. On September 26, the committe approved Cleary's request to staff.

Williams is also preparing a petition for the province to have funding and a strategy in place to address road safety. The petition is William's response to the province's car-centric transportation policies which he says don't properly address pedestrian safety.

Williams' biggest concern is that pedestrian-vehicle collisions are being normalized. But he's hopeful that with more citizen vigilantism, these incidents will be kicked to the curb.

Once staff's report about right hand turns returns to the transportation standing committee, it would then head to regional council for discussion and deliberation. In the meantime you best look right, then left, then right again—just to be safe.

A cut above the rest