Three Mezzos (and one piano) 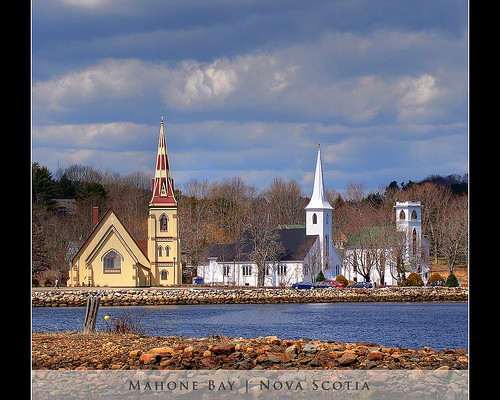 One of the highlights of the summer for me is seeing the Halifax Summer Opera Workshop’s sensational productions, and I was really disappointed to miss them this year.

However, all was not lost as I did get to see HSOW’s Artistic Producer and marvelous Mezzo Nina Scott-Stoddart in concert with singers Claire Mallin and Paula Rockwell, and pianist Jennifer King in beautiful Mahone Bay.

The concert was part of the Music at the Three Churches series, and it was a doozey. These women offered up a beautifully paced concert that had something for everybody. The program ranged from the familiar, classical “Habanera” from Carmen to the lovely, contemporary Allister MacGillivray tune “Here’s to Song”.

Despite the fact that in “The Alto’s Lament” we learned that it sucks to constantly sing the harmony, there were plenty of tunes that showcased the rich Mezzo voices.

The audience favourite was probably a wonderful Flanders and Swann chestnut called “A Word on my Ear”. Scott-Stoddart had the audience rolling in the aisles as she cast about for the right note while declaring “I’m tone deaf”.

The last concert in the series is on September 9th at Mahone Bay’s Trinity United Church, and it showcases the winners of the 2nd Dalhousie Student competition.