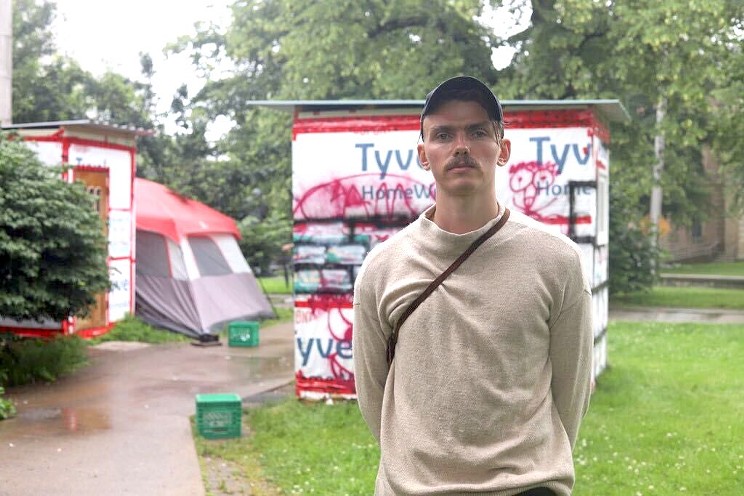 The Coast
“Now that the city has gone back on its word, we can’t trust that anything else will wait ‘til the 13th,” says Halifax Mutual Aid’s Campbell McClintock.

HRM says its July 13 deadline wasn’t a promise to leave the shelters alone until then.

Earlier this week, Halifax gave itself a deadline of July 13 to remove all the temporary crisis shelters it knows about on municipal property. And while Tuesday is still four days away, today—Friday—three of these shelters were carted away by city staff.

“Now that the city has gone back on its word, we can’t trust that anything else will wait ‘til the 13th,” says Campbell McClintock, spokesperson for Halifax Mutual Aid, which helped build the structures.

This shelter was occupied. The occupant was never approached by the city with other housing options. They were at their job when the #Halifax City Council removed their shelter. pic.twitter.com/LR7wOcP0lO

Along with other HMA volunteers, McClintock remains on site at the old Halifax Memorial Library grounds on Spring Garden Road to ensure that no other shelters are removed. He told The Coast that the people whose shelters were taken are receiving assistance. “Our team is coordinating with them and supporting them in whatever way they need right now.”

The shelters were taken from Raymond Taavel Park and Victoria Park in downtown Halifax, and Jamieson Street in Dartmouth. McClintock says they were occupied, but no one was in them at the time they were removed.

“The city is acting where they presumed that shelters are unoccupied. However, they've not coordinated whatsoever with Halifax Mutual Aid, nor the occupants of those shelters,” he says. “Nor have they considered that there's a waitlist of 21 people ready to move in those shelters whenever they become available.”

HMA says it’s not known where the shelters were taken or what happened to the contents and personal items that were in them.

“There's a number of reasons why the shelters might be unoccupied for an hour. People go to work, people go on errands,” McClintock says. “So, for the city to go in and remove these shelters and presume them unoccupied feels harmful and violent.”

HRM vows to remove temporary shelters without warning after July 13: The municipality is “optimistic” everyone will leave the crisis shelters willingly and move into a temporary housing situation.

Crisis shelter fire creates a liability issue for HRM: A municipal councillor says the city wouldn't want to be held responsible for any future fires.

On Friday afternoon, HRM released a conflicting statement that says there were no personal belongings located in the three shelters removed, and that all three tenants had “accepted temporary accommodations offered by the province.”

“The deadline date of July 13 was not a commitment by the municipality to refrain from removal of the temporary shelters prior to this date,” says the HRM statement, which has no signature. “Rather, it was a notification that the shelters must be vacated by occupants and removed by those who installed them no later than July 13.”

This is what HRM’s original statement, issued Tuesday, July 6, said about dates: “Today, a notice is being issued to advise occupants of temporary shelters located on municipal property that they must vacate and remove all personal belongings. The notice also advises those who installed the temporary shelters that they must remove the structures from municipal property. A deadline date of July 13, 2021 has been given to remove the shelters–failing which, the shelters, and any personal items contained within the shelters, will be removed by the municipality on or shortly after this date without further notice.” (Emphasis added.) 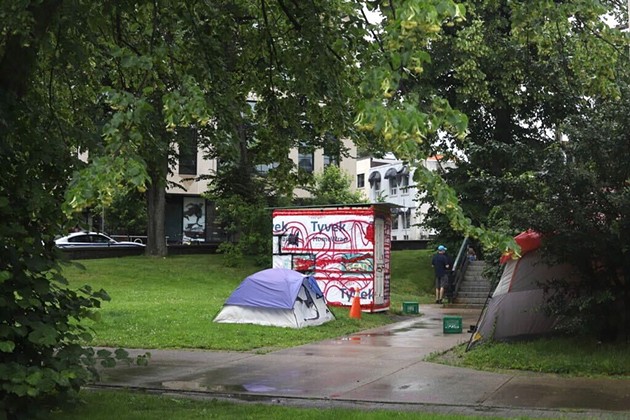 The Coast
“There's a number of reasons why the shelters might be unoccupied for an hour,” says HMA’s Campbell McClintock. “People go to work, people go on errands.”
Over the weekend, Halifax Mutual Aid is asking for help from supporters to keep an eye out for anything that may indicate another early removal.

“We're asking the broader community to be mindful of the shelters in their neighbourhood and keep eyes on anything,” says McClintock. If you see someone like a police officer or a city employee show up, “notify Halifax Mutual Aid through socials,” like on Instagram, Twitter or its website.

Since last week, HMA has received lots of public support. Noah Hollis, a masters of public administration student at Dalhousie University, showed up at the old library Friday afternoon to show his support for the people living in the shelters in any way possible.

“I think it says something that people can't ignore it, that it's out in the open,” he told The Coast. “Some people say that they want these to be moved to somewhere less visible, but we're not here to push aside what's happening. These are members of the community, and they have a right to live here as much as everyone else.”

As of now, McClintock says there’s no rally of support being planned yet for the occupants of the shelters. “We're waiting for direction from the occupants and what type of support they desire.”