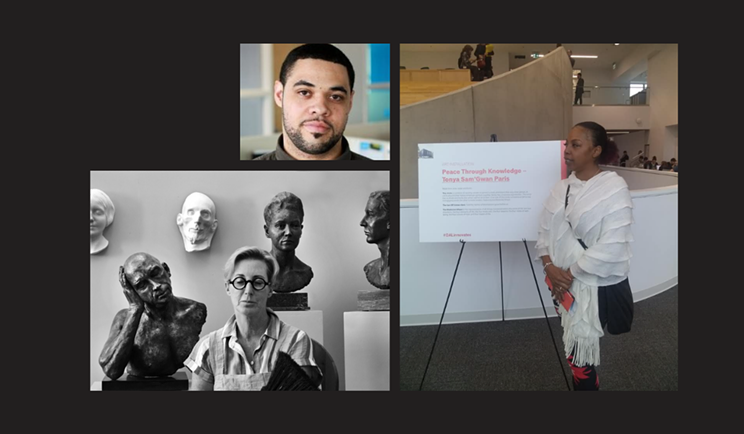 Chippie Kennedy, Marven Nelligan and Tonya “Sam’Gwan” Paris are in the running to create a tribute that will be unveiled later this year.

Back in 2018, when Viola Desmond first graced the $10 bill, the North End Business Association was deep in revelry, with a host of events marking the occasion. However, one element missing from the celebration of the Nova Scotia civil rights icons was something, well, iconic. A permanent, public monument to Desmond. But it was coming.

“One of the things that we also want to achieve as a committee was to do some sort of legacy piece that recognized Viola’s contributions to the business community—and the community as a whole,” says Tracy Jackson, executive director of NEBA. That's why the push for a lasting tribute to Desmond, who once owned a beauty salon on Gottingen Street, was a need both obvious and immediate, both “substantial and meaningful for the community.”

Halifax's north end given $111,000 in funding for public art: The money will go towards building a permanent monument to Viola Desmond and 40 other new works.

Art against the odds: Tonya Lynn Paris discusses joining the Canadian army, serving as a military police officer before finding her way to become Sam’gwan the Artist.

Now, almost four years later, that lasting tribute is a huge step closer. In an exclusive interview with The Coast, Jackson says a shortlist of artists to create a Viola Desmond memorial has been finalized from 16 proposal submissions.

“We got amazing feedback from the community on how they want to see Viola’s story told and how they wanted to see her recognized. A lot of what came out of that was talking about Viola's strength and her perseverance. But also, not just to focus on the tragedy that had happened at the theatre,” Jackson says, adding that the submissions—many of which were from emerging artists and African Nova Scotian artists—have been whittled down to three possibilities.

The jury is now tasked with choosing between concepts put forth by artists Tonya “Sam’Gwan” Paris, Marven Nelligan and Chippie Kennedy, ranging from bronze sculpture to virtual reality-based art. The decision on a finalist will be made sometime in February, says Jackson, and the finished piece will be unveiled in the summer or fall of 2022.

A federal funding push of $111,000 doled out in December—to be used for the Desmond memorial as well as a series of banners throughout the neighbourhood to create a permanent art crawl—helped finance the project, alongside private donations. “The winning artists will receive $100,000 to to produce the piece,” Jackson adds.

The final work will be located on Gottingen Street, across from Desmond’s former salon (now the site of the YMCA). “It's also going to be between a barber shop and a new, opening soon, Black women's beauty salon,” Jackson says, noting the location’s symbolism.

“We're really just hoping that this sort of sets the path for future projects like this, and recognizing other individuals, historical figures from our community, that also deserve recognition. And also hoping that we can get more art in our community and…have the community’s voice reflected in the art that's in our community.”