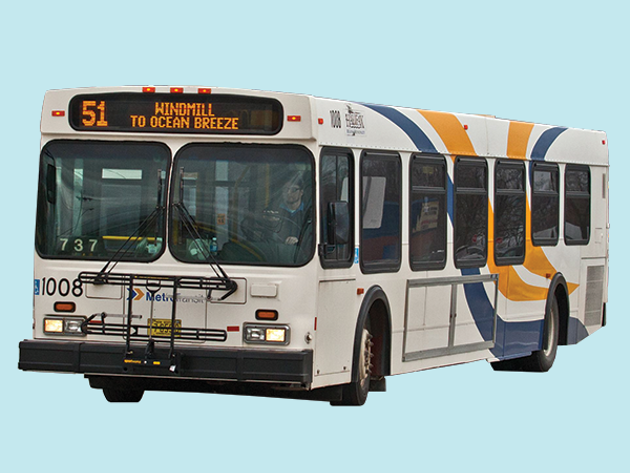 The Coast
"We have drivers sleeping in their cars or in the chairs at work,” a bus driver says. “That’s why they quit.”

Throughout the summer, staffing shortages at Halifax Transit have led to an increasing number of cancelled bus trips. The city cut services twice in July and once in August, accumulating a total of 75 cancelled trips affecting 34 routes across HRM. Because of the shortage, transit operators are being forced to work overtime to keep the increasingly stretched-thin service afloat, and many are at the breaking point.

“We're having a severe, elevated level of burnout among our drivers. They're just walking zombies a lot of times because they're going 14, 15, 16 hours a day, for six days a week,” says Shane O’Leary, president of the Amalgamated Transit Union 508, which represents Halifax Transit workers. He says most drivers are working 30-40 hours of overtime a week, and ferry crews and maintenance workers are taking double shifts. “The more overtime they force on the members, the more destroyed and beaten down they get, and it gets to a point where people just can't take it anymore.”

“It's very difficult to maintain a healthy home life because you're not reliable. Nobody can rely on you, your children can’t, your partner can’t, because they don’t know if you’re going to be here,” says a longtime bus driver we’re calling Kate. “When you're driving the bus and you're finished your first or your second piece—and they don’t have a relief for you, you have to keep driving.”

According to the union, 40 transit workers resigned and 22 retired between January and July 2022. “We have people resigning every day. People walk up to the window every day and say ‘I'm done,’” O’Leary says. “If the city doesn't do something drastic immediately, then they're not going to be able to retain employees.”

“It's like a total mutiny; people just don’t show up,” Kate says.

Halifax Transit is currently holding recruitment drives, but O’Leary says it won’t work unless a financial incentive is offered, which right now is not happening.“Twenty-three years ago when I applied there was a lineup at the door, and now they can't find people,” he says. Bus drivers make $21.45 an hour during training, and $22.88 for their first year on the road. He says the top rate, which takes four years to get to, is $28.61—six percent below the national average. “They offer more than these private organizations. It's unionized. There's a great pension. But if they can't get people to come in and work and go home and be able to pay their bills—when you're starting at $3 or $2 and change below the living wage in Halifax, Nova Scotia—for a municipal organization that's pretty sad.”

The city has the money to pay operators more, O’Leary says, and it can come from management. Eighteen Halifax Transit supervisors and managers are on the sunshine list. Executive director Dave Reage makes over $200,000 a year. O’Leary says the transit union has a bit fewer than 1000 members, while Halifax Transit has 156 people in management positions. That’s one manager for every six employees, which O’Leary says is double the national average. “How is that acceptable when those people all start at a significantly higher wage than the worker that's out there—excuse my language—doing the shit work?”

And it’s the shit work that makes retention of transit operators so difficult. As O’Leary says, “the financial incentive is what gets you there, the work is what keeps you there.” The worst part of the job, Kate says, is wide split shifts that span 12 hours and can start and end in different locations, and drivers aren’t paid for travel time between them. A split shift means working for four hours, then getting a break for a few hours, and then completing the last four hours. As she explains, you can start at 5am in one place, finish that shift, then ride several buses to get back to your car for your break and then travel out to another location for the second shift. After that shift, which can end anywhere, you have to travel again to get back to where you started and finally arrive home at 6pm or 7pm, all while being paid for only eight hours.

“We've always said your splits are terrible. It's why you're losing drivers,” Kate says. But management won’t listen. “They need to tweak the shift so that the drivers are not losing their break time chasing buses to get back to the garage.

“If you make better shifts they’ll stay because it’s good money. But it's not good money when you're only $21 an hour and you're away from home 15 hours a day. If you take all your travel time that’s not paid and divide it into your wage as a new driver, you're looking at around $11, $12 an hour,” she says.

And it gets worse. Due to the shortage, drivers are doing the work of one and a half drivers. It’s in their contract that they can be called in to cover shifts, and they can’t refuse. Of course it was only supposed to happen occasionally, but “it’s being totally abused now,” Kate says. “Day after day you do your whole shift and part of another person’s shift.” For example, you could have a shift from 11am to 7pm and get called in to work 6am-11am before that. In Kate’s case, she’s been called into work 12 hours a day six days a week most weeks for two years. “The employer just doesn't care. They continuously force you because they don't care,” she says.

More concerning, is drivers can start at 6pm and go to 1am, and then get assigned to cover a 6am to 10am morning shift after that. Drivers are entitled to eight hours off in a 24-hour period, and in these cases that eight hours is 10am to 6pm, when they start the cycle all over again. Kate says some drivers are doing this for days in a row. “We have drivers sleeping in their cars or in the chairs at work,” Kate says. “That’s why they quit.”

“You're driving a 40-foot or 60-foot, 20-tonne bus down a narrow road with cars parked on both sides. You've got traffic to deal with, you've got pedestrians to deal with, you've got so many other things going on that are stressful in the job, and then you have to worry about all your passengers as well,” he says, “so there's hundreds and hundreds of things that go on every moment of your day as a transit operator.”

And while the decisions to cut and change routes are made by management, it’s the drivers who have to deal with the public’s reaction, he says, and as such they’ve gone “from frontline heroes to zeros.”

O’Leary says the troubles with transit began long before COVID. “About four or five years ago we started taking a real slide. It’s the worst it’s ever been right now.”

The union’s contract expired last August, and it's still waiting to negotiate a new one. The earliest dates to do that are the first week of October, but that could be stalled for another six to eight months, O’Leary says. Until then, “anything that's not working will continue to not work.”