From now until the end of August, you can enjoy some very insta-worthy bagels while supporting a good cause, thanks to the Rainbow Bagel Campaign. In a collaboration between Dreadlocks & Kindness and Stone Hearth Bakery, for every six-pack of Pride-themed bagels sold, 25 percent of the cost will go to the Youth Project and the Rainbow Refugee Association of Nova Scotia.

The Rainbow Bagel Campaign was born when Jesse Nervais (pronouns he/him/legend), founder of Dreadlocks & Kindness, tried to sell a table painted with the colours of the Pride flag. In Febuary 2021, Nervais, who is gay, posted the table on Facebook Marketplace, and the listing was flooded with homophobic comments. The incident pushed him to “get off the bench as far as being an activist,” he says in an interview with The Coast, and inspired him “​​to do something about supporting the LGBTQ community.” Nervais launched his organization, Dreadlocks & Kindness, that same month.

With Dreadlocks & Kindness, Nervais aims to empower others through motivational speaking, workshops and fundraising. “I think for a lot of folks who are part of communities that have dealt with instances of discrimination and opression,” he says, “it takes a lot of courage, it takes a lot of energy to decide to get off the bench and lead in some way.”

In the campaign’s first year, 2021, people bought 4,200 rainbow bagels. “That’s the number to beat,” Nervais says. He also admits the campaign isn’t necessarily about selling the most bagels. “More so about just making sure that there are precedents being set, that for folks who are selling rainbow products, that they are actively also supporting a local rainbow charity or making a point to review their rainbow policy in house.

“You know, Pride is a protest as much as it is a lot of fun,” Nervais says.

Stone Hearth Bakery manager Scott Butler gave The Coast an explanation on how the rainbow bagels are made. Bakers divide the plain bagel dough into four pieces, and then add high-quality food colouring—“not the cheap stuff in the grocery store”—to each. Then each coloured piece is layered on top of one another, and the whole thing goes through a machine that twist the pieces around, achieving the rainbow look. Finally, bakers hand-roll the dough into bagel forms.

Contributed
These rainbow bagels are ready for the oven.

Butler’s favourite part of the campaign is seeing the smiles on customers' faces when they first lay eyes on the colourful bagels, which are “pretty eye-catching.” He says the campaign went well last year, but is already even better this year. The bakery received 50 percent more bagel pre-orders compared to 2021.

The rainbow bagel campaign has a mascot, too: Dame Bow, “the non-binary rainbow bagel” made from Mr Potato Head pieces stuck into a bagel. You can watch their adventures to the places around the city selling the Pride bagels on the Dreadlocks & Kindness Instagram. 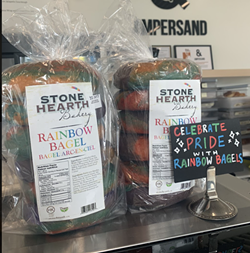 You can buy rainbow bagels at Stone Hearth, Pete’s Frootique and Ampersand Cafes. You can also order packs of the bagels to sell. Each six-pack costs $5, with $1.50 going to the charities (75 cents each to the Youth Project and the Rainbow Refugee Association).

Nervais says the campaign isn’t an instance of “rainbow capitalism” or “pinkwashing,” when corporations exploit the 2SLGBTQ+ movement to make a profit. “If it was just the bakery, you know, that would be the question. But this is a partnership they've done with me to help these two charities, so I feel like it's very different,” he says.

Nervais still has the Pride table, and intends to keep it. He says the story of how the table sparked his involvement in activism has given it a powerful legacy.