The Wet’suwet’en struggle is far from over

The RCMP believed the fallout from their assault on the Wet’suwet’en would be contained and minimal. They have already been proven wrong. 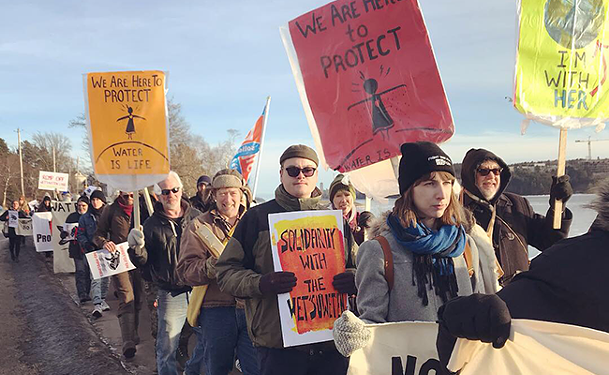 SADIE BEATON
Marchers take to the streets on Monday in solidarity with Wet’suwet’en. Author Sakura Saunders (not pictured) is an Indigenous solidarity activist who has been a supporter of the Unist’ot’en camp since 2010.

Sixty-five kilometres up a logging road near Houston, British Columbia, just beyond a river from which you can drink directly, lies an territory actively defended by its original people. To enter, you need to go through a free, prior, and informed consent protocol designed to keep people out who do not benefit the land and its people. Once inside, you find a flourishing off-grid community with gardens and large buildings for housing, food storage, cooking and healing, built by the land defenders and their allies.

The Unist’ot’en (one of the five Wet’suwet’en clans) have been building permanent infrastructure on their (territory) since 2010 as a strategy to resist unwanted pipelines. They have built a holistic healing centre on the path of these pipelines, where people can go to heal from trauma while learning to live off the land.

“The residential schools and the removal of children from our nations and communities have been the government’s tactic for removing the out of the child,” explains Freda Huson, spokesperson of the Unist’ot’en camp. The healing centre was built for the spiritual, cultural and mental healing of her people.

Starting with the support from the Unist’ot’en clan, grassroots Wet’suwet’en like Huson built up the support of the Unist’ot’en camp to the point that they now have unanimous support from all of the hereditary chiefs of the Wet’suwet’en nation. These are the same hereditary chiefs who were named in the ground-breaking Delgamuukw v. British Columbia Supreme Court case that recognized Aboriginal Title. It is also this ruling that recognizes that the jurisdiction of band council chiefs is limited to reservations.

It was this hereditary leadership that gave tentative permission last Wednesday to allow access to the RCMP and Coastal GasLink into Unist’ot’en Yintah (territory). They came to this ‘agreement” because of the threat of violence on their people, who faced off with heavily armed RCMP at the Gitimt’en checkpoint raid on January 7.

“FORCE IS NOT CONSENT,” read a statement on the Unist’ot’en Camp’s Twitter feed. “Two head chiefs are in mourning. According to Wet’suwet’en law, a bad omen comes to your family if proceeding w/ normal business while mourning.”

That this RCMP offensive came at a time of mourning was likely no coincidence.

I remember when hereditary Chief Smolgelgem announced (on November 13) that his mother had entered her final days. It was not six days later that Coastal GasLink sent their e-mail to Huson stating that it was going to start “pre-construction” activities. This is what eventually led to the injunction that was enforced on January 11—the same day that Smolgelgem’s mother was laid to rest.

I can’t help but notice the deliberate nature of this most disrespectful and opportunistic schedule of events. It is obvious that a strategic decision was made on the part of Coastal GasLink and the Canadian security establishment to attack this nation at its most vulnerable. This blatant colonialism, the RCMP violence, the forced compliance at gunpoint and the lack of acknowledgement of the traditional Wet’suwet’en governance system, which has been recognized by the Supreme Court for decades, can not be allowed to win.

In 2015, the government of Canada described the Unist’ot’en as “the ideological and physical focal point of Aboriginal resistance to resource extraction projects,” in a risk assessment report. Since that time, their support has grown to include Union of BC Indian Chiefs, the Assembly of Manitoba Chiefs, BC Civil Liberties Association, the Anglican Church of Canada, BCGEU and many other major institutions and grassroots justice groups.

Protests around the country have continued to grow in size and intensity for more than a month now as this crisis has unfolded. Highways, intersections and even the Armdale Rotary have been disrupted. Solidarity actions happening around the world are targeting Canadian consulates, embassies and institutional investors. Government functions are being disrupted and TransCanada offices and facilities are being occupied. The RCMP believed the fallout from their assault on the Wet’suwet’en would be contained and minimal. They have already been proven wrong in this assessment and the struggle is far from over.