The Western Common is a colossal mess | News | Halifax, Nova Scotia | THE COAST

The Western Common is a colossal mess

Before the city opens the future Wilderness Park, it will have to decide what to do about ATVs.

Big Indian Lake
I often hike around the Five Bridges Lakes Wilderness. The Bluff Wilderness Trail is simply amazing, but lately I've been poking around the Old Coach Road, which was a 19th century stage road across the Chebucto Peninsula. The remaining bits of the Old Coach Road stretch from the Indian Lake Golf Course in Goodwood to Glen Margaret on St. Margaret's Bay. The western section contains the best preserved parts of the road, and a nice hike is a triangular route from Hubley, down Big Hubley Lake Road, which turns into Wodens River Road, to Glen Margaret, then back east on the Old Coach Road, to the fire road and north again back to Hubley.
click to enlarge

Hiking the length of the Old Coach Road entails a water crossing.
The last few weeks, however, I've been exploring the eastern section of the Old Coach Road. It's an easy hike from the golf course to Big Indian Lake, but Little Indian Lake presents a barrier, or at least it did to me the day I was there because I wasn't prepared to pull myself across the stream along a rope left for that purpose. I was alone, so a mishap would be problematic, and I didn't have a backpack with me to carry my clothes after I stripped down. So I decided I'd get to the next portion of the Old Coach Road another day, by hiking south from the Otter Lake Landfill.

This hike served another purpose, as well. It gave me the opportunity to check out much of what is called the Western Common, and which is one day planned to be a HRM Wilderness Park. Here's a map of the city's planning for the park (full-sized version here): 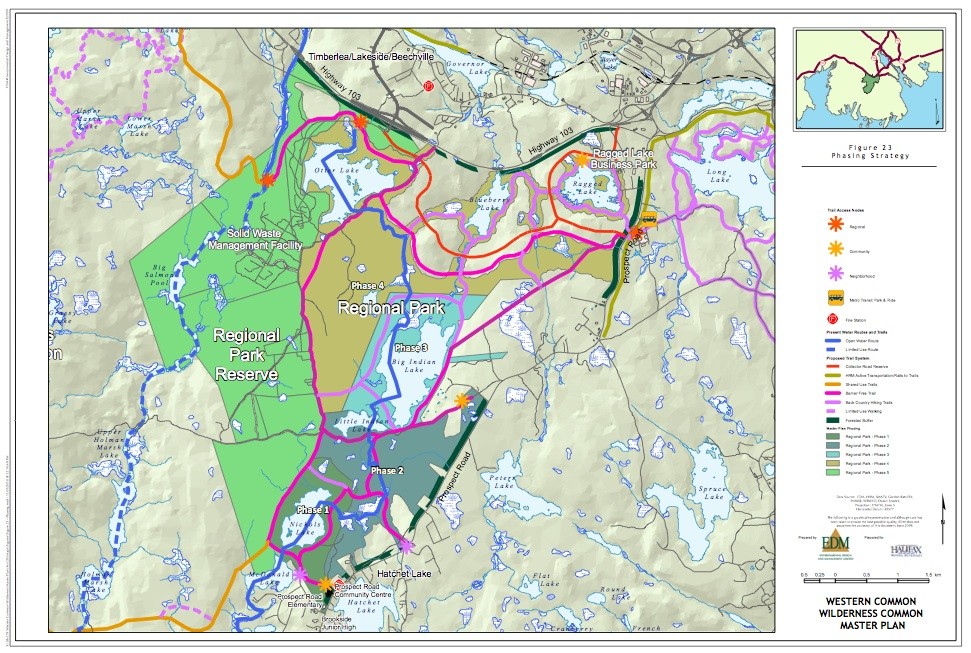 I have bad news: The Western Common is a colossal mess.

My hike started pleasantly enough. Greenhead Road took me directly to Otter Lake. The eastern shore of the lake is far removed from the landfill on the western shore. In fact, you can only just make out a couple of buildings associated with the landfill, across the way.

But Greenhead Road loops around the lake and comes up to the back side of the landfill. This is the location of a relatively new landfill-related operation I wrote about in April. There is a drumlin 1.5 kilometres south of the landfill, and that drumlin is the source of clay being used to cap one of the cells of the landfill. Earlier this year, Dexter construction built a road connecting the landfill and drumlin. 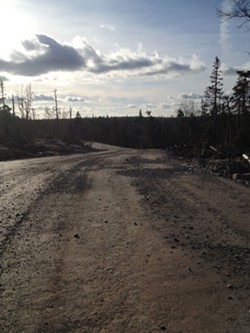 The new road connecting the landfill to the clay drumlin.
This operation is much, much larger than I had envisioned. For one, the road is 30 feet wide, presumably so two trucks can pass each other, coming and going from the drumlin. Thirty feet doesn't sound like much here in the city, but in the context of wilderness roads and paths, it's enormous. By comparison, the Old Coach Road is about 10 feet wide, most places. Beyond its width, however, is just how substantial the road is. It was built to handle heavy trucks, and looks like it: the new road doesn't follow the contours of the land, but bulldozes right through them, with tonnes of gravel and large culverts.

Then there's the drumlin. Or rather, what used to be the drumlin. Imagine a hill as big as Citadel Hill, and then imagine it gone, and that's pretty much what we have back behind the landfill.

The clay removal is still going on, and will be "for the foreseeable future," city spokesperson Shaune MacKinlay tells me today. After all the clay is removed, there will be remediation of the site—it will be covered with soil and revegetated—but right now it's a giant pit of muddy clay, which is to say, an ATVer's wet dream. Sure enough, Sunday there were about a dozen teenage boys, tearing the place up. I can't say that I blame them. It looked like great fun, watching the machines doing donuts, flipping over and otherwise moving about with abandon.

MacKinlay says the site is technically off-limits, and the road is gated, but of course that won't deter ATVers, or hikers for that matter. I don't see that they're doing anyone any harm, and it is public land, after all, so I'm not particularly concerned about the ATVs at the drumlin. 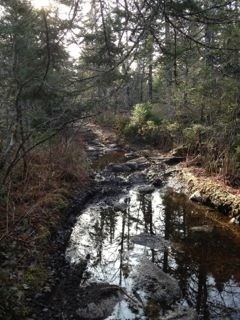 A not particularly bad stretch of the Old Coach Road.
It's everywhere else where ATVs are a problem. The rest of my hike was nominally down to Old Coach Road, along that road and back to Greenhead Road, and I did follow that general path, more or less. But thanks to ATV-caused erosion, the roads are no longer roads. They're canals. Some of the canals stretch many hundreds of metres before reaching a dry spot. And the ATVs have so disrupted the natural watercourses that the entire forest is basically a swamp. I waded through a lot of that mess, sometimes up to mid-thigh level, fell down a lot into bog holes and otherwise sought out dry land, which was rare. In practical terms, for anyone who wants a honest hike in the woods, you're not going to find it in the Western Common.

Last year, when the Five Bridges Lake WIlderness Park was formed, there was an agreement to continue to allow ATVs on the portion of the Old Coach Road in that park. This agreement was based in the political realities around the park: in order to get the largest possible park boundaries, wilderness advocates accepted the ATVs on limited portions of the park.

This is going to be a tough pickle for the city. The Western Common wilderness abuts, and is supposed to compliment, the Five Bridges wilderness. It's hard to see how the city could throw up a "no ATVs past this point" sign in the middle of the woods and expect it to stop ATV use. More to the point, ATVs are a reality, and so arguably they should be accommodated. But if we're going to have any true "mixed use" in the Western Common—that is, if it's going to be used by ATVs and anyone else—hikers, mountain bikers, etc—then the city is going to have to spend a lot of money, and I mean a lot of money, first to fix the damage that has already been done, and secondly to maintain the roads into the future.

Perhaps there's some potential middle ground. Maybe there drumlin site can be maintained as a permanent ATV park, with much more limited access elsewhere. But this issue is not going to be resolved easily.