Multi-genreational The WAYO bring that locked in hip-hop groove to pop. 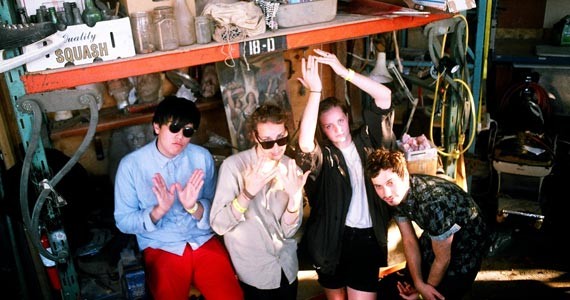 Seen from one angle, The WAYO is a four-piece band that met at college---an oft-heard narrative. Gray Rowan, bass and keyboards, explains: "We all went to King's College, we all did the first-year program there. The funny thing is we all played in different bands first year. We actually played in a battle of the bands against each other at one point. Me and George [Kingston, percussion] played in a band doing mostly soul and funk covers; Charlotte [Wilson, vox, sax, keyboards] was doing more of a folky acoustic thing." Mike Fong, who plays guitar and "makes sounds with pedals" adds, "I was doing a lot of atmospheric sounds but post-rock mainly."

After Rowan and Kingston lay down the foundational elements, Fong seasons it with "guitar synthesis" before Wilson ices the track with sax licks and lyrics. Fong notes: "The thing that defines a lot of WAYO songs is an emphasis on chord progressions---really brings out the emotional dynamic of the bass and groove. With a lot of soul jams and hip-hop, there's a lot of groove which you can lock into, but in pop music, there is such a melodic element. We're just taking a lot of hip-hop and jazzy beats and then making them accessible from the pop side of music."

For The WAYO it's not just what you hear, it's what you feel. "We're definitely looking for that emotional response from the audience," says Rowan. "I feel like that's why we relate so much to the idea of soul in our music." Soul as an elemental force bonding both musician to audience and genre to genre guides The WAYO's movement between musical scenes. Fong says: "When we go to another city, there's always this big question of 'Which scene are we going to try and like reach out to?'" Rowan continues, "We feel out of place most places we are because our music is coming from so many different directions. People really separate themselves into scenes; that leaves us in a weird place."

While embracing each scene for its unique characteristics, The WAYO sees them sharing common roots. "We really try to bridge a lot of the gaps that have been created because of campy genres," says Fong. "The punks wear specific kind of clothing, indie kids have to dress a certain way, the rappers need to be wearing like East Coast Lifestyle shirts and stuff. I feel like with our music we're trying to reach out to all of those people. A lot of Charlotte's lyrics have to do with everyday things, emotional perspectives everyone can relate to, regardless of what genre you're coming from."

McGill Music - The WAYO from TVM Student Television on Vimeo.