The war on pizza | City | Halifax, Nova Scotia | THE COAST

The Coast
“You're gonna close me down at 11 o'clock, you're gonna kill our business,” says Triple A owner John Amyoony.

Council’s attack against two slice shops is the talk of the city. But the debate about late hours and noise misses that this is a fight for community.

Monday, Oct. 3, is as per usual, a busy day at Triple A Convenience and Pizzeria. Owner John Amyoony greets his steady flow of customers by name and asks them how their day is going while drizzling donair sauce on slices of pizza bigger than a human head. Today is different though, because he’s also asking customers to sign a petition—one against a new bylaw proposal that would put the legendary corner store in jeopardy. Several pages full of signatures sit on a small table in front of the counter. Amyoony pulls out a folder that contains dozens more sheets, all full. There are hundreds of signatures in total. He says nobody who came in that day declined to sign their name. 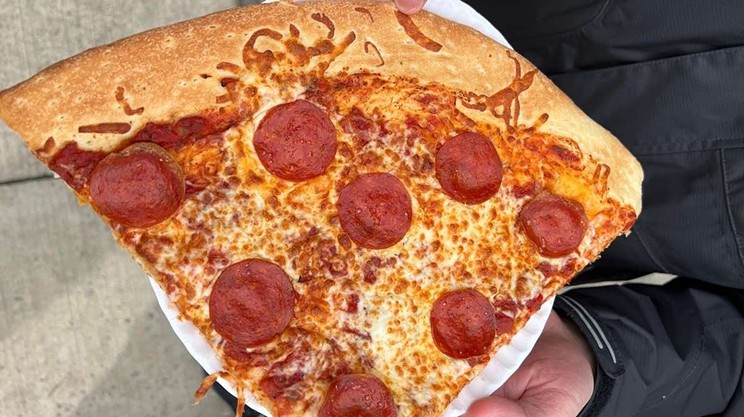 What the law says about the war on pizza: HRM’s beef with late-night convenience stores explained, legislatively.

Last week, area councillor Waye Mason introduced what he called a “muchly anticipated” bylaw that would force convenience stores in residential neighbourhoods to close at 11pm. The bylaw aims to close a “loophole” in current land use laws that allow businesses in a residential zone called RC-1 to serve hot food. Or more directly, late-night convenience stores “can be quite disruptive to the community especially if they're serving pizza and have a lot of folks coming back from downtown, congregating outside eating said pizza,” Mason told council. The bylaw’s first reading passed unanimously.

There are 25 properties (some commercial, some residential) in the RC-1 zone, but only five businesses would have to change their hours, according to a staff report about the bylaw. Two of these businesses are Triple A and Jubilee Junction Convenience and Takeout, popular family-run locales that sit across the street from one another on the corner of Jubilee Road and Preston Street, in a neighbourhood heavily populated by university students.

The Coast
The "free Jubilee" flag at Dal HoCo shows that students can get interested in city politics.

Mason doesn’t actually know what the three other stores are, and no businesses are named in the report. But by consulting the city’s zoning boundaries, it looks like the other three stores are Big General on South Street, Fenwick Convenience on Fenwick Street and Point Pleasant Grocery on Tower Road. None of these are open past 11pm, so this bylaw is very specifically aimed at Triple A and Jubilee Junction, which Mason implied at council. “There was one that was the first one to stay open late [Triple A in 2012] but then there’s the one right across the street started doing it [Jubilee Junction] and there's rumours of others in the zone that would do that, so it's about keeping that from spreading throughout the peninsula,” he said.

Amyoony says about 50% of his sales happen after 11pm, when people come to grab a post-bar-crawl pizza slice, or folks working late shifts who shop for essentials or snacks. The report claims businesses will only lose 10% of their revenue, at most. “You're gonna close me down at 11 o'clock, you're gonna kill our business,” he says. “And mentally you’re gonna hurt me, because to lose everything I established from 45 years ago.

It’s not an exaggeration to say that trips to Triple A and Jubilee Junction for a massive $5 slice of pizza are a pillar of student life in this city. And it’s easy to infer that this bylaw aims to stop them from making these rowdy pilgrimages through the neighbourhood they live in. But there’s a symbiotic relationship between these corner stores and the city’s university crowd. The students keep the businesses alive, and the businesses provide them safety, community and, yes, drunk pizza.

Amyoony says when parents from all over Canada fly in to visit their kids studying here, the students bring their families to meet his family. “We are like parents to them—they call my wife mom,” he says. “They're not a problem. They keep Halifax busy everywhere. They are a little noisy sometimes on the weekend. That's fine. That's only September month because the weather's good. When fall comes and they start exams or midterms, they have no time for that.”

“We can't go around boasting that we have the most universities in any city without being accepting of the fact that we have students.”

And the students, in turn, are protective of the beloved mini Pizza Corner on Jubilee. At a Dal Hoco party on Jennings Street last weekend (before everything went to shit), someone wrote “free jubilee” with black spray paint on a white bedsheet and hung it from a balcony. There’s a sign stapled to a telephone pole in the neighbourhood that reads “Waye Mason wants to ban pizza—tell him he’s not our mom and we can have pizza after 11pm,” accompanied by a screenshot of a memified scene from The Sopranos wherein Silvio Dante proclaims “that’s anti-italian discrimination.”

Georgia Irvine, who lives in one of the many student houses on Jennings Street, says the convenience store bylaw is the talk of the neighbourhood. All it took for students to engage with municipal politics was for someone to try and take away their pizza.

“It's so close to us, and we've been going there for years and everything, like they're like our family,” she says. But there’s more to it than that. “It makes us feel so much safer knowing that there's a store open near us on our walks home late at night,” Irvine says. “Halifax is, no matter how much people say, is very unsafe.

“It's really sad to think that they might have to close. If they can't work after 11, these businesses can't function.”

“My residents will be deeply happy to see this move forward,” Mason told council at the bylaw’s first reading. But certainly not all residents—not the students or the people young and old signing the two stores’ petitions by the hundreds. And not Louise O’Haran, an interior designer who lives a couple of blocks from the establishments. She calls the curfew “a classic case of NIMBY.”

“I've never been bothered,” she says. “First thing you need to recognize is that this is a university town. We can't go around boasting that we have the most universities in any city without being accepting of the fact that we have students.” She adds students in the area are less disruptive after sobering up with a slice of pizza. “Get earplugs,” is O’Haran’s advice to her neighbours.

“I personally love the vibrancy of seeing students. You know, it's part of the nature of living in this particular neighbourhood,” she says. “If you don't like that, you know what I'm gonna say. You're free to live someplace else.”

The Coast
Jubilee Junction owner Michael Habib with pages of signatures—we've obscured names and addresses—in support of the store.

Across the street from Triple A, Michael Habib, owner of Jubilee Junction, is also busy collecting signatures. “We knew we were popular, just didn't know how popular. Now it shows,” he says. “I just need the help of the people in order to oppose this—outcry is the only hope.”

He points out the crucial role community convenience stores play in a neighbourhood. After big stores shut at 10, people still need things: Tylenol, tampons, milk, a pack of cigarettes. Habib says many nurses and doctors who work at the QEII live in the area, and they rely on his store. “We’re part of their lives and they’re part of ours,” he says of the community; the large convenience store chains don’t offer the same kind of connection. “Would people rather have just like the Needs of the world or the Circle Ks?”

Habib says family-owned stores are often underappreciated by municipalities. “With bylaws and rules and regulations, a lot of red tape, you're seeing a lot of these stores fading away instead of making it easier for them to work and succeed and be part of the community life.”

Like Triple A, Habib sees most of his customers in the late hours. “It’s hard to create a business,” he says, “and it’s so simple to kill it by enforcing rules like this.”

The city sent 25 letters to “property owners impacted” by the bylaw, and received no responses. A mere two people chimed in on the city’s website in support of the bylaw. Habib says he never got a letter, even though he owns the building. Mason told CBC that he met with Habib and tried to meet with Amyoony. Habib says they’ve never spoken.

“We were never informed of anything,” says Habib. “In order to force a law down your throat, I mean, this is not communism, nor is it a dictatorship. We live in a democratic society and we should all have a say.”

“It makes us feel so much safer knowing that there's a store open near us on our walks home late at night. Halifax is, no matter how much people say, is very unsafe.”

Amyoony did get the letter, but it was right before Hurricane Fiona hit. So he didn’t get around to writing back to the city, because he was busy serving warm food to long lines of people without power—both Triple A and Jubilee Junction become hotspots during hurricanes thanks to their generators. He says he hasn’t communicated with the city since. “I don't know what he looks like,” Amyoony says of Mason.

On Wednesday, Mason told CityNews that he would like to meet with Amyoony and Habib. City council meets next Tuesday, Oct. 11, but according to The Coast’s accompanying explainer about the legislative timeline, the earliest the bylaw could legally be voted on at council is Oct. 25.