Harrietsfield activist is taking water cleanup into her own hands by becoming the first Nova Scotian under the Environment Act to lay charges as a private prosecutor. 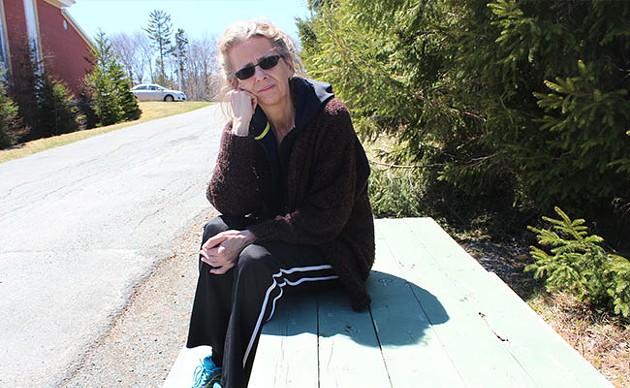 Rebecca Hussman
Harrietfield resident Marlene Brown has been fighting for clean water since 2009.
Despite the many hurdles and setbacks, she has experienced over the years, Marlene Brown refuses to give up the fight to bring safe drinking water to Harrietsfield.

The rural community along the Old Sambro Road has been stuck dealing with the repercussions of an environmental contamination that took place at a construction recycling and disposal site more than a decade ago. High levels of heavy metals such as uranium, lead and arsenic been found in the area’s water, rendering it undrinkable according to the Drinking Water Guidelines.

Since 2009, Brown has been trying to get help for her community to no avail.

“Really, nothing has changed,” she says.

That’s why Brown has decided to take matters into her own hands, becoming the first Nova Scotian to lay charges as a private prosecutor under the Environment Act.

“Marlene and other residents in Harrietsfield have been facing this horrendous situation, basically not being able to drink their water from their local wells, and through no fault of their own, simply because of where they happened to live,” says environmental lawyer Jamie Simpson, who along with Lisa Mitchell from East Coast Environmental Law, will be representing Brown in the  prosecution.

“So we’re taking the unusual step, or the extraordinary step,” Simpson says, “of actually using a provision within the Criminal Code that enables anyone to lay charges against someone who’s allegedly violated or committed an .”

Brown is alleging that the recycling depot’s owners have violated the Nova Scotia Environment Act in two ways: First, by failing to prevent the release of harmful substances into the environment; second, by failing to comply with the terms in the ministerial orders issued to them by the province.

“Charges have been laid under the Environment Act in other situations, but in this particular case, no charges have been made yet” by the province, Simpson explains. “So that’s why we’re taking this step as a private citizen, which has never been done outside of the Criminal Code .”

Basically, Simpson says, they’re going down this route “because the province hasn’t acted,” even though the charges are against the individuals whose operations at the site were proven to have caused the contamination.

Simpson also says that if the prosecution goes forward and Brown to win, having a court order would be different from receiving a Ministerial Order.

“There may be more consequences for violating an order that’s given by a judge compared to an order given by a minister,” he says.

In 2010, the minister of Environment issued an order to the parties who owned and operated at the site in question from the early 2000s up until the department shut it down in January 2013. Shortly after being issued, this order was appealed by one of the parties listed, beginning a tangled series of legal proceedings that most recently culminated in the latest appeal’s dismissal by Nova Scotia’s Supreme Court back in March.

Terms of the orders include ongoing water monitoring of residential wells within 500 metres of the site, as well as paying for and conducting a cleanup. However, the individuals listed in the orders have a history of non-compliance.

“The companies need to comply. They need to clean up the area, they need to address the contamination. Don’t just take down your sign and walk away like it never happened,” says Brown.

In November 2016, minister Miller announced that the government would be providing water treatment systems to eight of the homes that were flagged for having water that was too severely contaminated to drink, brush your teeth with or clean dishes with.

The province is providing funding for the cost of installation, water testing and maintenance for five years, in partnership with HRM.

“We appreciate the systems. It’s a good start,” Brown says. “But there were another 11 homes in the Ministerial Order that are not even being looked at.”

In light of the continued inaction and mounting frustrations, Brown is this weekend’s water walk in Harrietsfield on May and will be asking Harrietsfield district councillor Stephen Adams and Halifax Atlantic MLA Brendan Maguire to participate.

The walk will be from the Harrietsfield Elementary School to the contaminated recycling site and back again—about 500 metres in total.

“People need to know that within that 500 metres, what’s happening,” Brown says.