We love how the Trellis Collective brings pedal power to the pandemic | Reasons we love the city | Halifax, Nova Scotia | THE COAST

Mohammad Aljenadi is giving new life to 100+ bikes and a group of bike mechanics. 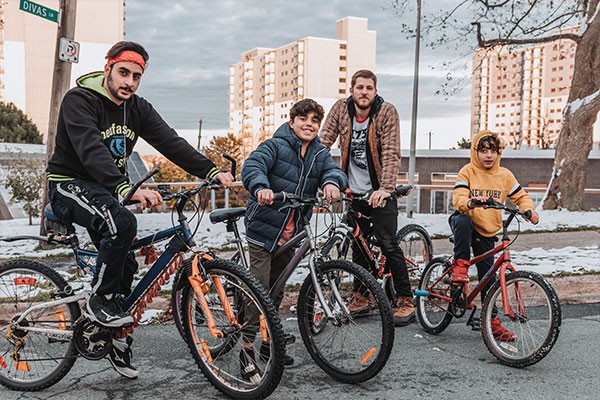 What was the nicest thing you saw during the pandemic?
"My neighbour started fixing up a bunch of bikes for kids in the complex to ride! So many kids are zooming around now."

That neighbour was Grade 11 Citadel High student Mohammad Aljenadi who, with the help of his friend Sam Kamminga, is part of the Trellis Collective. Since Covid swept through Halifax, they've fixed over 100 bikes for kids to zip around on in their Uniacke Square and Brunswick Street neighbourhood.

Aljenadi has been tinkering with bikes his whole life, getting his start in Syria before moving to Canada four years ago. His own bike is deked out with flashing lights, wind-swept tassels and bright blue paint. He encouraged the kids in his neighbourhood to bring bikes they'd found left in the garbage or abandoned on the side of the road, recycling over 60 bikes since the spring. He'd get the parts to fix them up from Bike Again, and Aljenadi even insisted on teaching the kids how to fix things themselves—building up a team of 10 mechanics-in-training.

There's no reason for a bike to be in the garbage, he says; there's nothing that can't be repaired. Even a bike bent in half can be fixed "with a hammer!"

He says gears are trickier than brakes, and the easiest fix is tires­­—and they fix a lot of them thanks to the thrill that comes with whipping your handle bars to the left, slamming the brakes and spinning a back-tire burnout on your very own fixed-it-yourself two-wheel chariot.

The tradition of fixing up old bikes has been around for generations in the neighbourhood, says Kamminga, where a culture of sharing and helping each other out has always existed—long before the buzzword "sharing economy" came about. Someone who used to live in the neighbourhood even started finding bikes out in Hammonds Plains and bringing them down to the Trellis Collective. Which meant another kid would get to learn from Aljenadi about gears and grease and tires and brakes (and a hammer or two) and be off—until something broke or a tire popped and they'd come back for another lesson and the right supplies.

And if kids didn't know how to ride a bike at all, Aljenadi could fix that, too: Starting with training wheels until they could manage on two wheels, and now, he says, "they know how to drive very fast."

Caora is the City Editor at The Coast, where she writes about everything from city hall to police and housing issues. She’s been with The Coast since 2017, when she began as the publication’s Copy Editor.

We love that Halifax came together in grief