Whether you’re a screaming spectator, a competitor or an average klutz knee-deep in mud, the summer’s full of reasons to get sweaty and sporty.

To August 27
Anchor City Rollers
The 2016 season of hell on wheels, AKA the Anchor City Rollers, spun into gear in May, but just because you missed the opportunity to hoot and holler at the season opener doesn't mean you can't for the rest of the summer. Almost as great as watching the violent grace of the city's roller derby squads is screaming out things like "Yeah, Box Punch!" and "Go Carnage Patch Kid!" There are four home games over the summer, the highlight being ACR's Birthday Bash versus the Muddy River Rollers on July 23—it'll be a sweet bout, no doubt.
various dates, Mayflower Curling Club, 3000 Monaghan Drive, anchorcityrollers.ca

June 25
MudCraft
The homegrown option of the summer adventure races sets both six- and 10-kilometre obstacle courses through the woods and farmland in the already filthy-sounding Gore, Nova Scotia. Put on by the same family that brings you the bone-chilling Gore haunted corn maze puts on the fun fitness challenge, placing massive puddles, mucky ponds, things to climb over and under, roll down and jump off between you and the finish line. Be a gladiator, a warrior or register your mini-me in the youth course. It's a hot mess, in the best possible way.
2050 Highway 202, Gore, NS, $75/85, mudcraft.ca

OUT OF TOWN
July 3-10
Antigonish Highland Games
The pure brawn showcased at this event is beautiful. While the historic—153 years running—Highland Games are packed full with piping, drumming, dancing and ceremonial ceilidhs, the true highlight for spectators, and strong-as-hell competitors, is the lineup of competitions. Power pedal at the Cape George Bike Race (July 3), kilt up and tackle the five-mile road race (July 8), yank your way to victory at the annual tug of war showdown (July 9 and 10) or exercise your brain by getting your mind blown by the feats of strength at the Scottish heavy events (July 9 and 10) like caber toss, hammer throw and open stone—AKA lugging, lifting and lunging really heavy shit.
various times/locations, Antigonish, antigonisthighlandgames.ca

July 9
Dragon Boat Festival
This annual summer event fills the beautiful Lake Banook with dragons. Dragon-shaped boats, that is. The Chinese tradition dates back over 2,000 years, but Dartmouth's been in the game for 19, using the team sport as a fun-loving way to raise funds for the Nova Scotia Amateur Sport Fund. Not much into in-sync paddling? There'll also be tug-of-war, water sports, Chinese cultural entertainment and food and drinks happening onshore for onlookers.
Lake Banook, Dartmouth, dragonboat.halifax.ns.ca 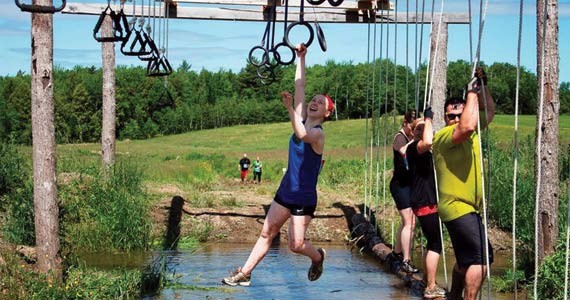 OUT OF TOWN
July 9
Mud Hero
Another event for the outdoorsy types looking to get dirty and sweaty at the same time. For the fourth year running, the six-kilometre course spans hills and swamps and woods out at Ski Martock. You don't have to be an intense athlete to enjoy this terrain, but you should probably be prepared to destroy a pair of sneakers—and ready to party. Mud Hero hosts a badass after-party to stretch out all of those tired limbs.
Ski Martock, 370 Ski Martock, Windsor, NS, $75-$80, mudhero.com

OUT OF TOWN
July 9
East Hants Tidal Run
Again with the mud! This time the sneaker-dirtying athletic challenge brings you to Noel, Nova Scotia, where you'll racing against the world's highest tides. The seventh annual Tidal Run offers both a five-kilometre race and a two-and-a-half kilometre race on the slippery ocean floor—break out the retired kicks for this one.
Burntcoat Head Park, 611 Burntcoat Head Road, Noel, NS, $30, 10am (registration), raceroster.com

OUT OF TOWN
July 22-24
SandJam
During the past handful of summers, over 40,000 sports fans have taken to the Halifax waterfront for SandJam, revelling in just how easy the pros make running and jumping in tonnes of sand look. This year the summer sporting event heads to Summerside, PEI—a perfect excuse for a roadie with a purpose—where it'll host the top four men's and women's teams in Canada, who'll be competing for a cash prize of $10,000. Lube up in sunscreen and dig in.
Credit Union Place, 511 Notre Dame Street, Summerside, PEI, seatlantic.ca August 6


The Milk Run
The only obstacles in this six-kilometre fun-run are all of the dairy products you're invited to graze on along the way. As runners make their way through the pastures, fields, rolling hills and cornfields of the Courthouse Hill Family Farm, there'll be cheese, milk, yogurt, ice cream and more for the sampling. All athletic abilities and dietary needs are invited (you don't have to indulge) to get a little work out and learn more about the life of a dairy farmer. Lace up, pop a Lactaid and see if milk really does a body good.
Courthouse Hill Family Farm, 2240 Hwy 202, 11am, $40/$50, themilkrun.ca

OUT OF TOWN
August 7
The Color Run
See stars every time you attempt running any further than from the couch to the fridge? What about rainbows? Get a blast of the tropics by running this happy-go-lucky five-kilometre race—complete with palm trees and island music—during which athletes will be blasted with neon colours and island scents. It's the perfect low-impact exercise for first-time racers, pina colada lovers and unicorns. The Color Run also partners with a local charity to give back whilst givin' 'er.
Hants County Exhibition, 249 Wentworth Road Windsor, 9am, ca.thecolorrun.com

OUT OF TOWN
August 10-13
Chester Race Week
Chester is swarming with sailors and spectators for this annual regatta weekend, which the fine folks at the Chester Yacht Club have been putting on for over a century. Whether you're crew or cool to soak it all up from dry land, it's a social summer weekend packed with parties, live music, dock yoga and refreshments worth day-tripping to Chester for. Start pressing your best khakis now.
21 South Street, Chester, chesterraceweek.com

OUT OF TOWN
August 20-21
Kejimkujik Canoe Festival
Everybody in the park's getting tippy at this annual weekend of paddling, put on by your pals Parks Canada and Canoe/Kayak Nova Scotia. Experts and first-timers can enjoy this family friendly water-logged weekend of canoe and kayak demonstrations and activities. Join the canoe congo line!
Kejimkujik Park, 3005 Main Parkway, Maitland Bridge, parkscanada.gc.ca/keji 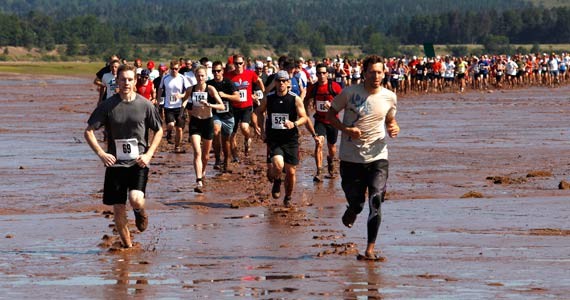 Len Wagg
Running on the Bay of Fundy

OUT OF TOWN
August 21
Not Since Moses
Screw walking on water, this annual summer event encourages you to run on it! Or where it's supposed to be. The Not Since Moses race has been bringing curious runners and walkers to the Bay of Fundy's Sand Point and Soley Cove (near Five Islands) for years, to take on five- and 10-kilometre races against the sublime, record-high tides, slipping and sliding all the way. Aimed at all ages and athletic abilities, Not Since Moses is an unforgettable summer experience more than a race—you versus nature, with a backdrop fit for National Geographic.
Five Islands, 8:15am, $60, notsincemoses.com