North Preston’s soul group has many generations of talent. 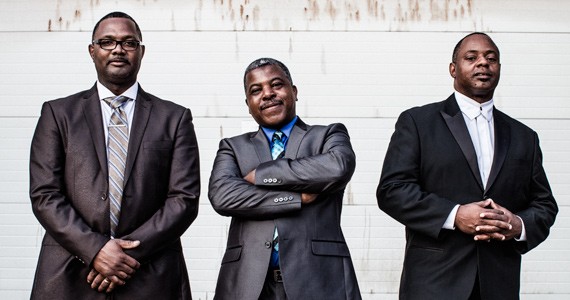 For Wallace Smith, music has always been a fact of life. "I was sort of born into it," explains Smith, a member of the North Preston soul gospel group The Sanctified Brothers. "I don't think there's ever a day that went by in the whole time I've been alive that singing hasn't taken place in the family home."

The Sanctified Brothers electrify crowds today with their deep, layered harmonies, spirited stage presence and tendency to flit between songs and feverish crowd-pleasing banter. The band's popularity should come as no surprise, because Smith's musical roots run deep. Growing up he was surrounded by a rotating cast of local music legends: practically everyone in his North Preston circle played music. As a child his father, Rev. Wallace Smith Sr.—pastor at North Preston's Saint Thomas United Baptist Church and a member of The Sanctified Brothers—often hosted band practices at their home with his group at the time, The Rockin' Rebels. His bandmates included the likes of Bucky Adams—who during his lifetime shared the stage with BB King and Louis Armstrong—and the late Kenny Clattenburg, drummer in the Dutch Mason Trio.

Smith picked up the bass when he was around eight years old, and it was only a matter of time before he'd make the natural transition to playing with his father on stage. Smith Sr. formed one of Canada's biggest gospel groups in the late '70s, The Gospelheirs, inviting his son onboard as a bass player and backup singer. The family tradition continues today—Smith's daughter Reeny is an award winning vocalist and pianist in her own right, and his son JR performs with the Sanctified Brothers.

The Smith family is a tight-knit group, singing together in the Hallelujah Praise Choir, which Smith directs at Saint Thomas United: "I don't know if you could even get a pin between them," he laughs.

The Sanctified Brothers were a happy accident. The group got its start when Smith performed an a cappella song with some of the tenors from the Hallelujah Praise Choir. "While we were singing it, one of the deacons in the church stood up and said 'Wow you guys sound like The Deep River Boys'"—the American gospel group—"so he nicknamed us 'The Deep River Boys.'" They ran with that nickname until they had so many requests for performances that they had to go official in 2009, and named themselves The Sanctified Brothers.

Today the group—rounded out by Danna Wills, Mike Smith, Marlowe Smith, Shawn Downey and JR Smith—is shaking up perceptions of gospel music with fresh twists on classics, which they infuse with elements of blues, funk and rock.

"It's awesome, because it's gospel music, but it's not your traditional gospel music. Sometimes we'll do a traditional song, but we always try to add some variety to it," says Smith happily. "There's never a dull moment."