Informed by her past, mindful of the future, the Toronto chef is making her mark on Halifax. 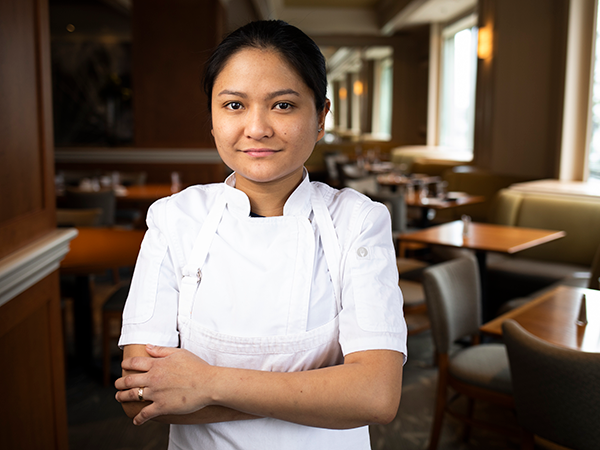 RACHEL MCGRATH
For Novo, food is a creative freedom of expression and form of storytelling.

F or Anne Novo, cooking isn't just providing sustenance. Cooking creates community, a menu can tell a story, a meal can provide comfort. She brings all of that, and more, to the table.

Despite growing up surrounded by food, becoming a chef wasn't on Novo's radar. She was studying to become a nurse when she followed her mom to Canada in 2009. She was 20 years old and it was cold in Toronto. Unsure of what to do, unhappy with nursing, she spent her time cooking.

"It gave me a kind of like a freedom of expression to be creative, but using food," Novo says.

When she told her family she wanted to cook, they were appalled. When they told her she was going to be poor as a chef, she replied: "Well at least I'll be happy."

Her first kitchen job was at a Famoso Neopolitan Pizzeria in Toronto. Then she decided to go to school for culinary management; she graduated from George Brown College in 2014. From there she's moved up, up and up.

Novo joined the elements on hollis kitchen, in The Westin hotel, last summer. After 10 years in Toronto working with some of the best chefs in the city, she moved to Halifax where she'd found a vibe she connected with.

Everyone seems to know each other, she says: "I feel like there's a sense of community which is kind of lacking in big cities—and they're very supportive of local businesses, too."

Novo's cooking style is completely dependent on where she is. She works with locally sourced ingredients, and makes a lot of creative decisions based on what's currently at its best. She uses fruit as an example—berries specifically. Eating a strawberry that's in-season versus one that's not isn't even comparable.

"Every ingredient depends on the season," says Novo, "and they taste way better if you pick them in the right time."

When she creates a menu that's about her and not about the restaurant, she's telling a story. One dish might represent what she used to eat as a kid and the feelings of nostalgia it conjures up for her. "I want the people to experience something the same," she says. "At Famoso, there's a soup there that I really, really love. And I've been bringing it wherever I go because it just reminds me of my first odd job."

Novo also thinks about what she can do as a chef to minimize waste. She uses every part of the food she can ("like for example, a carrot; like I can use the tops to make chimichurri or salsa verde").

Growing up, she spent her summers helping out on her grandparents' rice farm in the southern Philippines and she's inspired by her grandfather and father's environmentalism.

"So those three things, I always try to make sure that it's in the plate: The aesthetics, the smell and obviously the taste."

The passion Novo has for incorporating local food and challenging herself to cook no-waste comes from her own journey.

"My mentors always said, 'You have to cook what's based on your story and your history and roots.'"