The roast of Gloria McCluskey is happening in April 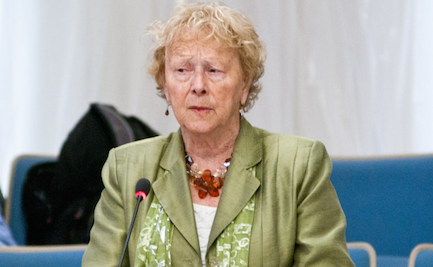 If you want to watch Mike Savage make fun of Gloria McCluskey, it’s going to cost $50 a plate.

Next month, various political dignitaries and community well-wishers will gather together on April 23 in Eastern Passage to do what some on the internet have been doing for a while now, and roast the retiring Dartmouth Centre councillor at a fundraising event for the Eastern Passage Lions Club.

It won’t be the first mock confrontation between the two. On April 14 McCluskey is scheduled to roast HRM’s mayor at an event to raise funds for Alderney Landing. She was also roasted by Mike’s father, former premier John Savage, at a charity dinner for Alice Housing back when she was mayor of Dartmouth.

In fact, McCluskey seems to be somewhat of a veteran when it comes to roasting public officials. She recently served as roastmaster at an event held for HRM’s outgoing-deputy CAO Mike Labrecque.

“I did stand-up comedy a couple of times, for one of these fundraisers,” McCluskey says. “So they asked me to roast him.”

Her material that night, she says, included some shots at former CAO Richard Butts’ fondness for soda pop.

“I said, ‘Mikey, we were so proud you never started drinking the Pepsi. You saw what it could do to your body.’”

After more than two decades in municipal politics, McCluskey is no stranger to criticism herself. The outspoken, sometimes controversial 84-year-old councillor isn’t seeking reelection this fall over concerns her health could fail in the next four years, forcing taxpayers to foot the bill for a by-election.

McCluskey says she has no set plans for her retirement right now, though she may write a book about her life and time in office.

Tickets for the roast are $50 per person, with all proceeds going to support Lions Club programs. Veteran broadcaster Frank Cameron will be Master of Ceremonies at the event, which will also feature raffles, a chicken cordon bleu dinner and live music. More information can be found here.

The Queen and I