A Q&A with tarot reader and author Oliver Pickle 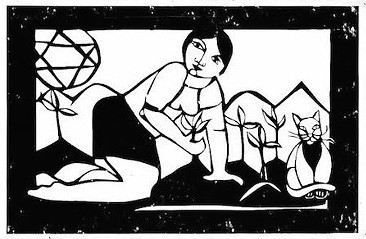 Ruth West
The "Daughter of Pentacles." This card’s placement in a reading denotes ambition and wellbeing.

To some, tarot card readings are hokey carnival scams or sleepover activities, but for many LGBTQ individuals unwelcome in traditional religious doctrines, tarot readings were and are an inviting way to express their spirituality. Montreal author and professional tarot reader Oliver Pickle wrote She Is Sitting In The Night: Re-Visioning Thea's Tarot about revamping a decades-old feminist tarot deck. The book launches on Sunday at Venus Envy with a book signing and tarot readings. Pickle spoke to The Coast about the book and its feminist roots.

Your bio mentions that your debut as a professional tarot reader was an accident. How did that come about?
I hadn’t ever pursued a tarot reading or my own deck–my first deck was a gift from someone who I don’t think expected me to use it. But the deck, as many do, came with an instructional booklet, and alongside friends I started doing readings with roommates and their unsuspecting visitors, on the sidelines of baseball games, at bars, etc. It kind of stuck, probably because it worked as a conversation starter but also more fundamentally because it helped create connections and resonated with people.

Why do you think that queer folks have historically had such an important connection to tarot?
I can’t speak for queers in general, but in my experience people crave ritual and meaning-making tools, and queers (along with many populations that are denied mainstream versions of these things) find the ones they can access. And then we adapt them to our needs. And tarot is very adaptable.

Why are alternative tarot decks necessary?
Tarot works largely through imagery and the querent’s response to images. It’s amazing when the images are meaningful for you or even reflective of you. And it’s alienating and infuriating when they aren’t.

Why did Thea's Tarot stand out amongst other queer or feminist tarot decks?
My friend Rima Athar introduced Thea’s Tarot to me, and she’d found it after a long search for a feminist deck. She writes about this search in the foreword to She Is Sitting in the Night. So it stood out for her, and then I really liked it: it’s black and white; it’s true photocopies of papercuts; it’s varied and visceral and gorgeous. Most importantly, and I think this is often how people choose their favourite decks, it spoke to the card meanings I was already familiar with and also added layers to these.

How did you reimagine a distinctly lesbian tarot deck to reflect more modern, fluid ideas of gender?
Again, this re-imagining was at Rima’s request when she suggested I write the book. She and I share a lot of ideas around politics and relationships and gender based on our friendship and communities, and so it felt like a regular approach for both of us.

The images in Thea’s Tarot are visibly fluid and varied, gender-wise. Their creator, Ruth West, made them in the context of lesbian feminism in the early 1980s, when women-centred art was at a peak. I read them in a context of gender self-determination and fluidity, which is particular to this historic moment and the communities I move in in Montreal. The context is the main difference; the images themselves don’t require a lot of re-imagining. Tarot kind of requires that you imagine yourself and the people in your life into the images.

Do you think tarot is as relevant in queer communities today as it was historically?
I don’t know. People are still making decks, which suggests that they're relevant: the Collective Tarot has been really popular in the past decade, and a few exciting new ones are coming out soon, like Cristy Road’s Next World Tarot and the Slow Holler. None of these is exclusively queer, but I would place them all in some sort of queer lineage.
I suspect that the longing and magic and desire for self-representation don’t change a lot over time, and I think part of the beauty of tarot is its versatility and adaptability, and I think it’s so great that people continue to create decks and read in ways that work for them.

Has the actual practice of a reading changed since Thea's Tarot was initially used?
There are definitely tarot spreads that have existed since that time, which people continue to use. I imagine that people have always adapted their readings to their contexts, so they shift naturally over time. Also there are a lot of tarot apps and websites now! So it’s easier to learn the meanings of the cards without books. I’ve always found books more useful though.