Steve Martin's revamped Inspector Clouseau is, you know, for kids.

The laugh-out-loud comic genius of Peter Sellers' Pink Panther films isn't represented in the series revamping. That's why Steve Martin's take on detective Jacques Clouseau has been so roundly dismissed. Except here's the thing: The Pink Panther 2, like 2006's The Pink Panther, is consciously a children's film. At that, it's not a particularly good one, but it serves the same need the Ernest movies did when many of today's critics were kids. And as that era's childhood comedy totems go, Martin's Pink Panthers are still better than the Police Academy movies.

His Clouseau is a marble-mouthed dimwit, who thinks he's smarter than everyone in the room. "You fly to Paris tomorrow," he's told. "But I cannot fly," Clouseau replies. Jokes like that are dumb enough that they become funny by virtue that someone bothered to write them.

When master criminal The Tornado is stealing world artifacts, Clouseau is placed upon the detective "Dream Team." His sense of French supremacy when partnered with other global representation is the source of most of The Pink Panther 2's humour.

Though the movie (with Jean Reno, Emily Mortimer, Alfred Molina, Jeremy Irons, John Cleese and Lily Tomlin) is essentially junk---it needs a bigger sense of scale, and more imagination in its slapstick---it's interesting how successfully Steve Martin refashions himself as a comedic hero for grade-schoolers. He plays Clouseau as a distinctive character from where Sellers took him. While abandoning his original fans, Martin is more relevant with The Pink Panther 2 than Al Pacino and Robert De Niro have been in their recent films.

The Pink Panther 2 is not showing in any theaters in the area. 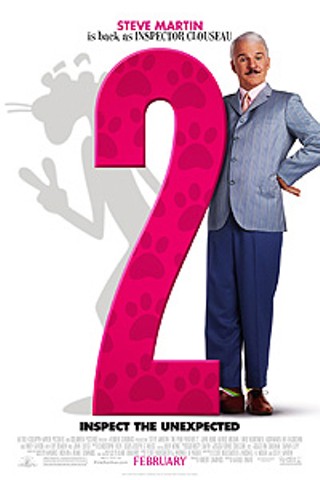