The patience of Janie Bogardus

Jessica Emin
“Mark is an inspiration, I’ve wanted to work with [him] ever since I was in culinary school,” says Janie Bogardus, about her current boss and owner of The Watch That Ends the Night, Mark Gray. The Dartmouth restaurant and bar opened in November 2017 and Gray, who was the opening chef, recently bought it from its original owners. Bogardus continues to work side-by-side with Gray, but with responsibility: She’s taken on the role of head chef.

It seems natural that Bogardus became a chef, listening to her describe her upbringing, living with her parents and three brothers on a hobby farm, eating eggs and drinking milk from their own property. They would make their own cheese, too. 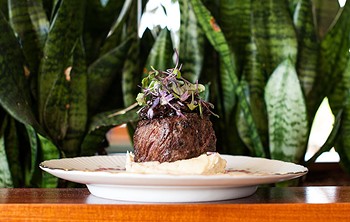 Jessica Emin
Getaway Farms steak, roasted garlic mashed potato, shallot marmalade and urban blue cheese butter
“I remember being five years old, licking the butter wrapper as she made cookies,” she says, crediting her mother for getting her into the kitchen early. The first thing she learned to make was tomato sauce from the tomatoes they grew.

Bogardus cut her teeth in kitchens in her teens before going to culinary school at NSCC. Her first kitchen job was at The Ardmore Tea Room as a dishwasher and busser at the age of 15. She was in awe of the speed and routine involved with cooking.

“I would just watch the line cooks pumping it out,” she says, until one day during a rush, she asked if she could help, and they let her make toast for about 10 minutes before she felt like she was getting in the way and slowing them down. That was just the beginning.

Since graduating NSCC in 2015 Bogardus has worked as sous-chef at Bistro Le Coq and Brooklyn Warehouse before joining Gray’s team at TWTETN. Becoming the head chef means that Bogardus has an entire menu to play with, and with all the food made in-house and all product locally sourced, that means the menu is constantly changing based on availability and the seasons.

Ideas for dishes have to be supported by what is available or already preserved, says Bogardus. She keeps books and written notes of ideas and dishes and then when something pops up locally that will work with one of those ideas, it might make its way onto the menu. She won’t buy from a big food supplier that orders international produce just to fulfil an idea. 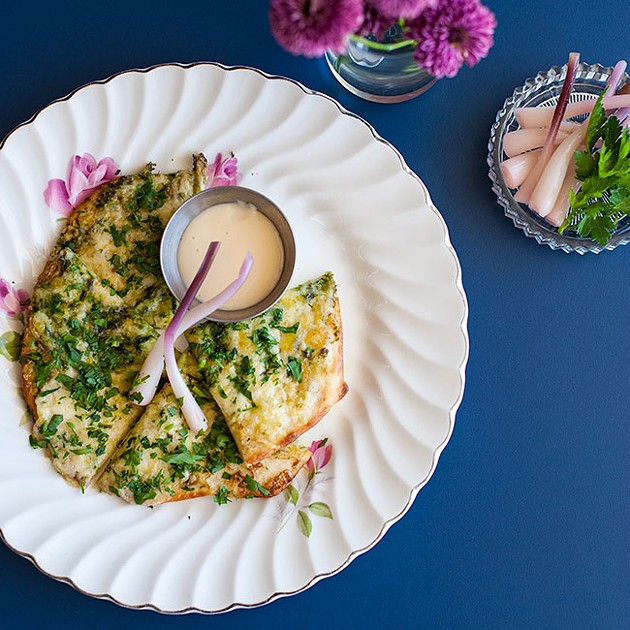 Jessica Emin
Garlic fingers made of house-made naan bread, ramp butter, Cows extra old cheddar and donair sauce
“I really like using wild foods,” says Bogardus, who works closely with local foraging company East Coast Wild Foods for fun and interesting wild produce, like sustainably harvested ramps from Ontario, morel mushrooms from BC or local spruce tips which recently went into flavouring a creme brulee on her menu.
Sarah d’Apollonia, East Coast Wild Foods’ owner, brings Bogardus new products to try when she is doing deliveries. Bogardus says having that sort of relationship with local suppliers, farms and growers crucial to TWTETN’s menu. She also works closely with Four Seasons Farm for the majority of her produce and Getaway Farm for beef and pork.

Pickles, ferments and cured meats are also fundamental to the menu. Bogardus needs to make like a squirrel and save up for leaner months when her local produce suppliers aren’t harvesting. And though she likes dreaming up new concepts and food ideas, sometimes the simplest things get her the most excited, she says, like a s’more she made for the dessert menu. While the idea is classic, she makes every component in-house, from the graham cracker to the marshmallow, which is the added challenge.

In addition to having a creative outlet, Bogardus says that one of the best parts of working with Gray and their team is the level of organization.

Jessica Emin
Black olive gnocchi with roasted shallot, sun dried tomato, goat cheese and pumpkin seed pesto
“We’re both Capricorns, everything is typed up, everything has a place,” she says with a laugh. “It’s nice to be in an environment where everyone puts in 110 effort.”

Whether she is preserving local seaweed to emulate salted capers or curing meat for charcuterie, Bogardus is focused and meticulous. “Good things take time,” she says. With the style of TWTETN relying so much on local produce, preserves and charcuterie, patience and planning key.

“I never had a microwave growing up, I ate my first McDonald’s cheeseburger in high school. I’m not going to Costco and buying the naan”—she says pointing to the garlic fingers currently on The Watch’s menu—“everything is from scratch.”
Although she says people tried to dissuade her from making this her career—because it was too high pressure or too hard—Bogardus is hooked.

“It’s like a sport, it’s exciting. You get such a feeling of happiness when people think the food is great.”

Third Season Food and the providence of ingredients