The past is present on the Juanniversary | Opinion | Halifax, Nova Scotia | THE COAST

Hurricane Juan made landfall around Peggys Cove, west of the city’s core by about 40km, on September 28, 2003, wreaking havoc on trees, buildings and power lines. That was 19 years ago, but it might as well have been today. When this Juanniversary Wednesday began, more than 100,000 people were still without power in the wake of Hurricane Fiona.

In The Coast’s world, our office lost electricity during Juan, so we scrambled to set up a satellite headquarters in the Khyber Building, where the power was still on, to produce a newspaper. Here’s what that looked like:

After Fiona, which hit on Friday, the office had power but no internet, and nobody’s cell phone had reliable signal, so again we scrambled to do journalism. For a case of deja vu, here we are set up in the Halifax Central Library’s Room 302: 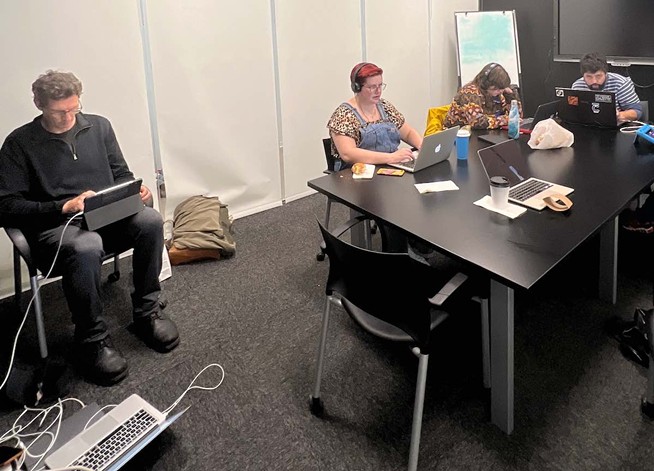 It’s depressing to look back on the past 19 years and realize what has—and hasn’t—changed between the storms. How did Fiona manage to thump Halifax so hard when it made landfall 200km to the east, around Canso? Because global heating is making hurricanes bigger and stronger. Why aren’t the utility companies better prepared for these predictable, worsening disasters? Because in a monopoly (Nova Scotia Power) or oligopoly (Rogers, Bell Aliant, Eastlink), doing nothing while charging more is the simplest way to make profits.

Will it take a revolution to shake the companies out of complacency? Let’s not wait another 19 years to find out.

If your device can spare the power, take a wander through the archive of Coast stories we produced immediately after Juan struck.